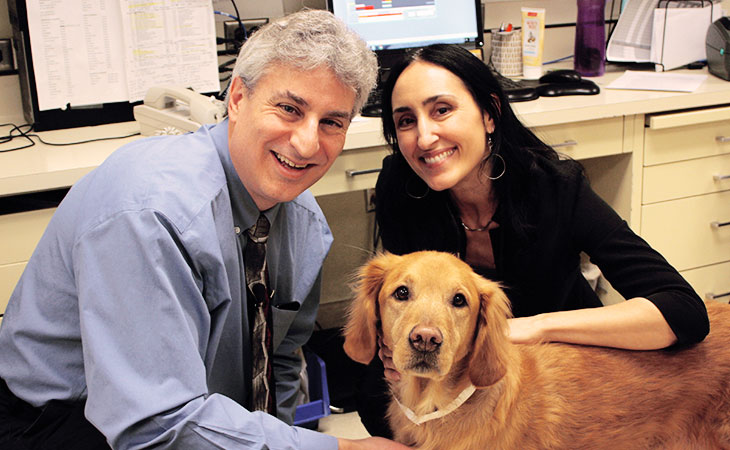 A University of Minnesota study evaluating a new homegrown drug is resulting in improved survival rates for dogs with a cancer called hemangiosarcoma (HSA).

Canine HSA is a common, aggressive, incurable sarcoma. It is remarkably similar to angiosarcoma, which affects humans. Both cancers typically spread before diagnosis, and the survival time for those affected by these cancers is extremely short, even with aggressive treatment. Only 50 percent of humans diagnosed with angiosarcoma live longer than 16 months, and fewer than 50 percent of dogs with HSA will survive four to six months after diagnosis.

HSA is a cancer of the blood vessels. eBAT was selected for this study because it simultaneously targets the tumor and its vascular system, Vallera says.

The drug was given to 23 dogs of various breeds with HSA of the spleen. These dogs received three treatments of eBAT after surgery to remove the tumor but before conventional chemotherapy. The drug treatment improved the dogs’ six-month survival rate to about 70 percent. Five of the 23 dogs lived more than 450 days.

The results were published February 13 in the journal Molecular Cancer Therapeutics.

“This is likely the most significant advance in the treatment of canine HSA in the last three decades,” says study coauthor Jaime Modiano, V.M.D., Ph.D., a professor in the U’s College of Veterinary Medicine and a Masonic Cancer Center member.

These results, combined with the similarities between HSA and angiosarcoma in humans, make a case for translating this drug into clinical trials for human cancer patients.

“This drug was invented here at the University of Minnesota, developed here, manufactured here, tested here, and showed positive results here,” Modiano says. “We would also like this drug to achieve positive outcomes for humans here.”

When graduate student Adam Steiner walked in and announced, “My rats are expressing regret,” Department of Neuroscience professor A. David Redish, Ph.D., could hardly believe it.