When third-year medical student Tim Kummer first met Tommy Watson in the Minneapolis VA Health Care System primary care clinic, he wasn’t just meeting “a diabetic” or “a rehab patient.” He met a cheerful, loquacious man who has stories to tell and a firm handshake to share — and who also happens to have diabetes and a couple of other ailments that make him a once-a-week regular at the VA. 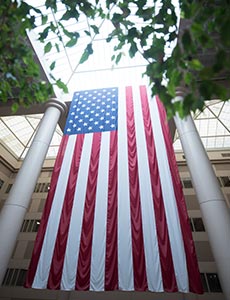 “He came in and made me feel so comfortable,” says Watson, remembering when he met Kummer. “I love that guy. He’s a good communicator and a good listener — he’s going to be a great doctor.”

In traditional third-year training — known as “block training” — Kummer might have met Watson once and gotten a quick overview of his case from the resident; within a couple of weeks, Kummer would have moved on to his next block in a different hospital, perhaps never thinking about Watson again. But as a student in the U Medical School’s new VALUE (VA Longitudinal Undergraduate Medical Education) clerkship, Kummer is spending 10 months at the VA working with Watson and other veterans as they grapple with everything from diabetes and gastrointestinal problems to psychiatric, cardiac, and orthopaedic complaints.

When Watson’s primary doctor first asked him if he’d be willing to work with Kummer, Watson was enthusiastic. “It’s very important what these students do,” he says. “Not that we vets are special, but we have been through a lot, and if I can help train a doctor who might help other vets someday, sure, I’m going to do that.”

If block training is the medical school equivalent of speed dating, longitudinal training is more akin to a date that turns into a serious relationship. In his time at the VA, Kummer will not just learn about his patients’ illnesses, he’ll call them at home if they miss an appointment. He’ll sit with them in clinics, meet their families, learn whom to call when they need help he can’t provide. And if they lose their medical battles and move into hospice, he’ll be there with them as they die.

A richer way of learning

“On a two-week rotation, students can be more detached because they’re not likely to ever see the patient again,” says Nacide Ercan-Fang, M.D., a University associate professor in the Department of Medicine and codirector of the VALUE clerkship; Amy Candy Heinlein, M.D., assistant professor of medicine and a general internal medicine physician at the VA, is the other codirector.

For students in fast-paced training blocks, Ercan-Fang says, patients can be reduced to a diagnosis: “the bypass guy,” “flank pain in bed two,” “a breast biopsy.”

“In the VALUE program,” she explains, “we assign 30 or so patients to each student, and they own those patients. Whether they come in for surgery, for an eye appointment, an orthopaedics checkup … the student follows them through every clinic, every hospitalization for 10 months. They develop connections and commitments to patients like I have never seen before.”

Teaching students in “longitudinal integrated clerkships,” or LICs, versus block rotations that change every two to six weeks is not a new idea — in fact, the Medical School established the nation’s first LIC, the Rural Physician Associate Program (RPAP), in 1971 to encourage med students to consider rural practice. MetroPAP (Metropolitan Physician Associate Program) and UCAM (Urban Community Ambulatory Medicine) are similar programs for U med students interested in serving urban communities. VALUE at the VA is the newest LIC option.

“A longitudinal clerkship is a much richer way of learning,” says Anne Pereira, M.D., M.P.H., the Medical School’s assistant dean for clinical education. Pereira’s challenge is to see that the Medical School’s clinical training curriculum evolves to keep pace with the fast-changing world of health care.

“Health care has become more team-based, more patient safety–based,” she explains, “and our curriculum needs to be responsive to those changes.”

According to Pereira, studies have shown that students educated in LICs acquire the same medical knowledge as students who go through block training, but they have higher levels of satisfaction with the education process and develop a sense of themselves as doctors at an earlier point in their training. And the preceptors — doctors who supervise and mentor students closely throughout the length of the clerkship — have reported strong feelings of professional satisfaction as they watch the students grow and develop.

“Medical students want terribly to really contribute to patient care in a meaningful way,” Pereira says. “When students are in a given site for a longer period of time, it’s easier for them to add meaningfully, not just to the care of a patient, but to the hospital itself.” 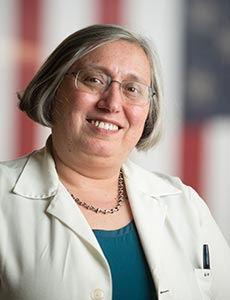 The lanky and outgoing Kummer is in what he calls his second career, having already worked in health care as a nurse.

“I applied for the VALUE clerkship because I really liked the idea of having a panel of patients whom I would learn from longitudinally,” he says, “and having preceptors I could really build relationships with.”

Originally assigned 38 patients, Kummer has learned quickly that working in an extended clerkship is much different from experiences he’s had on short rotations.

“I’ve had three patients pass away already,” he says, “and two others with terminal cancer. Seeing them go through their illnesses, learning to deal with the emotions of not being able to help fix them is something that doesn’t happen in a block clerkship.”

He thinks about his patients a lot, he says, even when he’s home with his wife and two young kids. He’s gotten attached, too — he grins when he talks about one patient in his late 70s who’s had multiple head bleeds but still loves to get out on the ice and play hockey.

Kummer says one thing the VALUE experience is teaching him is that he tends to get too attached, and he’s now considering whether emergency medicine might be a better fit for him.

“This program is definitely what I hoped it would be,” he says. “It’s a really unique educational opportunity to follow a patient from primary care to a specialty clinic and back to primary. In a block rotation, those things would never overlap.”

“We’re getting great exposure to medicine, but we’re also learning about health care systems and how they work. We’re experiencing what it’s like for a patient to have to go through a hospital, to many different clinics, and what a huge burden it is for them to collect all that information, to take that all in.”

Another student, Joe Bryant-Huppert, who has 35 patients, sums up the experience as “huge.”

“From Labor Day to Memorial Day,” he says, “we get such focused attention from practicing physicians who are really dedicated to sharing their knowledge. We get to know them, and they get to know us in ways that residents who spend short periods of time with students in a block rotation never do.” 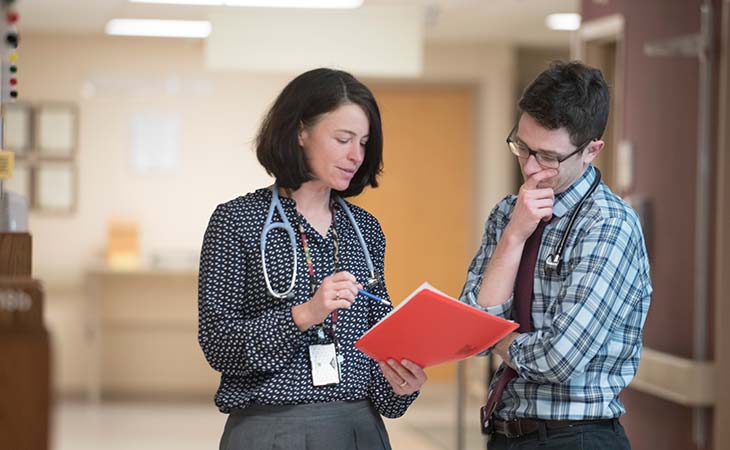 Mentor-mentee pairs like Kimberly Olson, M.D., and Tim Kummer develop a deep level of trust and camaraderie over the course of the 10-month VALUE clerkship experience. (Photo: Scott Streble)

When Pereira mentioned that VALUE students contribute not just to the care of patients but to the hospital itself, she was talking about the curriculum requirement that each student design and implement a project geared toward improving patient safety or care quality at the hospital.

Kummer and his partner focused their project on the emergency department (ED), where “throughput time” is always under scrutiny.

“How long does it take from the moment the patient is interviewed by the triage nurse to the time the medical team comes up with a decision to either admit or release [the patient] with a set of orders — that’s the ultimate number they look at in the ED to judge how efficiently and how safely staff deal with patients,” he says.

Hoping to improve throughput times, Kummer and fellow student Nate Juergens designed a protocol and standard sets of orders for handling four of the most common complaints seen in the VA’s ED: chest pain, shortness of breath, blood in the urine, and flank pain. Their protocol is now being used in the ED and will be evaluated for its effectiveness before the students finish their clerkships in May.

Bryant-Huppert and del Valle have tackled other common problems: del Valle has devised a system of brightly colored stickers to quickly identify key players in emergency code situations, and Bryant-Huppert, who’s interested in anesthesiology, is working on a protocol to decrease rates of postoperative delirium, a condition that’s often seen in elderly patients.

“Part of the reason we were chosen as the site for this clerkship is that the VA has a long history of working in teams to improve patient safety and care issues,” says Ercan-Fang, who, in addition to the education roles she fills for the U, has been a staff endocrinologist at the VA for 16 years. “By developing these quality improvement projects, the students learn more about how hospitals work, and the hospital gets a lasting legacy of their time here.”

No one works more closely with the VALUE students than their preceptors, the practicing physicians who care for patients at the VA, but now also have to take time to teach and monitor students for 10 months. It’s a big commitment, and one that some doctors feared would overburden their already heavy loads. But listening to VALUE preceptors talk about their actual experience is enlightening, even inspirational.

Kimberly Olson, M.D., Watson’s primary doctor and Kummer’s preceptor, says this: “Working with Tim has been energizing and fun — it’s so much easier to invest in someone for the long haul. I do put in extra time preparing information for Tim, or helping him work through particular problems, but it’s so much fun, it doesn’t feel like work.”

Another preceptor, Peter Weissmann, M.D., has become a big fan of the LIC-style of learning. “In typical rotations, it’s tough to evaluate student performance after spending so little time with [the students]. But here, watching the student grow and learn over 10 months is tremendously satisfying — actually one of the most rewarding experiences of my career.”

If deans, directors, preceptors, and students all love the longitudinal approach to learning medicine, why not make these clerkships the rule rather than the exception?

“Our vision is that, in the next five to 10 years, every student will have some sort of longitudinal placement,” says Pereira, who is working on plans to roll out two more VALUE-style clerkships in other hospitals as early as 2017. But with 230 medical students to place each year, her challenge is to find enough clinical sites to support the clerkships.

From Watson’s patient perspective, this style of training is a no-brainer. “I already have the greatest doctor, Kim Olson, at the VA. And now she’s teaching Tim to be a doctor? That’s fantastic. And, Tim, I can tell — he has an ear and a heart, and they’re connected. That’s what we need for our doctors.” 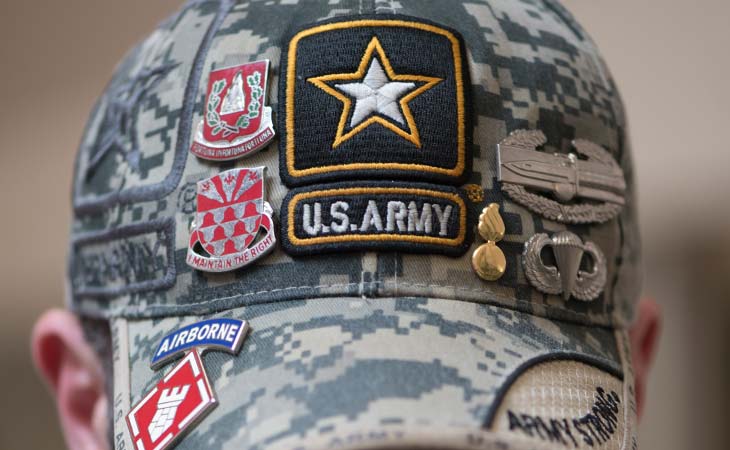 The Minneapolis VA Health Care System has one of the largest education and training programs in the Veterans Affairs system and boasts a particularly strong connection with the University of Minnesota. Celebrating a 70-year partnership with the nation’s medical schools this year, the U.S. Department of Veterans Affairs provides clinical training in nearly 40 health care professions. Here’s how the numbers line up:

10 length of the new U of M VALUE clerkship, in months

70 years the VA has partnered with U.S. medical schools