You’re hunkered down with your study group, prepping for an exam, when you get a frantic call from your sister. Things are bad at home. Really bad. Your mom is hurt, and your younger brother and sister need you right now. Your family is in crisis, so you have to go.

But you’re also a first-year medical student who fought hard — over six tough years — for your place at this table and you have to take a big test in a few days. You can’t risk putting school on hold now, so you have to stay.

What do you do?

University of Minnesota Medical School student Dwayne Gibbs went to his family that day. Then he went to Scott Slattery, Ph.D., director of the Medical School’s Office of Learner Development, and said, “I need help.”

Cognitive overload. Unexpected illness. Family emergencies. For students, all of this, and more, can trigger mental health concerns ranging from anxiety to clinical depression to suicide ideation. If not diagnosed and treated, those conditions can knock students seriously off course — or worse: tragically, in 2018, a U of M Medical School student and a recent graduate both took their own lives.

“When those deaths happened, everyone here agreed: supporting student mental health and wellness needs to be the primary lens through which we view everything we’re doing,” says Kaz Nelson, M.D., associate professor and vice chair for education in the Department of Psychiatry and Behavioral Sciences and chair of the Medical School’s Scientific Foundations Committee.

Minnesota is not alone; medical students’ mental health is a global and growing concern. As reported in a recent Journal of the American Medical Association article, a systematic review of almost 200 peer-reviewed studies exploring the prevalence of depression or depressive symptoms in medical students worldwide between 1982 and 2015 found that 27.2 percent of the students screened positive for depression, but only 15.7 percent sought psychiatric treatment. More than 10 percent of students had suicide ideation, which is a strong predictor of attempted suicide. According to the American Medical Student Association, medical students are more than three times more likely to die by suicide than similarly aged people in the general population are.

Nelson is on the team, focusing primarily on graduate medical education, as are Michael Kim, M.D., assistant dean for student affairs, and Slattery, who both work with undergraduates.

With strong support from the top — including from new University President Joan Gabel, who has singled out student mental health as one of her top priorities — the team has not been tentative in its approach to the problem.

“Achieving well-being is about changing the culture,” says Rothenberger, “so we’re approaching this in a broad way that’s both longitudinal — for students, trainees, and people in practice — and interdisciplinary; that is, we’re including RNs, public health students, dentists, vet med [students]. This is a new world where we all have essential roles to play.” 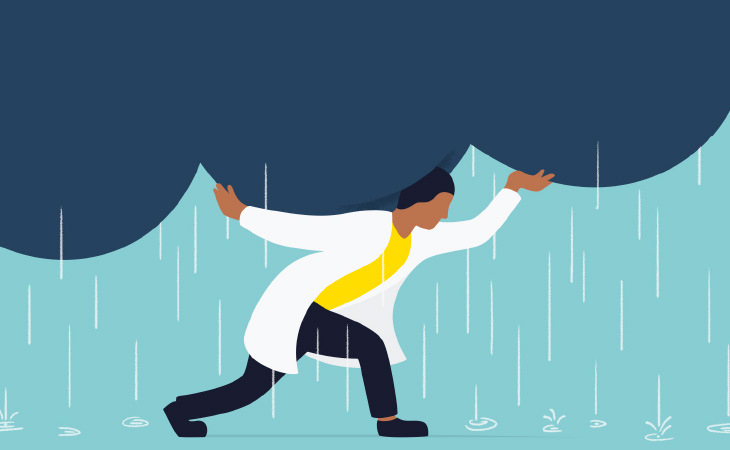 Medical students are more than three times more likely to die by suicide than similarly aged people in the general population.

Kim emphasizes that changing education practices is critical to keeping stress manageable for students. Among the first wave of changes? The Medical School has reduced the amount of educational content for first-year students by 15 to 20 percent, shifted grading to pass/fail, and shortened the academic year by about three weeks.

“We’ve learned the hard way,” says Nelson. “You can’t expect wellness results by sending students to a resiliency class and then follow up by sending them to lectures that include 100 PowerPoint slides when eight would do.”

Nelson reduced the content of her own course on human health and disease by a whopping 50 percent, and the results, she says, have been astonishing. “The students became more engaged, more curious, more respectful, and more appreciative.”

Now, the Medical School holds a monthly faculty development workshop, inviting colleagues from the University’s Center for Education Innovation to help faculty figure out how to reduce content and use evidence-based techniques that encourage active learning, which has been shown to stick better than passive learning.

In addition to new personnel, updated teaching methods, and a revamped curriculum, the Medical School has added a bridging counseling service so students can get immediate help when waiting lists are long for standard counseling and health appointments. Students have been more than receptive: In the first four months, 85 students used the new counseling service.

“It’s important to step out of the intensity of medical school once in a while and remind ourselves that we’re humans who have other interests,” says third-year student Kevin Butcher, who volunteers for both the student-run group CPAP (Confidential Peer Assistance Program) and the peer mentorship program, in which second-year students make themselves available to first-years for questions and support.

It’s important to step out of the intensity of medical school once in a while and remind ourselves that we’re humans who have other interests.

Butcher helps organize CPAP’s Good Acre events at the community teaching kitchen in St. Paul, which usually attract about 20 students for an evening of communal cooking and eating. He has also been a host of the successful new “Coffee with CPAP” initiative, during which second-years meet one-on-one for coffee with first-year students to talk, ideally, about anything but medical school.

Karen Lawson, M.D., who teaches at the Earl E. Bakken Center for Spirituality and Healing, has been organizing a salsa outing for three years; this year, nearly 50 medical students signed up to dance.

“Peer-to-peer support and interaction is so important,” says Slattery, “and to do that within the context of fun really helps mitigate the intensity of medical school. And that’s remarkably healing.”

This fall, the Medical School is testing student learning communities or “houses” (think Harry Potter Hogwarts–style houses) that gather students into more intimate groups to facilitate easier interaction with peers, mentors, and advisers. Program leaders hope to roll out the plan fully in 2020.

To address inequities that may affect students who are underrepresented in medicine, he’s also overseeing implementation of reporting systems so administrators hear quickly if someone is being mistreated or marginalized, and working closely with mental health services to support students with disabilities.

Both Slattery and Kim are excited that the new Health Sciences Education Center, scheduled to open in 2020, will include a mental health clinic with telehealth connections to help the U’s health professional students who are studying and training across the state and around the world. 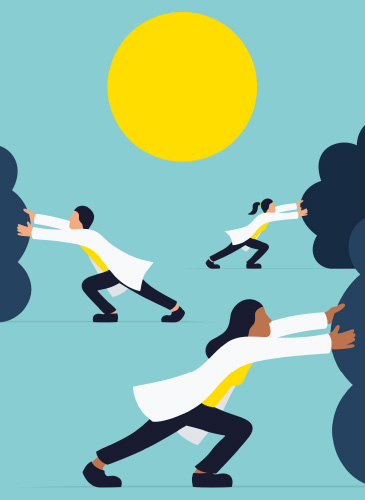 Students who spoke to the Medical Bulletin about their own mental health challenges seemed almost surprised to learn that there was a time when seeking counseling in medical school carried a stigma. Because, on campus, times have changed.

“We’re normalizing the fact that everyone needs help, and encouraging students, ‘Tell your stories,’” says Kim.

Students appreciate that invitation. “I experienced nothing but support from administration, professors, and peers,” says Josh Warneke, a third-year student who suffered academically and emotionally following his divorce and the death of his stepson last year. “I shared my own struggles with some classmates, and I’ve supported a couple others who’ve been through something similar,” he says. “There’s no stigma at all about asking for help. The direction the school is going is absolutely correct.”

Second-year student Kevin Gale agrees; he sought help through the bridging counseling service last year when cognitive overload led to symptoms of depression. “I really can’t say enough good about bridging counseling,” says Gale. “Dr. Slattery and the school made sure we all knew this service was available, and it was incredibly helpful.”

Gale also felt comfortable talking to other students about what he was experiencing. “After I went to bridging counseling, I told several classmates how easy it was — just a matter of going to the counselor’s Google calendar and signing up for an appointment, typically within 24 hours.”

Another third-year student found herself really struggling after she was diagnosed with mononucleosis. Weighed down with fatigue, she fell behind on classwork and ultimately got help from Slattery and bridging counseling, but also from friends and from classmates she barely knew.

“The community here is so supportive of one another, and so open — more so than a lot of other places I’ve heard about,” she says. "That’s one of the reasons I’m here.”

Hold each other up

Peer-to-peer support and interaction is so important, and to do that within the context of fun really helps mitigate the intensity of medical school. And that’s remarkably healing.

Kim agrees. “Our students are phenomenal,” he says. “They’re highly accomplished by the time they arrive here. But medical school can be isolating, and managing that stress is tough.”

For Gibbs, the family emergency that threatened to derail him last year was just a small part of the history he brought with him to medical school.

“Being a black man navigating society, growing up in poverty and witnessing domestic violence, fighting not to reinforce stereotypes, wanting to show that you’re capable and smart — dealing with all of that, as well as crippling anxiety, on top of your academics is really difficult. And it’s not just me. Other classmates have stories to tell.”

What stuck with Gibbs was the fact that, when he sought help, Slattery welcomed him in immediately and guided Gibbs to the counseling and therapy that he says helped save his medical career. When he finally decided to open up about his family situation and mental health issues to a classmate, the two developed a close friendship, encouraging and supporting one another.