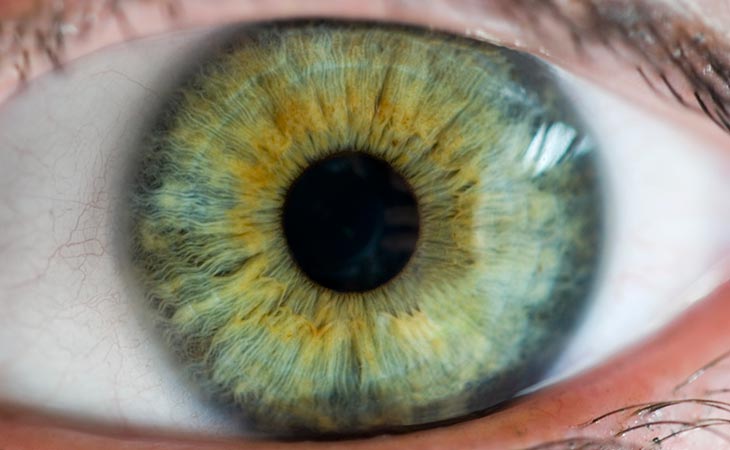 A window on diagnosis and healing

What the eyes can tell us about our well-being

As poets and others have observed, the eye is the window of the soul. But for a long time, medicine has also known that our eyes — with 2 million working parts, they rank only behind the brain in terms of complexity — provide more than an aperture into our spiritual state of being.

They are also a window that allows doctors and researchers to peer into the state of our physical and mental well-being. Today, researchers and clinicians at the University of Minnesota are rapidly expanding the scope of disorders that can be diagnosed by examining a patient’s eyes — and in some cases, using that information yielded by the eye as a starting point for uncovering treatments for ailments that affect both body and mind.

“What kinds of diagnoses can be made through the eye?” asks Erik van Kuijk, M.D., Ph.D., who leads the University’s Department of Ophthalmology and Visual Neurosciences. “In addition to diseases of the eye itself, we can discover signs of high blood pressure, infectious diseases like TB and HIV, and lupus, among others. We can diagnose atrial fibrillation, rheumatoid arthritis, and sometimes diabetes.”

The list goes on — and keeps growing. “Syphilis, MS, brain tumors, Lyme disease, some cancers and genetic disorders,” says Michael S. Lee, M.D., a professor in the departments of Ophthalmology and Visual Neurosciences, Neurology, and Neurosurgery and holder of the Mackall-Scheie Research Chair in Ophthalmology.

“All can be diagnosed through the eye, sometimes definitively; in other cases, as part of a battery of clues pointing toward a disorder,” adds Lee, whose own practice spans work in the clinic and the research lab from thyroid problems to schizophrenia.

The eyes have it

Of all the disorders that manifest themselves in the eyes, perhaps the most familiar are those associated with dysfunctions of the thyroid gland. 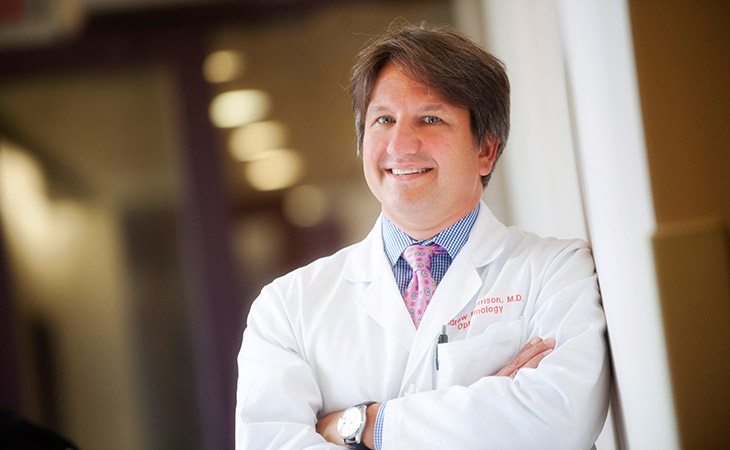 “The explanation we usually give our patients is that thyroid disease is to the immune system like a match that lights fires in both the thyroid gland and in the eye,” explains Andrew Harrison, M.D., who specializes in ophthalmic plastic and reconstructive surgery and codirects the University’s Center for Thyroid Eye Disease with Lee and Erick Bothun, M.D. “The thyroid portion is treated by endocrinologists, while we work with the eyes. It’s a strong interdisciplinary team.”

Another common symptom is a bulging of the eye. “These are often seen together and, when they are, it’s almost always caused by thyroid disease. Many thyroid patients also experience inflammation of the eye muscles that causes the eye to turn in or down,” he says.

“Nobody knows for sure why thyroid conditions do this,” Harrison continues. “It probably results from the immune system detecting antigens on the eye as a result of an autoimmune disease.”

The expanding list of disorders, both physical and mental, that can be diagnosed by means of the eye has led to a growing acknowledgment of the value of linking clinical ophthalmology with interdisciplinary research.

In his area of practice, the most worrisome symptom is droopy eyelids. Only careful diagnosis can determine whether the condition is benign — the result of aging or a birth defect — or the result of far more serious conditions, like a tumor or an aneurysm. “A patient with a droopy eye and a fixed and expanded pupil is often suffering from an expanding brain aneurysm,” Harrison says. “The good news is that a timely diagnosis can lead to lifesaving preventive surgery.”

Bringing blindness into the light

One of the majorcomplications of diabetes is diabetic retinopathy, which causes a host of symptoms, ranging from blurred vision to total blindness. 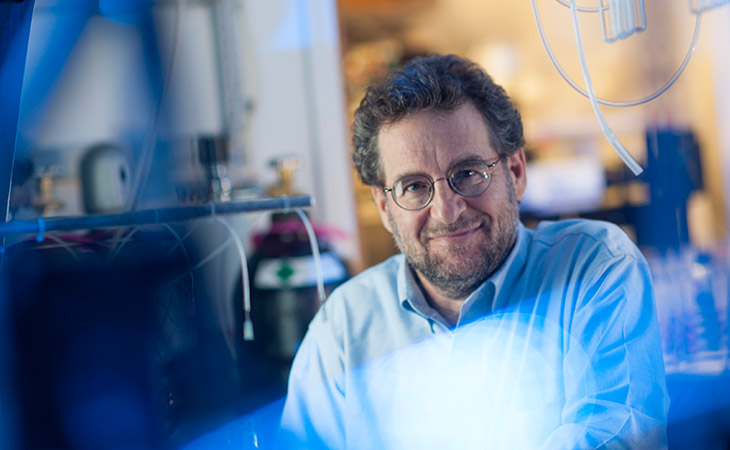 “People who have had diabetes a long time have a good chance of suffering from diabetic retinopathy — about an 80 percent chance after 20 years of diabetes,” says scientist Eric Newman, Ph.D., a Distinguished McKnight University Professor in the Department of Neuroscience.

With funding from, among other sources, a 2013 Innovative Ophthalmic Research Award from the Research to Prevent Blindness Foundation and a grant from Fondation Leducq of France, Newman leads a team of researchers in the search for neurological causes of retinopathy and for treatments that may prevent eye damage.

Doctors have long known the proximate cause of diabetic retinopathy: as with all components of the central nervous system, the retina needs a large supply of blood to function properly. As diabetes causes capillaries throughout the body to deteriorate, blood flow to the retina is reduced. Further complicating matters is the likelihood that new blood vessels begin to develop in the eye in response to the shutdown of capillaries. These blood vessels cause pressure on the already stressed retina, leading to further damage.

Research has revealed that the breakdown of capillaries and formation of new blood vessels happen late in the game. “In a diabetic patient, you find that the dilation of blood vessels in response to light is reduced by as much as 60 percent well before any morphological change in the retina occurs,” Newman explains.

Meanwhile, changes in what are called glial cells in the retina can be detected long before the onset of full-blown retinopathy. Glial cells surround and protect neurons. Once it was believed that these cells had only a passive, support function role, but now researchers, including Newman, have discovered that glial cells are key players in controlling blood flow and also can release chemicals that affect neuronal activity.

Newman recently received a grant from the organization Research to Prevent Blindness to repeat experiments with diabetic patients that he conducted with diabetic rats treated with a readily available chemical supplement that stimulated the activity of glial cells — and it slowed the progress of retinopathy.

“In our animal experiments, injecting this chemical into the bloodstream can restore normal blood flow in 15 minutes,” he says. “We believe that the same thing will happen in diabetic patients when this chemical is administered orally.”

As research by Newman’s team moves into studies involving humans, there are serious hurdles to overcome; for example, the supplement can be harmful to humans in high doses, so Newman will look into the possibility of topical applications and will experiment with related substances that might have the same ameliorative effects but without the toxicity.

Despite those hurdles, Newman foresees the possibility of an exciting breakthrough for the millions of diabetics in the United States and beyond. “This could potentially be a very cheap way to prevent blindness in diabetics,” he says.

In the 1970s, when angel dust emerged as a popular drug among the disco crowd, emergency departments around the country began reporting that patients were being rushed from the dance floor to the ED exhibiting symptoms identical to those found among people who have schizophrenia — visual and auditory hallucinations, experiences of profound dissociation, disordered thinking, bouts of paranoia, and others.

Researchers soon discovered that angel dust interfered with the functioning of a receptor called NMDA, found in the nervous system. Later, research would find that NMDA receptor dysfunction is implicated in schizophrenia. 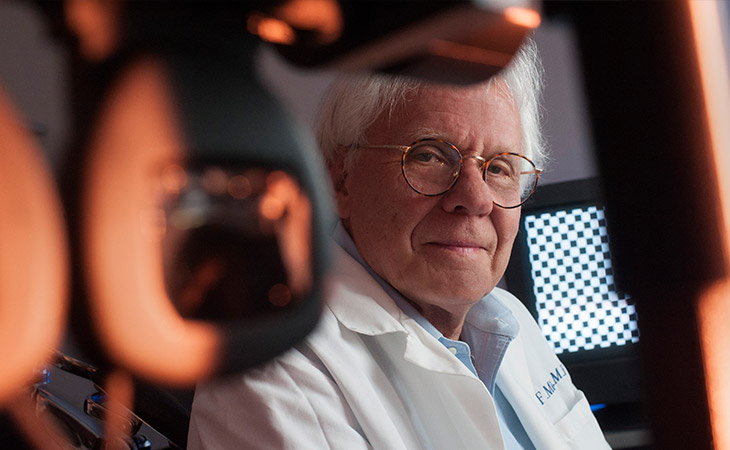 This connection has led University neuroscientist Robert F. Miller, M.D., holder of the 3M Bert Cross Chair in Visual Neuroscience, to look for ways to identify people who might develop schizophrenia by examining the ganglion cells of the retina using an enhanced form of a 10-minute eye test called a pattern ERG. By having patients stare at a brightly lit checkerboard pattern of shifting dark and light squares, it’s possible to stimulate the ganglion cells — and determine, by their response, whether NMDA sites located on those cells are compromised, Miller says.

Newly funded with a $400,000 grant from the National Institute of Mental Health, Miller and colleagues Lee and C. Gail Summers, M.D., along with Department of Psychology assistant professor Angus McDonald III, Ph.D., are working with people suffering from schizophrenia as well as a group of unaffected subjects. Each person in the study undergoes an eye exam that includes a pattern ERG.

“The study isn’t complete yet, but it appears that we are beginning to see considerable differences [in responses to the pattern ERG] between schizophrenics and matched control subjects,” Miller says.

While his work won’t cure schizophrenia, Miller believes it’s possible that, by detecting NMDA receptor dysfunctions early enough, before the symptoms of the full-blown disorder surface, it might be possible to prevent its onset or reduce the severity of the disease by preventing or reducing the neurological damage in people who have schizophrenia. That damage, Miller says, is probably the source of the disorder’s symptoms.

“If we can show that our observations are very predictive, then we can move on to test people who we know are at risk genetically, for example, the identical twin of a patient suffering with the disease,” he says. “Assuming the disorder is caused by NMDA receptor dysfunction, we could treat those at-risk patients and perhaps overcome the deficiency before it is too late. By the time people show symptoms of schizophrenia, in late adolescence or early adulthood, it is too late to reverse the brain damage, which probably sets in progressively during childhood and early adolescence.”

Eve of a revolution

The expanding list of disorders, both physical and mental, that can be diagnosed in whole or in part by means of the eye has led to a growing acknowledgment of the value of linking clinical ophthalmology with interdisciplinary research. 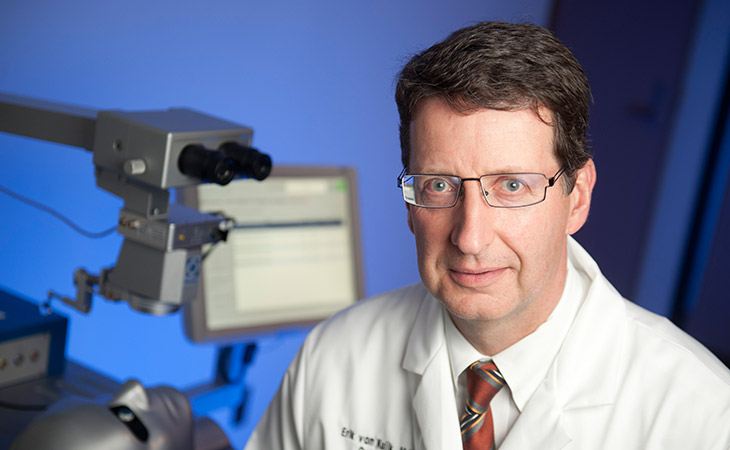 “In our department, ophthalmology, we were treating eye diseases and doing research on the pathogenesis of eye disorders, while in the neuro-science department, they were looking specifically at the mechanism of disease,” observes van Kuijk. “We thought it was important to begin talking to one another and pursue more active collaboration between the two fields — to combine ‘benchtop to bedside’ research and applied clinical care in one department.”

This kind of collaboration, van Kuijk believes, has put the field on “the eve of a revolution” in advanced diagnosis and treatment of a host of disorders.

“But we will only succeed through interdisciplinary collaboration,” he says. “Not by ophthalmologists working alone.”

For retired ophthalmologist William Conrad, ’61 M.D., it was an unforgettable moment.