To her neurosurgeon, Clark C. Chen, MD, PhD, Kristin Peterson is a force of nature. A Golden Valley resident, “she has a brilliant mind that never seems to rest,” said Chen. “She is a full-time elementary school psychologist whose insights are highly respected. She runs marathons. She coordinates and participates in all kinds of extracurricular activities with her sons. She is the kind of person who seems to expand a 24-hour day into 48.”

So, when Kristin’s energy sagged and she became confused from time to time, her husband, Craig Helmstetter, became concerned. “She wasn’t sleeping well,” he said. “We thought she was dehydrated or had pneumonia.” Craig took Kristin to a local hospital where she had a CT scan of her brain. “They saw something and weren’t sure what it was, so they did an MRI the next morning,” he said.

A tough diagnosis
The MRI showed what appeared to be a cancerous mass in Kristin’s brain. It would later be confirmed as glioblastoma – the most aggressive kind of brain cancer – and the most common in adults. “At that point, we wondered if we were in the best place for Kristin’s care,” Craig said. “My sister-in-law suggested we go to the University of Minnesota, as it was a leading center for treating brain cancer.”

They sought care at the University of Minnesota Medical Center where they met Chen, the Neurosurgery Department’s head. Because of her brain tumor, Kristin doesn’t remember much from the first meeting with him. She would come to know Chen, however, as “communicative, friendly, humble, and a physician who takes lots of time with you.”

When he reviewed Kristin’s images, Chen saw a larger, egg-sized mass accompanied by a smaller tumor. They were at odd angles to one another and appeared to be separated by normal brain tissue.

Because standard imaging did not provide enough information to make this distinction, Chen turned to a new drug approved by the Food and Drug Administration (FDA).

Seeing what cannot be seen
The drug is called 5ALA, short for 5-aminolevulinic acid. It is mixed in water and drunk by patients two to four hours prior to surgery. Brain tumor cells, particularly those of glioblastoma, take up this drug and convert it into a red fluorescent compound. During surgery, the neurosurgeon uses a specialized microscope designed to detect this red fluorescence. 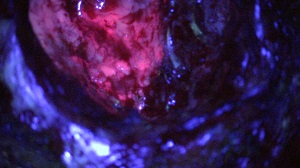 Kristin drank 5ALA prior her surgery. During the resection, that “normal” tissue between the two masses appeared bright red under the specialized microscope, as shown in the image at left. “Seeing the fluorescence, I knew the area between the tumors was infested with cancer cells,” Chen said. “I proceeded with surgical resection until all the fluorescent tissue was removed. The post-operative imaging showed no visible residual tumor. Frankly, I do not think that I could achieve this excellent result without the aid of 5ALA.”

The University of Minnesota Medical Center is the first in the Twin Cities to use this technology, Chen noted. “Removing tissue beyond an obvious tumor increases the risk of injury to the brain,” he said. “Resecting too little of the tumor compromises the patient’s chance of beating it. As neurosurgeons, we must make ‘split second’ surgical decisions that balance between these two extremes. 5ALA provides information that allows me to make those decisions in the best interest of the patient.”

Chen is now using 5ALA in all his brain tumor surgeries.

After the surgery
“I have had no neurologic injury at all … since the surgery, my brain has been moving really quickly,” Kristin said. “There were no negative impacts other than the incision across my head.” Though she was able to return to family activities almost immediately – even completing five miles of cross-country skiing – the required chemotherapy and radiation has been a challenge.

As she makes her way through that process, Kristin’s recovery has been aided by several things, including support from family and friends and Chen’s responsiveness. “Even after getting out of the hospital, he stayed connected,” she said. “He called me at 10:30 at night on a Sunday to answer some questions. To me, that’s going above and beyond as a doctor.

“Dr. Chen said to me in the hospital … ‘you have so many of the characteristics of the kind of person who beats the odds,’” Kristin continued. “I don’t like it when people tell me, ‘When your tumor regrows… .’ Oh, no, no, no. Don’t say that to me … I know that some patients are surviving 10 years after surgery. I want to be that person.”

There are philosophical underpinnings that inspire Chen’s approach to his patients and his vision for his department. “The same curiosity and wonder that led the first human who looked up to the stars and wondered what lies beyond fuels the yearning to see things smaller than the perception of the naked eye,” he explained. “The culmination  of that curiosity has now fundamentally changed Kristin’s life. The mission of the University of Minnesota Department of Neurosurgery is to continue to foster the curiosity that drive such discoveries – so that every brain tumor patient can ‘be that person.’”