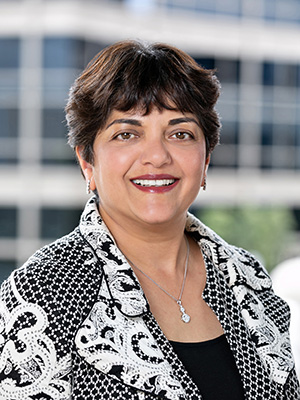 Amita Joshi, Ph.D., is an Executive Leader with more than 25 years of experience in Clinical Drug Development and Clinical Pharmacology.  In her role as Vice President and Head of Clinical Pharmacology at Genentech, Amita is responsible for the strategic and scientific direction of Clinical Pharmacology and Pharmacometric aspects of all Genentech programs from Early Clinical Research through post-approval. The scientific staff of Clinical Pharmacology is responsible for ensuring that they identify and deliver the right dose, by the right route and by the right regimen to patients.  In her role, Amita has overseen successful development strategies and tactics for first product approvals and/or product extensions for Small molecules, Monoclonal Antibodies, and Antibody Drug Conjugates.   These include Polivy, Cotellic, Tecentriq, Kadcyla, Lucentis, Rituxan, Erivedge, Perjeta, Herceptin, Avastin, Xolair, and Nutropin.  Amita has published more than 40 manuscripts and book chapters and presented at national and international conferences.

Amita is also recognized by her peers in the Biotech industry for her contributions in understanding the Clinical Pharmacology of therapeutic monoclonal antibodies, has been a member of the AAPS and ASCPT scientific leadership and has chaired AAPS’s National Biotechnology Conference in 2010.  Amita received the Professional Businesswoman “Industry Leader Award” in 2015, the San Francisco Business Times “100 Most Influential Women in Business Award” in 2016.  Most recently Amita received the “Malle Jurima–Romet Mid-Career Leadership Award” from ASCPT in 2018 which spotlights scientists who exemplify professional growth through continued leadership, research excellence, and a commitment to the future of clinical pharmacology and translational medicine.