"Discoveries in the African Ancestry Genome: Precision Medicine for All" 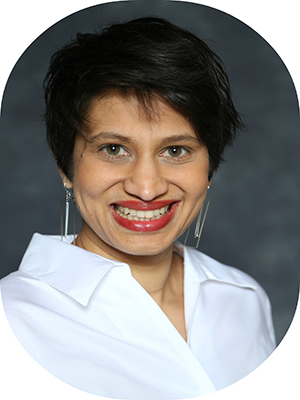 In addition to earning dual doctoral degrees, Dr. Perera was trained as a fellow in Clinical Pharmacology and Pharmacogenomics at the University of Chicago.  During her two-year clinical fellowship, she trained within the human genetics’ laboratory of Dr. Anna Di Rienzo, studying novel variants related to pharmacokinetic differences in CYP3A4 in African Americans.  This training highlighted the complexities of genetic studies in admixed populations, such as African Americans, and integrated my clinical and basic science backgrounds, making her ideally suited for translational work in pharmacogenomics. Dr. Perera has been funded by both the NHLBI and American Heart Association to investigate novel genetic variant associated with warfarin dose response.  This work led to the discovery of a genetic variant that was highly predictive of warfarin-associated bleeding in African Americans. She has expanded this initial focus from warfarin to drug metabolism and its role in pharmacogenomics thorough an R01 with the NIMHD to investigate genetic variation in drug metabolizing enzymes in African Americans.  This work spans all pharmacologic areas and has allow for a more in-depth understanding of how these important genes are regulated.  She received the Diversity Award from the University of Chicago in recognition to her leadership in promoting diversity in science thorough mentorship of underrepresented minority trainees.  She was also the 2016 Leon Goldberg Young Investigator Award recipient from the American Society of Clinical Pharmacology and Therapeutics for her ongoing scientific work in African American pharmacogenomics.  She is currently the PI for one of five Transdisciplinary Collaborative Centers funded through the NIMHD.  Dubbed ACCOuNT (African American pharmacogenomic Cardiovascular CONsorTium), her team of collaborators work to accelerate the discovery and translation of pharmacogenomic findings in African-ancestry populations.  She has published extensively in the area of African American genomics, with her most recent publications in the Journal of the American Medical Association and PLOS Genetics.