According to the Kaiser Family Foundation, while sexual and gender minorities have many of the same health concerns as the general population, they experience certain health challenges at higher rates, and face several unique health challenges. Third-year post-doctoral researcher in the Department of Psychiatry and Behavioral Sciences, Melissa Simone, PhD, agrees. As a queer woman, she is interested in understanding those differences, especially when it comes to her primary research focus area – eating disorders. 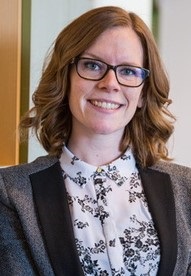 Simone (pictured at left) has led several studies whose goals included examining associations between gender identity, sexual orientation, and eating outcomes, and identifying those whose rates of eating disorder diagnosis and related impairment is greatest. One such study mined data collected over several years (2015 to 2018) from almost 14,000 college students throughout Minnesota as part of the Boynton College Student Health Survey.

No surprises
What Simone and her team found didn’t surprise them.

“Rates of anorexia nervosa, bulimia nervosa, depression and different types of academic impairment were highest in sexual and gender minority populations,” she said. “Transgender students, regardless of sexual orientation, and bisexual cisgender women [those who have the same sexual identity relative to their sex assigned at birth] experienced the highest rates of eating disorders and eating disorder-specific academic impairment relative to any other LGBTQ+ students.”

Simone and colleagues pulled data from another study and highlighted those findings in a paper titled, Disparities in eating disorder risk and diagnosis among sexual minority college students: Findings from the national Healthy Minds Study, published May 25, 2020, in the International Journal of Eating Disorders. Some of their findings included:

Eating disorders not equally distributed
The data shows that while this population does have higher risk for getting an eating disorder, it’s not distributed equally among all groups. “Transgender, bisexual and questioning folks tend to be at greater risk,” noted Simone.

Why are LGBTQ students at greater risk for eating disorders and accompanying eating disorder-related academic impairment? “They experience discrimination about their sexual orientation, which negatively impacts health, and when paired with other forms of discrimination, such as weight discrimination, the effects can be magnified,” Simone explained. Weight discrimination, according to the data, reflects whatever the student perceives it to be. “It could be someone calling them fat or making indirect comments such as, ‘You’re so brave for wearing that shirt.’”

“We also ask questions about social capital, such as how many friends they have, how many friends they feel safe talking about things with, and about family support – both as a person and as someone with a different sexual identity,” Simone added. “It will help us gain a better understanding of what’s going on with this population and how best to intervene.”

Ensuring tools are valid
One of the themes of the mixed-methods study, according to Simone, is to validate existing eating disorder measures within the LGBTQ population to determine whether they are measuring what the researchers think they are. “We have a duty to question these tools,” said Simone. “A lot of what we use was created decades ago. If we have poor measurement, we’re likely going to miss a lot of people in a population that’s already experiencing significant disparities. If we were to measure against the true experience of the LGBTQ population, imagine what we would find.”

Biggest takeaway
For Simone, the biggest takeaway from this research – so far – is that eating disorders are often sold to society as a wealthy white woman’s problem. “That’s just not the case but when we have that bias, our treatments target that population,” she said. “We want to demonstrate that other types of people have eating disorders and the way to reach them may be different than what we’ve done in the past. We want to create a more targeted intervention and prevention program for LGBTQ populations and their unique experience with discrimination and in the social environment. The goal is to reduce bias and help people realize that they may have an eating disorder.”