Teenager with hydrocephalus takes it in stride

Although no one knew it at the time, Pete Bigalk of Prior Lake, MN, was born with a condition known as craniosynostosis, which prevents the skull from widening. The diagnosis was made when Pete was three months old. His parents, Jean and Kurt, brought him to the U’s Neurosurgery Department to see pediatric neurosurgeon Stephen Haines, MD. In October of 2007, Dr. Haines surgically separated the fused bones in Pete’s skull to allow his head shape to normalize.

But the craniosynostosis was hiding something else.

Hydrocephalus discovered
After his surgery, it was discovered that Pete had hydrocephalus, a build-up of cerebrospinal fluid deep within the brain. “He’d had an intraventricular hemorrhage, which predisposes you to getting hydrocephalus, so we were watching for it,” said Dr. Haines.

In Pete’s case, the fluid had no place to go. The current treatment for the condition is to place shunts in the ventricles of the brain – a set of four interconnected cavities – that enable the fluid to be drained into and absorbed by a different part of the body. If the fluid isn’t removed, it can cause problems such as seizures and brain damage. In some cases, it can be fatal.

Pete had his first shunt system surgically emplaced by Dr. Haines in December of 2007. It would take a couple of surgeries before the system stabilized and began to pull the fluid away from the ventricles of his brain.

Mature approach
Now 13 years old and the veteran of four brain surgeries, Pete takes an unusually mature approach to having hydrocephalus. “I was born with it, so I don’t know life without it,” he said. “It doesn’t affect my day-to-day life, but I have to take it into consideration when it comes to sports. I play basketball, tennis and golf, but no contact sports like football or hockey. Mostly, hydrocephalus has created opportunities in my life – opportunities to educate others about it and to help others living with it.”

Helping others comes naturally to Pete. He often connects with kids who have hydrocephalus and it’s not just the kids who benefit. “Parents see Pete and think that hydrocephalus may be more manageable than they thought,” said Jean.

As the parent of a child with hydrocephalus, Jean spent the first seven years of Pete’s life worrying about him. “I worried about his shunts failing and him needing another brain surgery,” she said. “No matter how good your neurosurgeons are – and we are so lucky to have Dr. Haines and the U of M – it’s scary knowing that you’re handing your child over and they’re going into his brain.” 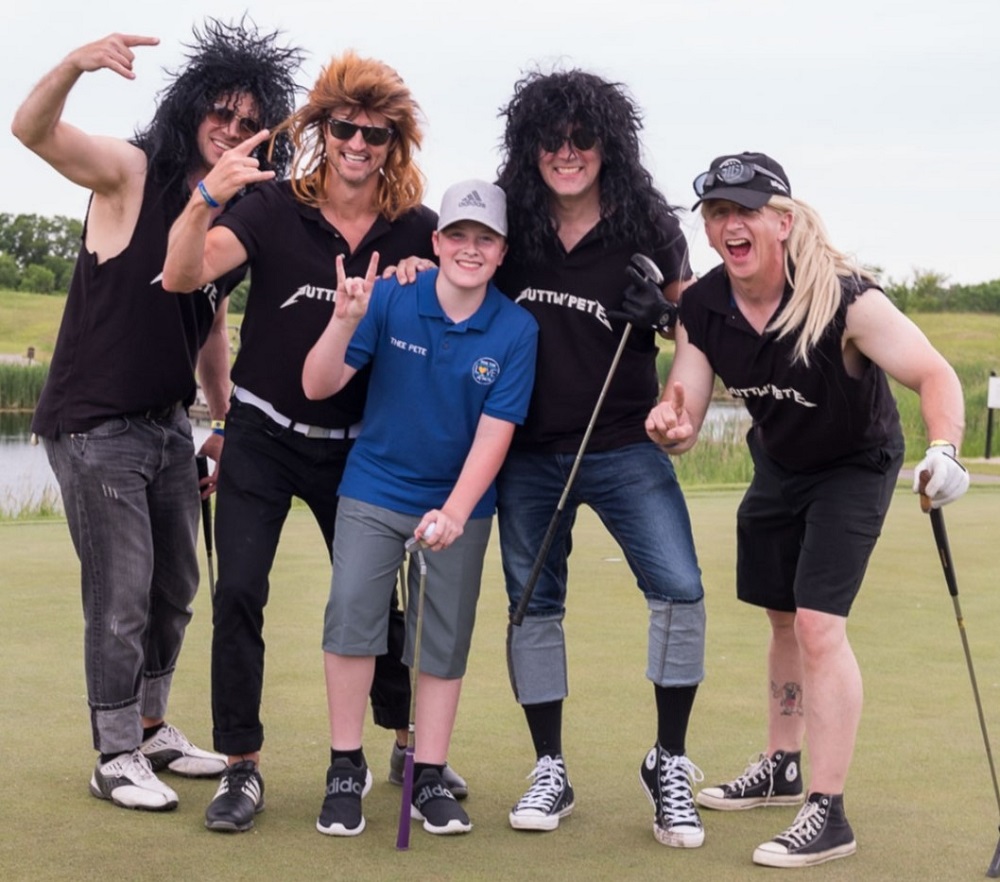 Focus on research dollars
For the last six years, however, Pete (pictured at left with some "rock star" golfers) and his family have turned the energy they spent worrying about him into educating people about hydrocephalus and raising funds for University of Minnesota research into the condition. A golf tournament seemed a natural way to raise the money. “I started golfing when I was three years old,” Pete said.

Thus, the Putt with Pete Charity Golf Event was born in 2015. The outing is billed as serious fun. “We want everyone who comes to have a blast,” said Jean. “But it’s also serious because we want everyone to know that a million people of all ages in this country have hydrocephalus. Our goal is to donate research dollars for this condition that affects so many people.”

Putting the funds to good use
According to Daniel Guillaume, MD, MS, Chief of Pediatric Neurosurgery for U of M Masonic Children’s Hospital in Minneapolis, MN, the money raised by Putt with Pete has been used in the past to purchase access to a large national database. “We looked at the associations of different types of hydrocephalus in patients with various types of brain tumors,” he said. “We are currently submitting a proposal to the U of M to study the effect on hearing loss of a ventriculoperitoneal shunt placed for hydrocephalus. We hope to use Putt for Pete funds to do part of this work.”

At the same time, the Neurosurgery Department is submitting a request to the National Institutes of Health for about $2 million to extend that study to multiple sites (with the U leading the effort). “My colleague here at Masonic Children's, Dr. Carolina Sandoval and I, and Dr. Cornelius Lam, who is at the Veterans Medical Center in Minneapolis, have other hydrocephalus research, both in the laboratory and with our patients. Continued funding from Putt for Pete will also allow us do this work,” Dr. Guillaume added.

Pete’s advice
What advice would Pete give others who have hydrocephalus? “Everyone has something that makes them different and unique,” he said. “Hydrocephalus is one of those things.”

“This is a problem that can be managed,” added Dr. Haines. “It shouldn’t take over your life and keep you from doing normal things. A child with shunts who doesn’t have other issues should do well. Pete is a good example of that.”

Although this year’s Putt with Pete had to be cancelled because of the COVID pandemic, you can still donate. More information: https://www.puttwithpete.com/donate-usdusd