Our team conducts both qualitative and quantitative research on a wide variety of social factors and how they are associated with the well-being of adolescents and young adults, with particular attention to vulnerable groups such as lesbian, gay, bisexual, transgender and queer/questioning (LGBTQ) youth, those with disabilities, and those who are overweight. Social factors include characteristics of the family and peer group (e.g. bullying experience); school resources, climate, and characteristics (e.g. presence of a gender/sexuality student organization); and features of the neighborhood or community (e.g. political climate, public policy). We capitalize on existing youth surveillance data to create multilevel quantitative datasets for hierarchical analysis. Qualitative methods with youth, parents, and professionals include interviews, focus groups, and other novel techniques.

Background: Bias-based bullying, or bullying based on personal characteristics such as race/ethnicity, sexual orientation, gender identity, or body weight, has been identified as a key contributor to health disparities among youth of color; lesbian, gay, bisexual, transgender, and queer/questioning (LGBTQ) youth; and youth who are overweight or obese. Students who are the targets of bias-based bullying may not only experience emotional distress and physical health consequences associated with this type of bullying victimization, but they may also be less academically engaged and more likely to skip classes or full school days. As a result, bias-based bullying during adolescence can have life-long impacts on children’s healthy development, including physical health, social and emotional well-being, academic achievement, and employment. Although well-placed to intervene, educate, and prevent bias-based bullying, schools are struggling with a lack of clear guidelines and evidence-based practices that effectively reduce bias-based bullying. Given schools’ limited time and monetary resources, specific school practices that are responsive to the needs of both schools and youth most affected by bias-based bullying are critically needed.

This study: This study had two parts – a qualitative and a quantitative component.

Qualitative research: The aim of this component was to describe bias-based bullying experiences from the perspectives of youth, parents, and school personnel in Minnesota, focusing on youth of color, LGBTQ youth, and those who are overweight. We conducted 13 dyadic interviews (n=26 youth and parents), four focus groups (n=24 youth), and 7 school team interviews (n=19 staff members). Key findings include the following:

Quantitative research: The aim of this component was to explore whether schools that offer diversity education activities have lower rates of bias-based bullying among students compared to schools that do not offer these activities. Data came from two sources: the 2018 CDC School Profiles Survey (N=216 schools) and the 2019 Minnesota Student Survey (N=64,510 students). Multilevel logistic regression tested associations between diversity education activities (diversity clubs, lessons, or special events) and eight types of bias-based bullying among students (e.g. based on race/ethnicity/national origin, sexual orientation), with attention to differences across relevant demographic characteristics. Key findings include:

Sharing findings: A brief summary of this work is available here (factsheet). Please contact Dr. Eisenberg (eisen012@umn.edu) if you are interested in having a team member present findings to school personnel in your organization.

+
Protection at the Intersections for Queer Teens of Color (PIQ-TOC)

Lesbian, gay, bisexual, transgender, and queer/questioning (LGBTQ) adolescents are at disproportionate risk of poor health behaviors, experiences and outcomes compared to their straight, cisgender peers. LGBTQ youth, however, are not a homogenous population; each has multiple social identities that affect the risk and protection they experience. Intersectionality refers to ways in which power and privilege are structured based on interrelated social positions (e.g. due to race/ethnicity, immigrant status, native language) and how individual experiences reflect processes that confer privilege and disadvantage. Mutually constitutive forms of social oppression (e.g., stigma simultaneously based on race/ethnicity, gender, and sexual orientation) may differentially affect the health of LGBTQ people with multiple marginalized social positions. Living within these intersecting social positions may give rise to unique challenges as well as strengths that promote healthy development among youth.

The landmark 2011 National Academy of Medicine (NAM) report on the health of LGBTQ populations and additional recent reports have highlighted the need for health research using an intersectionality framework, explicitly including both risk and resilience, to inform interventions supporting LGBTQ youth. Building on the nascent literature suggesting that Latino and Black/African American LGBTQ youth might be at heightened risk, the proposed study responds to NOT-MD-19-001 and addresses the following research question regarding LGBTQ adolescents (12-19 years old): 1) What are differences in bullying, risk behaviors, emotional distress, and protective factors among youth with different social positions (i.e. racial/ethnic groups, immigrant experiences, and native language)? 2) How do differences in protective factors and other characteristics explain differences in these outcomes among youth with different social positions? and 3) What positive and negative experiences are particularly relevant to the overlapping, simultaneous production of inequalities by LGBTQ identity, race/ethnicity, immigration experiences, and native language? We will answer these questions with two study aims: First, conduct extensive analysis of three existing adolescent health datasets: the Minnesota Student Survey (N~122,000), California Healthy Kids Survey (N~1,042,000), and the LGBTQ National Teen Survey (N~17,000), which have different samples, demographic profiles, and measures. We will test multiple hypotheses using both harmonized and parallel analyses. Second, conduct qualitative interviews with 64-80 LGBTQ youth from different social positions to more deeply understand quantitative findings and generate concrete, relevant recommendations for interventions. We will focus on up to four intersecting social positions where LGBTQ youth face the greatest disparities, as identified in Aim A, and specific protective factors identified in Aim A will be the focus of interviews to “dig deep” beyond brief survey measures. Qualitative findings will provide critical information on interpersonal and community assets for the most vulnerable LGBTQ youth and how they can be bolstered for other young people.

The goal of this study is to broaden and deepen our understanding of the family, peer, school and community environments that protect young LGB people from involvement in high risk health behaviors, including substance use, HIV risk behaviors and suicide behaviors.  This research aims to 1) develop a theoretically grounded approach to promoting health among LGB adolescents based on in-depth knowledge of their community and school environments, and 2) link environmental data, collected using the Inventory, with existing population-based student data to identify factors at the individual, family, peer, school and community levels that protect LGB youth from involvement in health risk behaviors. “Go-along” interviews with 72 youth in diverse locations will be used to elicit in-depth information on LGB adolescents’ perceptions of supportive elements in their schools and communities; this information, in conjunction with published literature, expert review, and psychometric testing, will be used to create an LGB Environment Inventory to characterize policies, programs, resources and other supports for LGB youth that exist in these settings.  The Inventory will then be used to measure indicators of support in 120 communities in Minnesota, British Columbia and Massachusetts, using publicly available materials (e.g. websites) and brief contacts with key informants (Aim 1). These community-level data will then be linked with existing student survey data from approximately 3,600 LGB adolescents in these same communities, which will include information about family, peer and individual supports, as well as health behaviors and demographic information (Aim 2). The following hypotheses will be tested: a) higher LGB environment scores for the community and school will be protective against health risk behaviors among LGB youth; b) greater family connectedness and support and a more supportive peer environment will be protective against health risk behaviors among LGB youth, and c) family, peer and individual-level factors will moderate the associations between the LGB environment (community and school) and the health risk behaviors of interest.

This research includes extensive analysis of a large, population-based sample of gender diverse youth (N=2168), takes a broad view of health influences and health care, and pairs this information with qualitative data from adolescent health care providers and youth.  The goal of this mixed-methods study is to understand the health needs of gender diverse youth in order to develop and test training modules to be used in medical and nursing education in a future R01 application. The study has two specific aims: 1) Analyze data from the Minnesota Student Survey (MSS), a statewide surveillance system of adolescents’ health and related behaviors, which has recently been revised to include three measures regarding gender (biological sex, transgender identity, gender presentation).  Analyses will focus on high risk health behaviors (i.e. substance use, sex behaviors, suicide involvement, bullying and prejudiced-based victimization), protective factors (i.e. internal assets, family support, school connection), health and health care utilization of gender variant youth, with comparisons to straight cisgender youth and youth who are diverse and lesbian, gay, bisexual and questioning (LGBQ, with whom transgender youth are often grouped for services and resources).  2) Conduct interviews with health care providers working with adolescents and with gender diverse youth to understand health care practices and needs of this population.  Interviews with health care providers will include questions about their professional training regarding gender diverse youth, need for resources, and comfort and competence with this topic. Interviews with gender diverse youth will include questions regarding their experiences with health care professionals, information they would share with providers about their health needs, and feedback on findings from health care provider interviews.

DoGPAH is home to Interdisciplinary Fellowship Programs that bring together a cadre of learners who lend their disciplinary perspective to the intensive shared fellowship experience. Several funding sources support the programs and also provide a range of fellowship focus options. 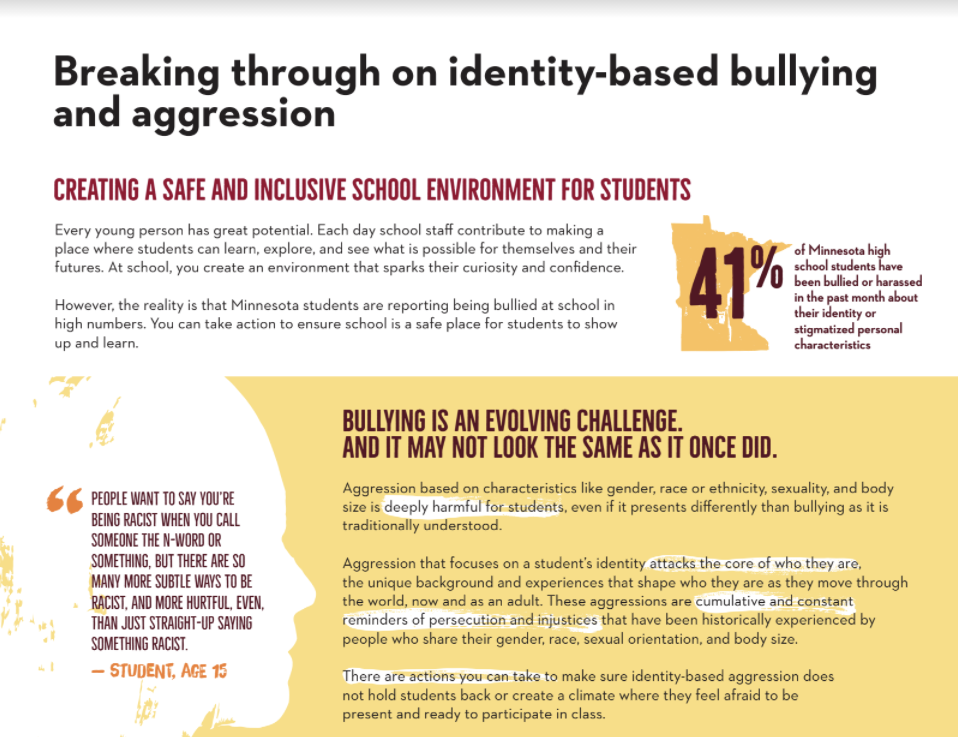 CREATING A SAFE AND INCLUSIVE SCHOOL ENVIRONMENT FOR STUDENTS

Every young person has great potential. Each day school staff contribute to making a place where students can learn, explore, and see what is possible for themselves and their futures. At school, you create an environment that sparks their curiosity and confidence. However, the reality is that Minnesota students are reporting being bullied at school in high numbers. You can take action to ensure school is a safe place for students to show up and learn. 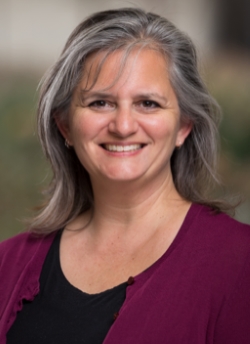