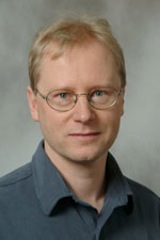 Dr. Farrar holds the Virginia and David Utz Land Grant Chair in Fundamental Immunology, is a member of the Division of Molecular Pathology and Genomics, and is a member of the Center for Immunology.  His research is focused in three broad areas: B-cell development in the bone marrow and B-cell acute lymphoblastic leukemia (ALL), the developmental pathway of T regulatory cells, and cancer immunotherapy.

Farrar and his colleagues made a transgenic mouse that expresses a weakly constitutively active form of a transcription factor called STAT5b in B cells and T cells. During B-cell development in these mice they observed an expansion of B-cell progenitors. Some of these mice would develop B-cell ALL. Farrar and a colleague who studies the B-cell adapter protein BLNK that links the pre-B cell receptor to downstream signaling cascades found that nearly all transgenic mice with weakly expressed STAT5b and lacking BLNK developed B-cell ALL. The combination of crossbreeding experiments with transgenic STAT5b mice and the Sleeping Beauty transposon mutagenesis system enabled Farrar’s team to identify through crossing studies a number of key genes downstream of BLNK (BTK, protein kinase C beta, NF-?B) that cooperate with STAT5b. Key among these downstream genes is the zinc finger transcription factor Ikaros, a regulator of the earliest stage of B cell development. Farrar and his colleagues found that STAT5b and Ikaros, though separate signaling pathways, bind to the same sets of genes in mice. Subsequent analysis of activation ratios for the STAT5b and Ikaros pathways in human clinical specimens of ALL showed a correlation with patient survival and remission duration following treatment, demonstrating their potential
clinical importance.

Farrar’s STAT5b transgenic mice also show a major expansion of CD4-positive and FoxP3-positive regulatory T cells (Tregs), which provided the basis for a second research thrust. FoxP3 is a major transcription factor for the development of Tregs. In a major study Farrar and two of his colleagues demonstrated that the interleukin 2 (IL-2) receptor signaling specifically through STAT5 was critical for the development of Tregs by binding to the FoxP3 gene. In a follow-up study Farrar working with another collaborator proposed a two-step model for Treg development: a strong signal through the T-cell receptor (TCR) produces Treg progenitors with high expression of cell-surface IL-2 receptors; IL-2 signals then drive the conversion of the Treg progenitors into mature Tregs. The way a progenitor cell knows that its got a strong TCR signal is that it is linked to a series of cell-surface tumor necrosis factor receptor superfamily (TNFRSF) members that prime the cell to be sensitive to IL-2. The tighter the TNFRSF linkage and thus IL-2 sensitivity, the greater the likelihood of the progenitor cell becoming a Treg. Tregs are focused on high-affinity self-antigens like insulin and in that capacity help to prevent autoimmune reactions like diabetes.

A third focus of Farrar’s research, one that bridges the two described above, is cancer immunotherapy. His team is tracking how the immune system responds to tumor antigens in leukemia, specifically ALL with the BCR-ABL fusion gene. With the working hypothesis that the BCR-ABL fusion gene produces a peptide that the immune system does not recognize and could serve as a rejection antigen, Farrar’s laboratory set out to develop a tool to track the immune response to BCR-ABL. In this effort he collaborated with Marc Jenkins in Microbiology who has developed MHC class II tetramers. These tetramers allow tracking of T cells specific for one MHC peptide complex. By tetramerizing the BCR-ABL peptide, they found that there are a small number T cells in mice that can recognize the peptide encoded by the fusion of BCR to ABL.. Injecting leukemia cells into these mice produces a Treg expansion, which serves to suppress any immune response. Farrar and his colleagues are employing a vaccination strategy to see whether it is possible to boost the immune response and prolong survival in mice and ultimately in humans following chemotherapy.