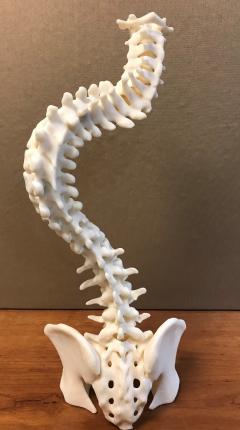 University of Minnesota surgeon David Polly Jr., MD, is working diligently toward comprehensive scoliosis awareness, detection, and treatment in the state of Minnesota. To raise awareness of the condition, which causes a sideways curve in the spine, Polly has been working with the Scoliosis Research Society (SRS) to declare June Scoliosis Awareness Month.

Scoliosis affects roughly 2-3 percent of the population, or 7 million Americans, according to the National Scoliosis Foundation. Scoliosis can develop into a life-limiting condition that requires multidisciplinary care. The proclamation is intended to raise awareness for education, treatment, and research surrounding scoliosis, especially within the school system.

“That’s what we are really looking to increase awareness of, so that if a parent sees that their child’s spine looks funny, that they get it checked,” Polly said.

“We can treat that with bracing to prevent progression, and bracing data is pretty compelling that it’s useful and it works reasonably well. If, however, it continues to progress, once the curve hits about 50 degrees, that’s usually when we recommend surgery.”

Idiopathic scoliosis is the most common form, and often can be spotted during childhood, making it crucial that physicians and parents are aware of the signs. Currently, the state of Minnesota does not have a school screening program to help detect the condition early on. In the past, this type of screening was routine across the country.

“Dr. Stuart Weinstein from Iowa led a trial called the BRIAST trial, and the BRAIST trial was a randomized controlled trial between bracing and no treatment for scoliosis, and it showed that bracing worked,” Polly said.

Originally, The National Scoliosis Foundation spearheaded the proclamation effort and was successful in Massachusetts. The SRS then decided to proceed with the long-term goal of national awareness and advocacy for early detection. According to the SRS, 19 states have officially proclaimed June as Scoliosis Awareness Month in 2018.

“The bigger curves are harder to treat, they are higher risk, there can be more blood loss, and more risk of paralysis; so we think that early detection is a good idea.”

The University of Minnesota Department of Orthopaedic Surgery has a rich history of pioneering scoliosis research, treatment, and education. The U’s John Moe, MD, was instrumental in forming the foundation of spinal deformity treatment. The department carries on this legacy by training and educating competent orthopaedic surgeons who are actively engaged in the community and advocate for patients.