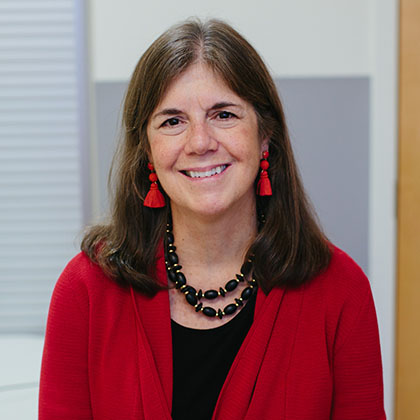 In the medical community, having a research paper cited more than 1,000 times is no small feat. Elizabeth Arendt, MD, professor and vice chair of the Department of Orthopedic Surgery, has accomplished this with her paper “Knee Injury Patterns Among Men and Women in Collegiate Basketball and Soccer,” published in 1995 in The American Journal of Sports Medicine.

Arendt will be honored for her accomplishment with a plaque on the Medical School’s Wall of Scholarship featuring the first page of her article, along with an induction ceremony and reception in conjunction with the Medical School Dean’s Distinguished Research Lectureship on October 25, 2018, at Northrop Auditorium. Of the 39 total recipients of this award, Arendt is one of two who belong to a surgical specialty, and the first from the Department of Orthopedic Surgery.

Arendt served as an orthopedic consultant for the men’s Gopher basketball team after she joined the department’s faculty in 1985, and by 1989, took over as head physician for women’s intercollegiate basketball. During this time, Arendt noticed something peculiar. Despite advances in women’s training and opportunity, they sustained more overall knee injuries than men, and almost three times more anterior cruciate ligament (ACL) injuries.

“It was apparent to me as a team physician for men’s and women’s teams at a single university, that men rarely had an ACL injury,” Arendt explained. “At that time, about one-third of the women’s team had sustained an ACL injury.”

Arendt wondered if injury patterns were a product of the institution or if it was something more pervasive. To answer this question, she turned to the National Collegiate Athletic Association injury surveillance database to look for differences in men’s and women’s sports. Arendt chose to analyze basketball and soccer because they were two sports in the database that are played similarly by men and women, and share similar rules.

“As it turns out, basketball and soccer were the two sports that had the highest injury rates in females playing collegiate sports,” Arendt said.

She first presented her findings at the American College of Sports Medicine meeting in 1993, and at the time Arendt thought the problem would be solved within a couple of years.

“In population-based research, we now accept that many of the questions we ask ourselves can’t be answered by a single institution or database; we really have to have large numbers and that takes cooperation among institutions,” Arendt said. “This project really drilled that home for me.”

By the time Arendt was ready for publication, she had ten additional years of data, and was surprised by the results.

“In the early ‘90s, when we first observed the disparities between men’s and women’s injuries, we thought it was a product of women not having the kind of training that men did,” Arendt explained. “In time, we had ten more years of title IX, of gender equity, of better coaching, and better quality of play. Despite all of these advances, we still had approximately three times the amount of injuries in females versus males in these collegiate sports.”

At this point, Arendt said they had to evaluate other factors.

“We looked at anatomic, neuromuscular, and hormonal factors,” she explained.

Anatomic factors include differences in anatomy, while neuromuscular factors examine how muscles behave. Hormonal factors could also have an effect on ligaments, making them more susceptible to injury. There have been hundreds of follow-up papers, all trying to answer the question of why women have more ACL injuries. Although medical research has yet to provide a definitive reason, Arendt thinks some factors may play a greater role than others.

“In retrospect, I’m happy to say that this article, among others, began to encourage us to look at the differences between males and females with regards to injury,” Arendt reflected. “I think this article was the beginning of the wave that acknowledged that there is sexual dimorphism in musculoskeletal injury and disease. We can find differences in nearly every single joint and nearly every disease category, and we need to recognize this difference, if we are going to treat our patients with the highest level of excellence.”

When asked about her accomplishment, Arendt modestly replied: “I’m happy to bring honor to our orthopedic department.”