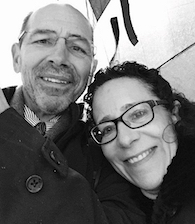 Bob and Myra McCormack met while students in LMP's then graduate program in pathobiology. Bob earned his doctorate in 1986, Myra the following year. They went on to stellar careers in biotechnology. Bob retired last February as head of Biomarker Translation, Disease Interception Accelerator, at the Janssen Pharmaceutical Companies of Johnson & Johnson. He was a member of the Institute of Medicine's Roundtable for Genomic Medicine and served on the Cancer Steering Committee for the NIH Foundation.

Following completion of her doctoral and post-doctoral studies, Myra earned a JD degree from the University of San Diego School of Law. She is currently Associate Patent Counsel, Pharmaceutical Group Leader in the Johnson & Johnson Law Department with responsibility for the patent attorneys and patent matters relating to J&J’s research and product development in the immunology, infectious disease and vaccines therapeutic areas for the Janssen Companies, Johnson & Johnson’s pharmaceutical family of companies. She is also currently President of the American Intellectual Property Law Association and a member of its Executive Committee and Board of Directors.

"My degree in pathobiology was a great foundation for the patent work that I manage at Johnson & Johnson," Myra said. "The Pathobiology program provided a broad knowledge in disease progression and an understanding of the biologic basis of a variety of disease states. This foundation has been invaluable for supporting drug development pipelines at a pharmaceutical company." She regrets the passing of the program. "While it was non-traditional on the one hand, its diverse curriculum was its strength."

Bob concurs that LMP's pathobiology program was key to his career. He started in R&D and progressed through clinical affairs, regulatory affairs, and scientific affairs across several companies. "The common denominator, provided by the pathobiology program, was a broad and strong understanding of disease mechanisms, which in my career was mostly cancer, but carried me through disorders as diverse as cardiovascular, metabolic, and infectious disease," he said.

At least in this case, pathobiology was a common denominator for career development, not to mention a life together.

LMP assistant professor Sarah Williams gave a talk in July at the Association of Pathology Chairs (APC) meeting describing how the core Entrustable Professional Activities (EPAs), developed by the AAMC, could be used as a framework for medical competencies or outcomes during the preclinical years of medical school.

Medical knowledge essential for many of the core EPAs is acquired during the basic science courses in medical school. Williams, with help from LMP professor and dean emeritus Deborah Powell, presented a poster entitled “Core EPAs in Basic Science Courses: An Important Role for Pathology.” The selected EPAs reinforce the idea that pathologists add value and can directly play a role in preparing students for clinical experience.

New immunotherapies — therapies that enlist and strengthen the power of a patient’s immune system to attack tumors — are revolutionizing the treatment of cancer. One of the leaders is chimeric antigen receptor (CAR) T cell therapy.

But CAR-T therapy is not without risks. Some patients experience life-threatening complications. LMP associate professor and immunologist Chris Pennell together with Regent’s professor of pediatric blood and marrow transplantation Bruce Blazar and the immunotherapy group at the Masonic Cancer Center have developed a mouse model that replicates the anti-tumor efficacy and toxicities experienced by patients treated with CD19 antigen-specific CAR T-cells. Pennell is lead author of “Human CD19-Targeted Mouse T Cells Induce B Cell Aplasia and Toxicity in Human CD19 Transgenic Mice” published in Molecular Therapy. In a commentary accompanying the article, CAR T-cell therapy pioneer Carl June and his University of Pennsylvania colleague Marco Ruella called the report “a milestone in the development of preclinical models able to predict human CAR T toxicity and efficacy.”

LMP recently welcomed two new faculty, one in renal pathology and one in molecular and cytogenetics.

Jan Czyzyk, MD joined LMP in March as part of the renal pathology service. Czyzyk was an associate professor at the University of Rochester before coming to Minnesota. Czyzyk’s research is focused on autoimmune diseases, particularly Type 1 Diabetes (t1D) and renal disease

Kelsey McIntyre, PhD, DABMMG joined the LMP faculty as an assistant professor July 31. She came to the University from Harvard Medical School where she was a Clinical Cytogenetics Fellow and a Clinical Molecular Genetics Fellow. McIntyre will participate in the department’s initiatives in cytogenetics and molecular diagnostics. Her research focus is on myeloid malignancies, particularly AML and MDS. 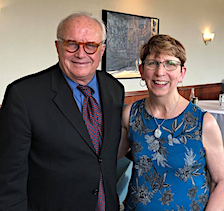 After many years of dedicated service, LMP sr. administrative director Linda Kenny was honored at a retirement reception in May at the Campus Club. Linda joined LMP in 1982 as an education program coordinator. Over the years she served on many key committees including faculty search committees plus the committee that set up the organizational framework for U of M Physicians. Linda is succeeded by Nicole Hilmoe.

Helen (Nordine) Hallgren graduated in 1965 from LMP’s Medical Technology program and later became an assistant professor in the same program and served as director of Graduate Studies for our master’s program in clinical laboratory science. She was also a researcher who published a number of papers on aging with Jim O’Leary, associate professor, who predeceased her. Hallgren passed away on April 2. The department will make a memorial in her name to the LMP Research and Development fund.