Cardiac physiology can be described in terms of hemodynamics, structure, electrical properties, and/or metabolic processes. Changes in any of these parameters may provide unique insights to physicians relative to the cardiac status of their patient. By using multiple imaging and physiologic monitoring modalities, the Visible Heart® Laboratories are investigating which parameters (or combination of parameters) provide physicians with the most accurate cardiac assessments of various types of patients and perhaps the best means to obtain the information.

Additionally, the Visible Heart® Laboratories regularly employ these multiple imaging and physiologic monitoring modalities to assess the delivery and functionality of implanted devices within the heart.

The use of animal models is critical in understanding cardiovascular physiology and designing new therapeutics targeted at cardiovascular disease. Selection of a specific animal model is based on many different factors including experimental design constraints, anatomy and physiology, cost, manageability of animals in research settings, familiarity of researchers with a specific animal, availability, quantity and quality of obtained data, and relevance to the human condition. Anatomical considerations are often overlooked, but remain an important factor in the selection of a proper model for certain types of cardiovascular research, because similarities and/or differences will determine the applicability of results to humans.

Researchers in our labs have compiled previously published information comparing large mammalian cardiac anatomy, determined the current opinions on large mammalian cardiac anatomy, and critically described qualitative and quantitative details of the anatomy of swine, canine, and ovine hearts, all which are used as animal models in cardiovascular research. Additionally, unique methodologies for the study of isolated human hearts have been described. Our results showed two major points:

These results provide further insight into large mammalian comparative cardiac anatomy, which will aid in proper animal model selection for cardiovascular research. Additionally, all dimensional measurements from the hearts were published in Dr. Alex Hill's PhD thesis for assistance in development of cardiovascular devices and for extrapolation to the human heart.

In whole-cell patch clamp, a similar microelectrode recording apparatus is used. The primary difference is that the microelectrode tip is approximately 1 micron in diameter, and is slowly positioned so that it just contacts the membrane of a cell. Instead of penetrating the membrane, the electrode is sealed or “patched” onto the membrane; using suction, if desired, the patched section of the membrane can be made to burst so that the cytoplasm becomes continuous with the solution inside the electrode. The larger orifice of a patch electrode allows the investigator to control either the current or the voltage across the cell membrane. By modulating either current or voltage, ion channel kinetics may be studied [1].

Surface or transmural electromyography in our labs entails the recording, detection, and analysis of cardiac activity recorded from the epicardial surface or within the heart wall. Recording can be accomplished with the use of needle electrodes (needle electromyography or EMG) or multielectrode arrays for the acquisition of the monophasic action potential (MAP). MAP recordings are important for reconstructing the time course of repolarization of myocardial cells [1]. For clinicians, MAPs are important tools for diagnosing arrhythmias or providing valuable information about local myocardial electrophysiology. It is also considered that new applications for monitoring regional differences in MAP morphologies may be to define areas in which to administer gene or cell therapies.

Studies that involve MAP recording can often amass a large volume of data with thousands of epochs from multiple sites. Subsequently, manual analysis of obtained data sets can be time consuming and labor intensive. Furthermore, manual evaluation can be susceptible to inter-observer variability that may significantly influence the interpretation of the analyses.

Some of the research in our labs involves designing specialized hardware and software that can ease this burden. Specifically, we have developed algorithms and user interfaces for the annotation of MAP signals at key fiducial points without the reliance on intense signal filtering or special hardware [2]. Our algorithms are subsequently tested within animal and human hearts that are functioning under venous conditions such as normal sinus rhythm and induced focal cardiac ischemia.

Our investigative approach incorporates several verification steps to minimize the need for labor intensive annotation corrections. Our current application also has a convenient graphical user interface (GUI) with many features that make viewing, saving, and annotation of recorded MAP signals efficient; it also incorporates features for manual correction. We believe that this research has clinical significance for required MAP analyses elicited by pathological conditions as well as for studying the effects of pharmacologic drugs.

Related publications from our labs:

Cardiac action potential mapping is an important tool for both clinicians and researchers. Analysis of the monophasic action potential (MAP) can lead to insight regarding ionic flux across membranes, electro-mechanical coupling, activation time, repolarization and depolarization cycles, and arrhythmia. More importantly, MAP recordings provide insight into local cellular electrophysiology, which can provide a very precise index of ischemia compared to measurements from surface (skin) electrodes.

MAP recordings have been conducted for over a century, with the earliest experiments in 1882 by Burdon-Sanderson and Page [1,2]. A number of mid 20th century action potential compilations were also made by Hodgkin (1951) and Grundfest (1947, 1961) using wick, pressure, and intracellular electrodes that facilitated an understanding of membrane structure and properties [3,4]. These studies were also important for elucidating the sequence of chemical and electrical events that occur during impulse propagation. Other clinical uses of MAP recording today include:

Evaluation of potential benefits of antiarrhythmic drugs: action potential analysis allows for the quantification of myocardial repolarization, a way to evaluate the specific electrophysiological effects of pharmacologic intervention.
Study of the effects of the dispersion profile on relative ventricular repolarization.
Investigation of T waves and/or underlying mechanisms of elicited T wave alternans.
Facilitation of the localization of precise ablation targets.
Detection of regional myocardial ischemia.
In our labs, action potential waveforms are acquired directly from the myocardium. Several methods exist for the acquisition of such signals. The major methods include the use of glass micropipette electrodes, metal electrodes of various design, multielectrode arrays, optical mapping, and contact or non-contact endocardial mapping. There are various designs for metal recording electrodes which are employed to monitor action potential waveforms extracellularly.

Our method involves using a needle electrode with two embedded conductors. The spacing between the active and reference conductors can be manipulated to control the sensing area. A permutation to this method involves using an internal conductor needle and the cannula of the needle as the reference electrode. The internal conducting wire is electrically isolated from the cannula. In a monopolar configuration, the needle is a single shaft, and the reference is taken from the subject ground. Our most frequently used electrode spacing is 0.30 mm, which allows for very local recording of myocardial activity.

Future projects in our labs include detailed cardiac ischemia studies using a local infarct model and the identification of ischemic regions and border zones. We are also in the process of setting up an optical mapping system that will allow monitoring the wavefront of propagation around regions of interest.

Related Publications from our labs:

The Visible Heart® Library is an open resource for academics, students, and industry professionals to use for the study of cardiac anatomy and data analysis. The library holds over 600 human and animal hearts. We are very fortunate to partner with LifeSource to obtain human hearts not deemed viable for transplant from organ donors. It is a great privilege to be given the opportunity to study these wonderful gifts, and we try to return the favor by allowing open research of the hearts in our collection. We supply many pictures, videos, anatomy and physiology tutorials, and other information related to cardiac anatomy, as well as some data from the heart library, at the free Atlas of Human Cardiac Anatomy website http://www.vhlab.umn.edu/atlas.

We encourage individuals and groups to visit the laboratories to do research on the hearts. While hearts usually must be studied in the Lab, we can share scans of some hearts to researchers upon request within a reasonable timeframe. We perform CT, MRI, endoscope, and micro CT imaging within our operations. Common uses of the hearts include: structural analysis, device placement and delivery testing, comparative anatomy studies, and educational outreach. The hearts in the library are preserved in three main forms. We use a formalin fixation process for the majority of our hearts to preserve tissue properties as much as possible. Some hearts are further processed into a plastinated state so that they can be handled with bare hands. Plastinated hearts are often used for educational outreach programs due to their ease of handling.

We offer tours of the library with standard Laboratory visits, or library specific visits may be set up as well. For comments, questions, or interest in study please contact John Cole, library curator, at cole0882@umn.edu. If you would like more interest in the outreach programs sponsored by the Visible Heart® Laboratories, please visit https://med.umn.edu/vhlab/about/outreach. 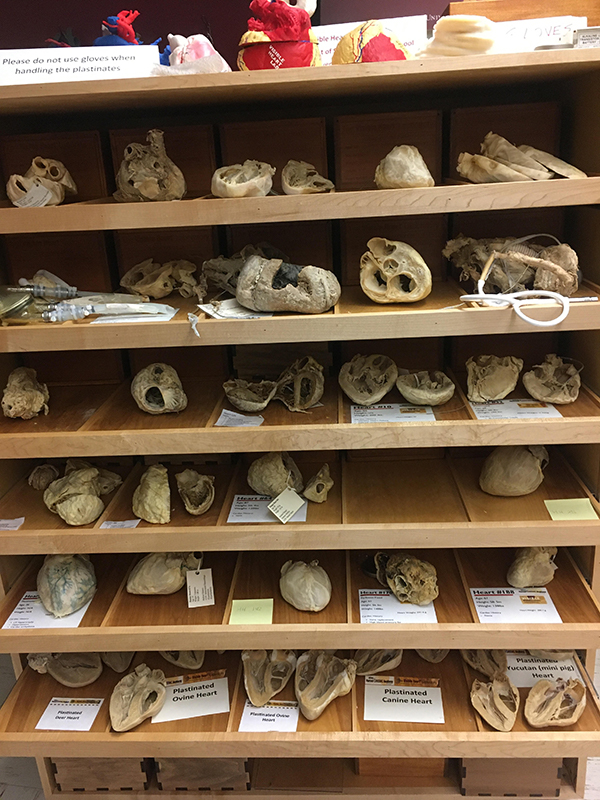