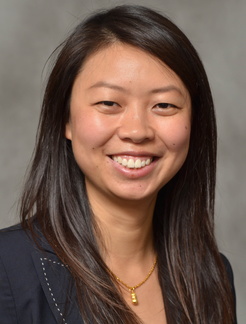 One out of every three seniors in the U.S. has Alzheimer’s disease (AD) or another form of dementia when they die, and the death rate from these conditions is growing. While the search goes on for effective drug therapies to treat patients with AD and other dementias, recent studies are showing that regular exercise may reduce disease symptoms. Now, Danni Li and her colleagues have found evidence that Alzheimer’s patients possess biomarkers that can predict which patients may benefit most from exercise therapy.

Li, an LMP associate professor, and Fang Yu of the school of Nursing led a University research team reported their preliminary findings based on the FIT-AD, a pilot randomized controlled trial to investigate the effects of a 6-month, individualized, moderate-intensity cycling intervention (20-50 minutes per session, 3 times a week) on cognition in older adults with mild-to-moderate AD.  They reported their findings at the annual meeting of the American Association for Clinical Chemistry.

In their study, Li and her colleagues used targeted metabolic analysis to measure the levels of 188 metabolites in 26 FIT-AD participants’ blood before the trial began and after 12 months. They found that changes in the levels of two phospholipids and five amino acids were associated with an improvement in AD patients’ cognitive abilities.  These may work synergistically with regular exercise to improve cognition and could be used as biomarkers that predict which patients are most likely to see their AD symptoms reduced following an exercise regimen.  A future follow-up study with a bigger sample size is necessary to establish the ability of these metabolites to predict cognitive responses to aerobic exercise treatment in AD.

“This clinical approach is in line with the model of precision medicine, and finding the right person who will respond to the right therapy,” Li said.

LMP clinical chemistry fellow Ghaith Altawallbeh was first author of the study and presented a poster at the AACC meeting.