Sound Waves and How They Move

Acoustics is the study of sound. In this section we're going to explore how sound waves travel from the vibrating vocal folds, through the vocal tract (throat), and out into the air.

Sound happens when air molecules get moved, and the movement continues in a wave (much more on that later). When the sound is continuous (like the human voice), it's because there's some vibration that moves, or disturbs, the air molecules. In the case of the human voice, it's the vocal folds that are vibrating. You actually know a lot about vibration, even if you've never thought about it. 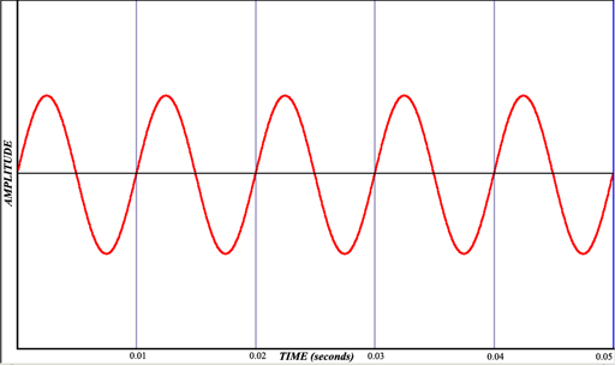 Figure 14: A sine wave - like the beginning of "The Outer Limits" for you boomers. 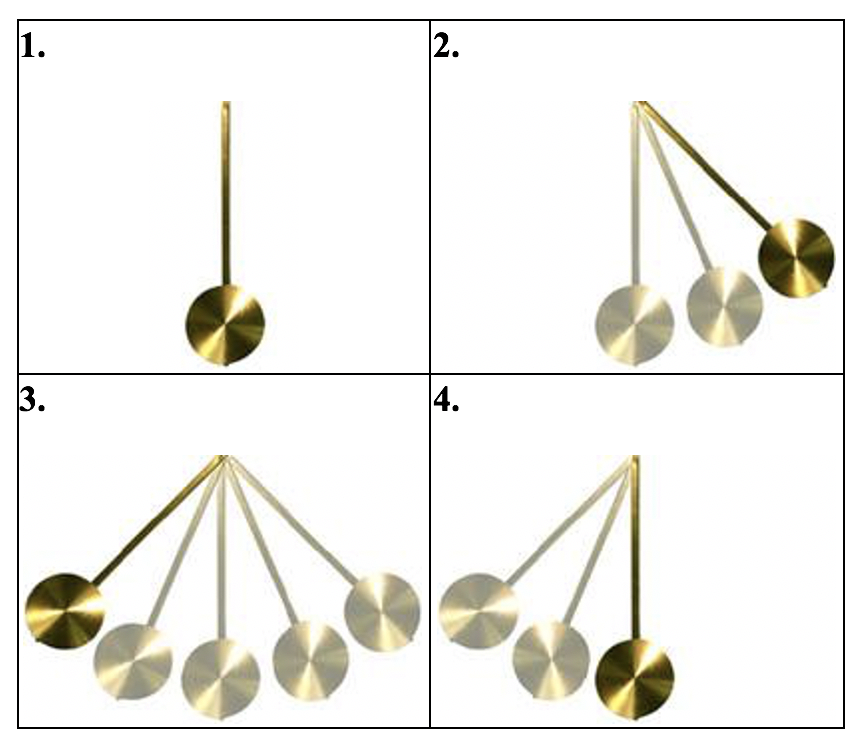 Figure 15: Movement of a Pendulum.

There are only three properties that can be manipulated with a swinging pendulum, and these factors help illustrate the properties of vibration.

Frequency is how many times per second the pendulum crosses its midline. Frequency measures the speed of vibration. Frequency is measured in Hertz (the abbreviation is Hz, but we always say "hertz"). In sound, frequency of vibration gives us the pitch of the sound. The faster the vibration, the higher the pitch that we perceive. So, we say that the perceptual correlate of frequency is pitch. Click here to see the equivalences of pitch and frequency. (Yes, vocal folds can vibrate faster than 1000 Hz, or 1000 vibrations per second!)

In sound, amplitude of vibration gives us the loudness of the sound. The greater the amplitude, the louder the sound we perceive. So we say that the perceptual correlate of amplitude is loudness.

BUT, there's not a direct correlation between amplitude and loudness the way there is for frequency and pitch. Acoustic scientists distinguish between the amplitude of vibration, the intensity (or sound pressure level -- we won't go into detail on this property in this section), of the sound wave, and the loudness of the sound perceived. Those are all measured differently, and don't correspond to each other in a one-to-one fashion. In the case of the voice, the amplitude of the vibration of vocal folds may determine the intensity of the sound wave, but many other factors influence our perception of the voice's loudness. Read on, and we'll discuss this topic more, but some of the discussion is beyond the scope of this website.

Phase is measured in degrees away from midline, just like degrees of a circle. If one vibration starts it's excursion in one direction at exactly the same time another starts its excursion in the opposite direction, they are said to be 180 degrees out of phase.

In sound, phase doesn't have a perceptual correlate in the way frequency and amplitude do. If we could hear two simultaneous sine waves with the same frequency and amplitude but were out of phase with one another, we might only hear a slight buzziness to the sound. In the complex sounds we hear, we don't perceive the phase differences as a separate entity. Phase differences are very important in voice though, because different portions of the vocal folds may vibrate out of phase with each other, resulting in very complex vibration. More about that later…

So far we have been talking about listening to sine waves. In real life, though, we don't actually hear sine waves or simple harmonic motion. Rather, sounds that we hear are usually the result of complex vibration in which there are many simultaneous frequencies, amplitudes, and phase differences.

A picture of vibration as it proceeds through time is called a waveform. A waveform shows properties of vibration.

Let's start with the most basic waveform, which is a picture of a sine wave (a.k.a. sinusoid, or simple harmonic motion). 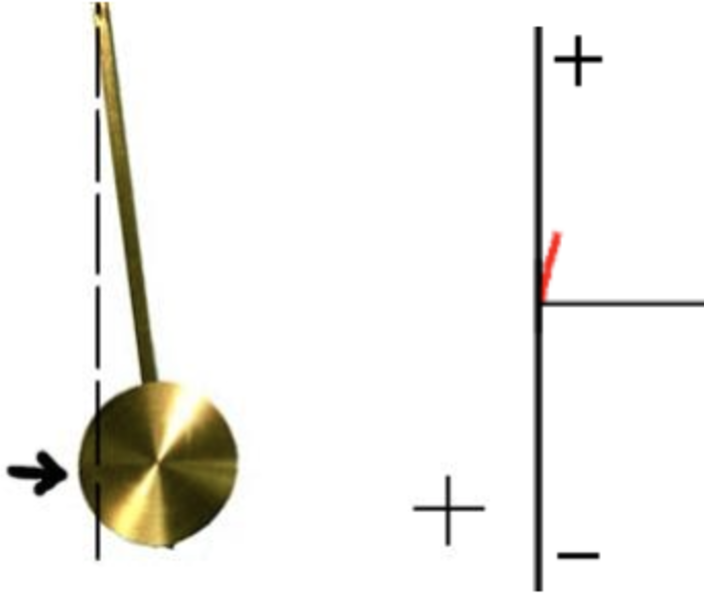 A - pendulum swings away from midline in a positive direction. 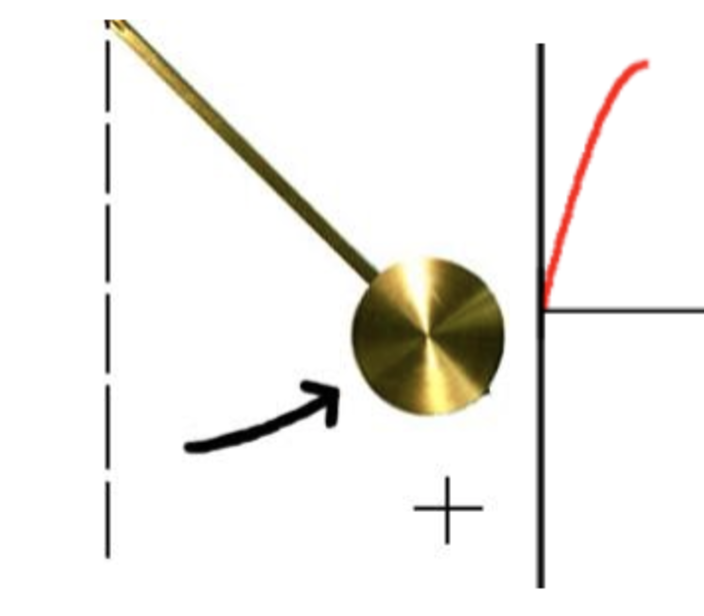 B - pendulum reaches it's furthest point, reverses itself and swings back toward midline. 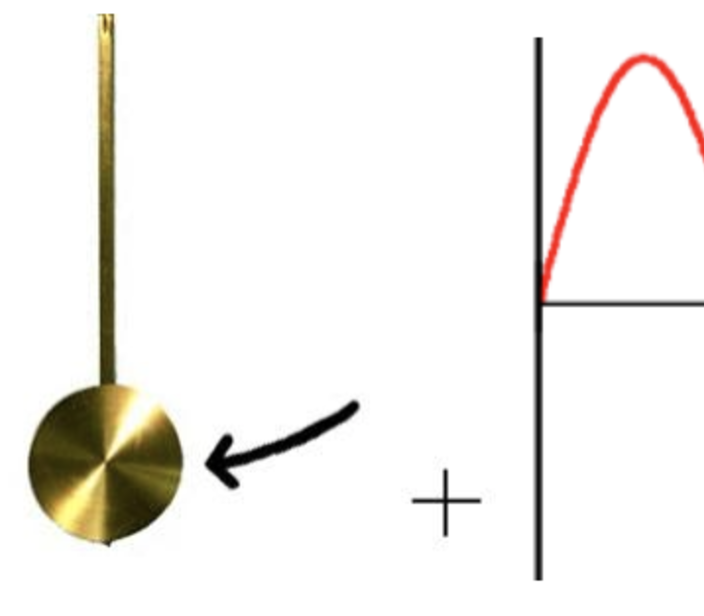 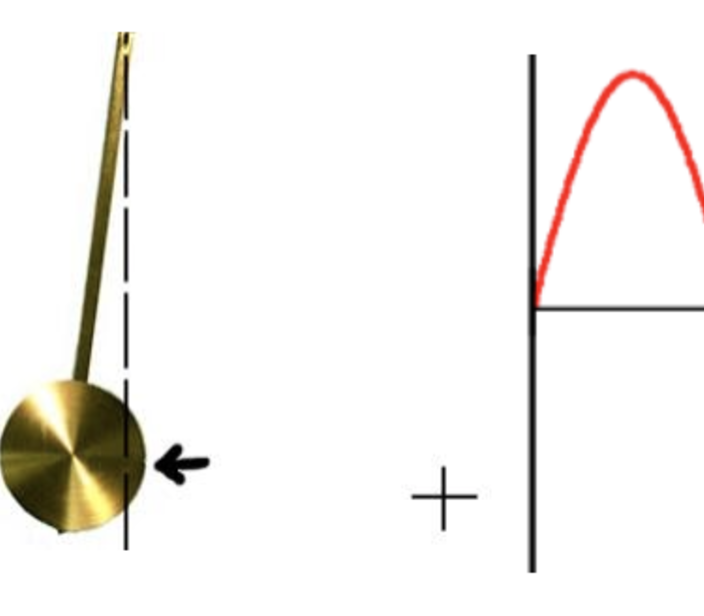 D - pendulum swings away from midline, now in a negative direction. 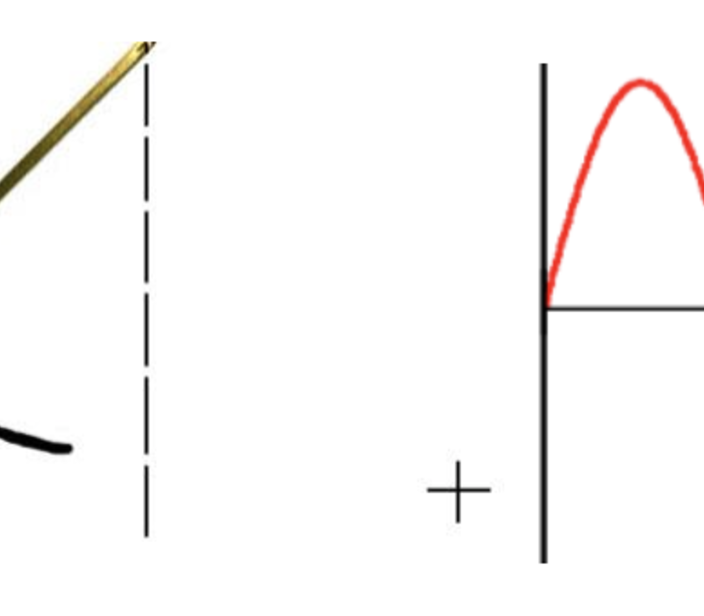 E - pendulum reverses itself and swings back toward midline. 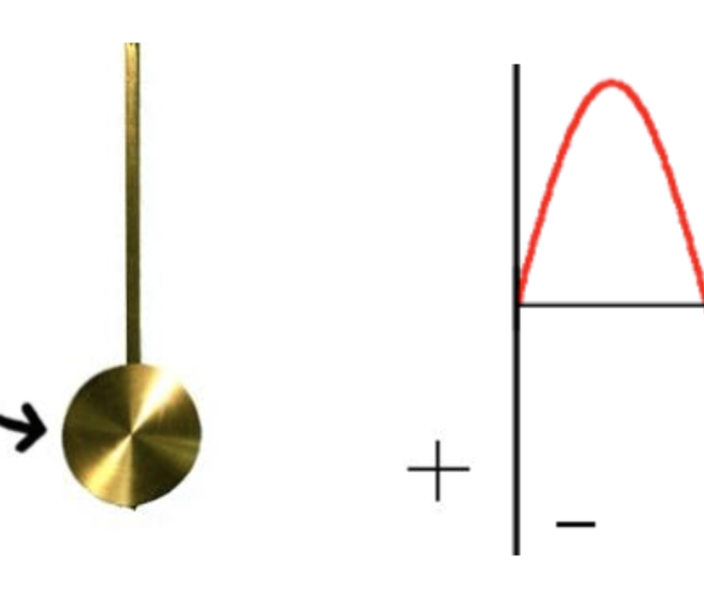 Movement of a Sound Wave

Sound Wave - A sound wave is a disturbance of air molecules, propagated through air.

For our discussion, assume the disturbance of air molecules will eventually disturb the tympanic membrane (ear drum) causing a vibration to go into the brain, where it is interpreted as sound.

The journey from the eardrum into the brain is very cool. Go look it up on the web!

The wave along the slinky is like a sound wave as it travels through air. Each air molecule stays in one place, bouncing back and forth, slamming into the molecule ahead of it, and then slamming into the molecule in back of it. Molecules moving in a forward direction will get bunched up, or compressed, and then more spaced apart, or rarefacted, as they bounce backward away from each other. The compressions (bunched up areas) keep moving along, eventually dying out due to the friction of the air, or ending up on someone's ear drum.

In case this sounded too easy……The molecules moving forward create compressions, and the molecules bouncing backward create rarefactions, BUT, when the backward moving molecules bump into forward moving molecules just behind them, that might create another compression, depending on how soon the next wave starts and how far the molecules are moving (which depends on the amplitude of the original disturbance). And, if the air molecules run into a surface that deflects them, they can start a whole series of compressions and rarefactions moving away from that surface. And in case that wasn't complex enough, air molecules, unlike bands in a slinky, can move in any direction. This means that, as all the air molecules surrounding the disturbance are moved, the sound wave travels outward in ALL directions; those compressions and rarefactions can run into anything, anywhere, and be deflected back from who-knows-where.

That all makes sense when you consider the sound you make when you yell across a large, open space. But you probably didn't think about the sound wave as it leaves your vibrating vocal folds and travels through your vocal tract. That sound wave travels in a very complex pattern of compressions and rarefactions, and when the pressure hits structures like the roof of your mouth and your teeth, it's deflected back, and can exert pressure back onto your vocal folds, affecting the way they vibrate. That ends up being pretty important.

Figure 17: Remember the waveform - the picture of a sound wave?

Your Voice & How it Works

Oh, by the way, if a tree falls in the forest, there's a sound wave that travels through the air, whether there's an ear drum to hear it or not.