Some 90 percent of the estimated 276,000 women diagnosed with breast cancer in the U.S. in 2020 can expect to live five years or more.   The death rate from the disease has been dropping slowly but steadily for three decades thanks to mammography, early diagnosis and better clinical care.  Biomarkers that predict the onset of aggressive disease could give clinicians critical information for designing better therapeutic programs and potentially accelerate the slowly dropping breast cancer death rate.

LMP assistant professor Andrew Nelson and then-residents Aastha Chauhan, Aqsa Nasir, and Jessica Gruenberg were part of a research collaboration that homed in on just such a breast cancer biomarker, one that may provide an early prognostic marker of disease aggression that could inform interventions and treatment strategies.  Nelson and his trainees are coauthors of “Tumour-associated macrophages drive stromal cell-dependent collagen crosslinking and stiffening to promote breast cancer aggression” published in Nature Materials last month. They joined investigators from Denmark, Canada, Oregon Health and Science University, Duke University, the University of Colorado, and the University of California, San Francisco (UCSF).  Nelson and Ori Maller, the study’s first author, were colleagues at the University of Colorado Medical School before Nelson joined LMP.

Breast cancer cells in stromal tissue of the tumor microenvironment expand their numbers and invasiveness by creating their own fibrous protein networks of extracellular matrix (ECM).  Collagen is the primary ECM protein they secrete, and it is collagen’s dense connections, cross-links, and stiffness that are responsible for aggressive disease and resistance to chemotherapy.

UCSF’s Maller and Valerie Weaver, the study’s lead investigators who had conducted the laboratory animal work, reached out to Nelson given his expertise in mRNA and protein biomarker studies performed on human cancers, particularly in breast cancer and stroma-tumor interactions. “After reviewing their patient sample data and reviewing preliminary IHC [immunohistochemistry] results on the breast cancer patient TMAs [tissue microarrays, which allow high-throughput protein immunohistochemistry], I worked with them to develop a robust, reproducible approach to quantifying the expression of PLOD2 within the tumor-associated stroma,” Nelson said.  His scoring approach took into account different levels of inflammatory cells composed mainly of macrophages, the white blood cells that surround and kill microorganisms, remove dead cells, and stimulate the action of other immune system cells.  Tumor-infiltrating macrophages have been found to drive the collagen cross-linking and the stromal tissue remodeling process.

To quantify PLOD2 expression within the tumor-associated stroma, Nelson recruited and trained Chauhan, Nasir, and Gruenberg to score tissue hundreds of microarray spots on the breast cancer tissue samples, indicating PLOD2 expression.  After training them to conduct the novel analysis, Nelson split the cohort into overlapping segments that were scored blindly to eliminate bias.   “I compiled all of our scored data and I independently scored some cases and analyzed the overlapping cases that had been assigned to two of the residents,” Nelson said.  Through statistical analysis, the approach demonstrated that their stromal tissue PLOD2 biomarker scoring system was valid and reproducible and could be used in patient prognosis and treatment – in brief, a breakthrough in clinical molecular pathology. 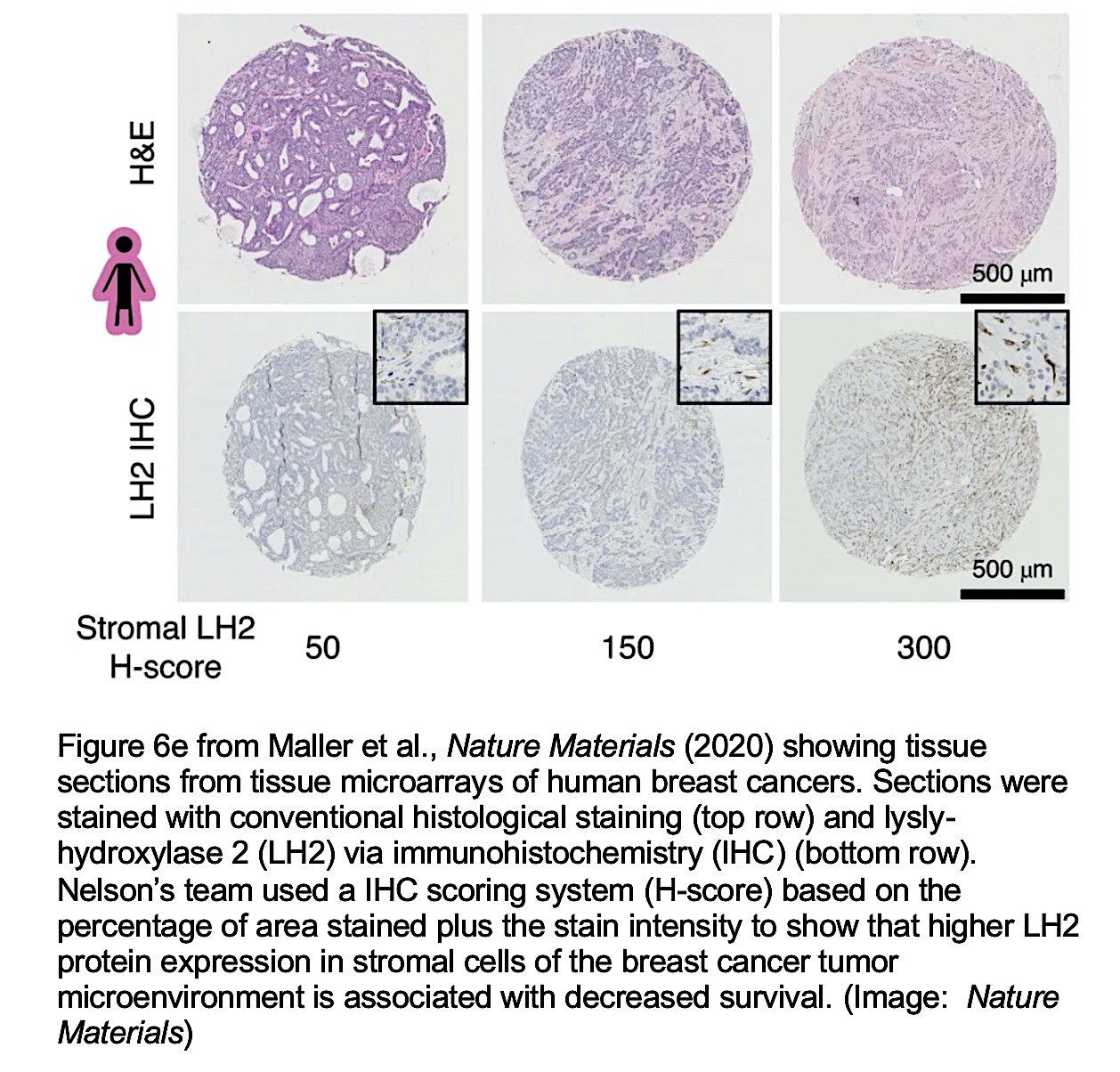 All three residents “engaged intellectually in the refinement of the scoring rules for this stromal PLOD2 / IHC analysis,” Nelson said.  “Their contributions to both implementation as well as execution of the pathology analysis was absolutely critical.”  He singled out Chauhan, now an LMP cytopathology fellow, for special praise. “She has a fantastic eye and was very thoughtful in regards to the underlying biologic hypothesis and the reality of implementing a novel scoring approach.”