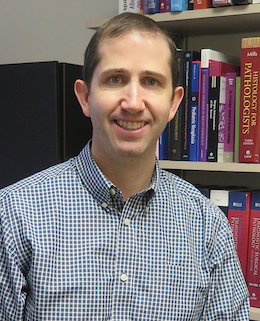 University of Colorado School of Medicine, 2010

Dr. Nelson is an anatomic and molecular genetic pathologist and is a member of the Division of Molecular Pathology and Genomics.  He earned his doctoral degree in cancer biology and experimental pathology with a focus on cell signaling mechanisms that regulate the function of BRCA1 and BRCA2 in breast and ovarian cancer. He collaborates with colleagues in both clinical and basic research projects involving solid tumor molecular diagnostics.

Andy was the lead scientist in the design, development, and implementation of the current microfluidics-based next-generation sequencing (NGS) platform for oncology in the Molecular Diagnostic Laboratory. The current panel tests for over 7,000 important mutations within 21 genes closely linked to the outcome and treatment of various solid and hematologic malignancies. The immediate goal of his work in the area of NGS oncology is to improve quality, turnaround time, logistics and workflow with the current pipeline as well as preparing for further developments in the rapidly advancing field. These efforts include developing tools that provide improved annotation capabilities for therapeutic relevance and clinical trials to in turn provide more value to clinical colleagues and patients. Expansion of the oncology NGS testing will include two major efforts: 1) technical advances to improve testing capability of minuscule biopsy samples, and 2) expanding the number of genes tested to support clinical research efforts at the University.

Current approaches to treating cancer are based primarily on tissue origin and histologic subtypes. Andy sees a major challenge ahead in the integration of genetic information with the traditional tissue-based categorization of cancer. A gene target that responds to therapy in one tissue may not respond to the same therapy in a different tissue, based on the gene’s differing transcriptional and epigenetic profile in the two tissues. Genetic alterations alone cannot explain tumor behavior or a patient’s prognosis. A major challenge for the field is finding a way to integrate knowledge across different platforms that incorporate genetic, epigenetic, transcriptional, and proteomic alterations within the signaling pathways that drive cancer progression.

Dr. Nelson believes curiosity-driven basic science is critical to revealing the mechanisms of cancer progression. Combining anatomic pathology and molecular genetics will allow scientists to analyze tissue in its structurally native form and explore cell-to-cell interaction in an ordered environment. He is collaborating with departmental colleagues and others in the Breast Cancer Translational Working Group headed by the Cancer Center’s Douglas Yee. Andy is co-investigator with Dr. Yee of a pilot project involving Nanostring gene-expression profiling of human breast cancer tissue and cell lines. They are investigating some 350 genes that cover many of the signaling pathways known to be involved in breast cancer. Nanostring technology – a kind of molecular bar-coding system for gene expression analysis -- is more robust than standard microarrays for analyzing paraffin-embedded tissues. Within this framework, Nelson and colleagues Jim McCarthy, Kaylee Schwertfeger and others have developed a 70-gene signature designed to reveal mechanisms of stromal alteration that support breast cancer progression. The working hypothesis is that altered signaling through hyaluronic acid, activation of myofibroblasts, and the influx and activation of inflammatory cell integration-specific macrophages all conspire to promote tumor progression. They are investigating the specific cell types within the tumor microenvironment in which these genes are up-regulated. From the results they plan to develop an intraductal model of breast cancer progression in mice. They will use genetically modified and traceable stromal cells in an effort to elucidate stromal mechanisms associated with breast cancer progression. Dr. Nelson is also providing data for the working group in studies of DNA repair and progesterone receptor signaling in breast cancer.

From the standpoint of anatomic pathology in the genomic era, Dr. Nelson believes it is important to flip the model of “bench to bedside” to “bedside to bench” first and then translate what is learned back to patient care.