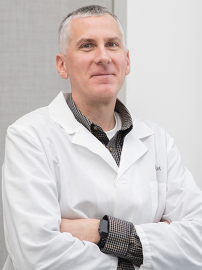 Tumor immunology, apoptosis The research in my laboratory studies the therapeutic potential of apoptotic cell death in the treatment of cancer. The tumor necrosis family member, TRAIL/Apo-2 ligand, is a potent inducer of tumor cell apoptosis, but is non-toxic against normal cell and tissues, suggesting that TRAIL might be administered as an antitumor therapeutic without the side effects seen with other TNF family members, namely TNF and Fas ligand, and traditional chemotherapeutics.Employment of various gene delivery systems, such as non-replicative viral vectors, is making it possible to administer genes directly into tumors sites in situ. Using this technology, a recombinant, replication-deficient adenoviral vector encoding the full-length TRAIL cDNA (Ad-TRAIL) was developed in the laboratory as a way to induce tumor cell death. Current experiments are investigating the ability of Ad-TRAIL to activate systemic antitumor immunity.Additional studies are investigating the ability of apoptotic cells to influence the immune response. For these studies, we use a number of experimental model of tolerance as well as an experimental model of sepsis.