“I woke up and there was no paralysis,” said 77-year-old Owatonna, MN, resident Don Matejcek (pictured above). “I couldn’t believe it.”

Don had just come out of two days of surgery for a problem that began in November 2019 when he noticed some numbness in his left arm and leg. A month later, he started getting weakness on that side. The weakness evolved into paralysis and Don had to use a walker, dragging his left leg along. He is also left-handed, which meant he couldn’t do anything with his dominant hand. After a February 22, 2020, MRI showed a mass where the brain stem joins the spinal cord, Don was referred to the University of Minnesota Neurosurgery Department and into the care of skull base specialist, Andrew Venteicher, MD, PhD.

Multiple challenges
“The mass was in one of the most challenging areas to get to in terms of surgery,” said Venteicher. That wasn’t the only challenge the neurosurgeon faced. “Don’s symptoms were so severe and had progressed so quickly that we knew he needed surgery right away but there were COVID-19-related restrictions on such procedures,” he said.

Venteicher advocated strongly for Don’s surgery with University of Minnesota Medical Center leadership. “Dr. Dan Guillaume from the Neuroscience Service Line and Dr. Greg Beilman from M Health Fairview were instrumental in securing permission for the procedure and getting Don pre-operative COVID-19 testing, which was difficult at the time,” said Venteicher. “They also helped ensure we had appropriate protective gear for the patient and surgical team.”

Above and beyond
Venteicher credits his Care Coordinator, Ann Messer, RN, for making everything happen. “She went above and beyond to ensure we could see Don in the office,” he said. “And when it was time to create the surgical plan, she made sure we could get everything together, despite the COVID complexities.”

Don saw Venteicher for the first time on Wednesday, April 1, after he passed the COVID-19 screening required to enter the University’s Clinics and Surgery Center. “We wore masks and gloves during the exam and maintained the six-foot distance as much as possible,” said Venteicher. On April 3, Don was told that his surgeries were scheduled for April 6 and 7. 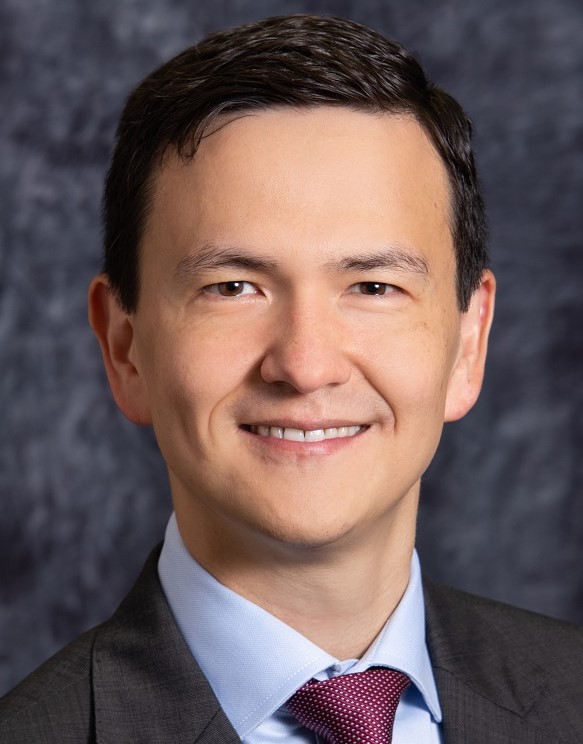 Venteicher (pictured at left) had to stage the surgeries to first remove the golf ball-sized mass and then to stabilize the vertebrae in Don’s neck. He partnered with Matthew Tyler, MD, from the Department of Otolaryngology, Head and Neck Surgery, on the first procedure. They decided to use a unique approach, going in through Don’s nose, rather than through his mouth. “If you look straight back from the nose, you can often get to everywhere from the skull base down to the upper cervical vertebra of the spine,” explained Venteicher. “It’s a terrific minimally invasive approach; however, it requires additional fellowship training, an experienced team of both neurosurgeons and ENT [ear, nose and throat] surgeons, and comfort using an endoscope and special, angled instruments.”

The surgery also took advantage of the University’s new state-of-the-art T-suite, where the surgeons could use intraoperative MRI to guide the removal of the mass. “Based on its imaging characteristics, we suspected the mass was a pseudotumor, which is inflammatory tissue that arose from spinal instability in that area,” said Venteicher. Removing the firm, solid mass required more than seven hours. “We took an MRI partway through the procedure, which allowed us to find and remove all of the mass causing his paralysis,” explained Venteicher.

The next day, Venteicher performed a cervical fusion on Don, which solved the root problem. After consulting with spinal surgeons, Ann Parr, MD, PhD; and Kristen Jones, MD; Venteicher went in through the back of Don’s neck to place small rods and screws that would stabilize his spine.

Kept family informed
Don’s family couldn’t be in the hospital with him because of COVID-19 restrictions. “Dr. Venteicher called several times during the surgeries and did a great job of letting them know what was going on,” he said.

Don regained movement on his left side when he was recovering in the hospital. “When I removed the sutures two weeks after his discharge, Don could walk without the walker,” said Venteicher. “He had a very quick, dramatic recovery and I anticipate it will just get better.” 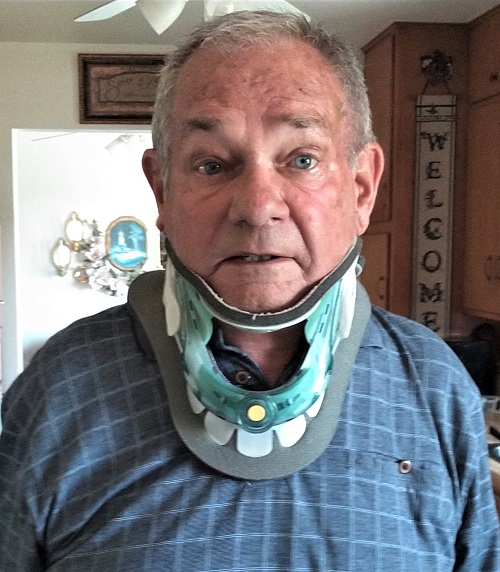 Recovering from the two surgeries has been fairly easy for Don. He wears a neck brace when he leaves the house and is working with a speech therapist on some swallowing issues due to swelling in his throat. Regardless, he says he’s not using the walker at all now, eating “real food,” and feeling much better.

“I was so glad they let them do the operations right away,” said Don. “I can’t thank Dr. Venteicher and Dr. Tyler enough … and the nurses and hospital staff … for all they did.” He kept telling his nurses that they were all angels and was delighted one day to wake up to a nurse named Angel.

“Successfully managing a case like this during a pandemic requires excellent leadership and teamwork,” said Venteicher. “All those people came together despite COVID-19. It was so inspiring – everyone realized how much Don needed the surgery.”