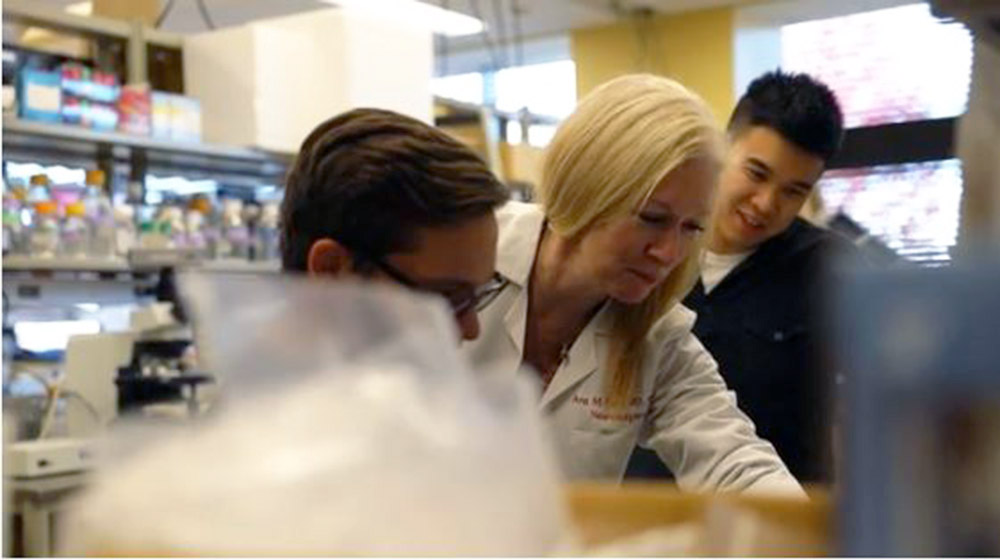 The Parr lab at the University of Minnesota, under the leadership of Ann Parr, MD, PhD, focuses on doing spinal cord injury translational research (from “bench to bedside”).

One of the more cutting-edge projects the lab team is working on involves cell transplantation therapy. The team transplants autologous skin or blood cells (autologous meaning coming from a person…from “yourself”) that have been transformed into OPCs (Oligodendrocyte Progenitor Cells). These cells are implanted in an injured spine to help begin repairing damaged nerve cells. “Our major goal is to bring this to clinical trial for acute spinal cord injury,” Parr noted.

How does it work? Using genetic manipulation, the team changes the skin or blood cells into OPCs through the use of safe, non-disease-inducing viruses. The viruses change the genetic makeup of the original cells to create OPCs. “What makes a cell a cell,” asks Parr. “It’s the genes it expresses; if you can force it to express different genes it becomes something else.” In this case, OPCs. The role of an OPC is to provide insulation for nerve cells. When a spinal cord is injured, its nerve cells often lose their myelin sheath, which is similar to an electrical cord losing its insulation. Nerve cells cannot function normally without that insulation.

The technology used to create the OPCs is brand new, according to Parr. It was developed by Shinya Yamanaka and Sir John B. Gurdon, winners of the 2012 Nobel Prize in Physiology or Medicine. One aspect of Parr's research is determining how to speed up the transformation of the skin or blood cells into OPCs.

Collaborating in Other Areas

Parr’s lab is also involved in a number of collaborations with other groups. “We’re working with the Spinal Cord Society, who wants to use our cells in their chronic spinal cord injury model,” she said. "Chronic" in this case means someone who has had the injury for some time. The team is also working with the U’s Center for Magnetic Resonance Research (CMRR) to look at tracking cells using magnetic or chemical “labels” and developing new ways to image cells. In addition, the team will soon be collaborating with the U’s College of Veterinary Medicine on research related to spine-injured dogs.