Our lab’s research has primarily focused on treating ischemic stroke and traumatic brain injury (TBI) with neuro-regenerative therapies, using either stem cells or direct reprogramming techniques. Recovery after stroke or TBI is limited in the human adult brain due to minimal or no regeneration of lost neurons. Over the past 10 years, more work has been done on the potential use of neural stem cells to regenerate neurons in this setting. We focus on direct manipulation or reprogramming of non-neuronal cell populations through viral transduction of various neurogenic transcription factors. We have been able to reprogram non-neuronal cells into neurons both in vitro and in vivo. Interestingly, we found a significant difference in the neuronal phenotype generated and maturation of neurons between the striatum and cortex suggesting a significant environmental influence. Our study was one of the first to demonstrate direct reprogramming, in vivo, in a rodent brain. More recently, we have been focusing on using an adeno-associated virus and have found both a reprogramming and a neuroprotective effect in stroke and TBI.

Neuroinflammation
Our lab team has also used various animal models of stroke to study different interventions aimed at reversing the cascade of events that lead to cell death in the penumbra. We initially focused on apoptosis and discovered that a bile acid with anti-apoptotic properties minimized cell death in the penumbra and resulted in improved outcomes when given within two hours after stroke. Interested in extending this therapeutic window, we began testing the neuroprotective effect of administering human umbilical cord blood stem cells (HUCBSCs) intravenously. Surprisingly, we discovered a robust neuroprotective effect when HUCBSCs were administered after stroke, even out to 48 hours. More recently, we have focused on the mechanistic action responsible for this protective effect in both stroke and TBI and have found that HUCBSCs act directly on the heightened inflammatory state after the injury, returning it to near baseline levels. 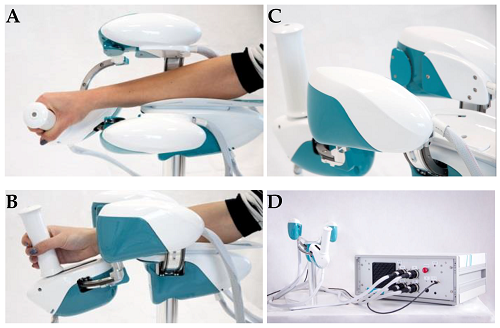 Neurons in regions unaffected by a stroke may take on roles previously performed by those destroyed by it. This neuroplasticity can potentially be induced in humans by inhibiting the normal contralateral inhibition of the area around the infarction using transcranial magnetic stimulation (TMS). This effect is then enhanced through repetitive activity involving the ipsilateral (side of the stroke) hemisphere of the brain. Our initial pilot study examined patients who had suffered a stroke and had arm weakness or paralysis. Using noninvasive brain-computer interface, we discovered that these patients could be trained to perform a single arm action in a 3D, virtual reality environment. In addition, patients with basal ganglia strokes performed much better than patients with cortical strokes. Currently, we are using animal models of stroke and treating the condition with neurorobotic tools, such as Wristbot (pictured above left) and KinArm, to better understand the pathophysiology of neuroplasticity following stroke. Our long-term vision is that understanding neuroplasticity better can help improve treatments such as transcranial magnetic stimulation.

Pathophysiology of neuroplasticity to enhance neuro-rehabilitative therapy of stroke