Three-month-old Colton Fearing is a charmer. Incredibly vocal, his happy personality is already shining through. When he was discharged from the hospital, however, the pediatrician told his parents, Cassie and Mike, that Colton had a condition that was causing his head to be misshaped. “At his two-day wellness check, our pediatrician said they would watch it,” said Cassie.

When Colton was one month old, his pediatrician referred him to the U of M Masonic Children’s Hospital Craniofacial Clinic. On June 4, 2019, they met with Clinic nurse practitioner Leah Kann, who reviewed Colton’s CT scan and confirmed that one of the sutures in his skull had fused, affecting his head shape. Sutures are joints made of strong, fibrous tissue that hold the seven bones of the skull together.

That same day, Colton and his parents met with pediatric neurosurgeon Carolina Sandoval, MD; and plastic surgeon, Jo Barta, MD, from Gillette Children’s Hospital. Sandoval told Cassie and Mike that Colton has what’s known as scaphocephaly. “He had an abnormally long head with a palpable ridge on top,” she explained. “They were all the clinical signs of having an early suture closure and its associated problems.”

In Colton’s case, the sagittal suture was fused. “The sagittal suture is located on top of the head, extending from the soft spot to the back of the skull,” said Sandoval. “Premature closure of one of the sutures in the skull prevents it from growing normally and expanding in all directions.” That was why Colton’s head was misshaped. 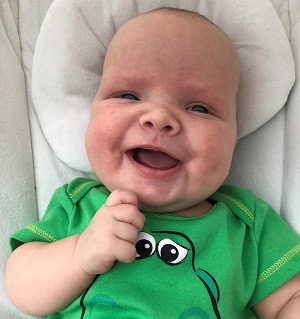 Sandoval explained that there were a couple of treatment options. One involved major surgery. “We work alongside a plastic surgeon to open the scalp from side to side and expose the entire cranial vault,” explained Sandoval. “We then remold the skull by releasing the prematurely closed suture and surgically reshaping the other bones that were deformed as a result. That procedure is routinely done on older children.”

But there was another option.

Because Colton was so young, he was a candidate for a minimally invasive procedure that is done on babies less than four months old. “With the advance of endoscopic techniques, we can now do operations through very small incisions,” said Sandoval. “That way, we remove a smaller section of bone – just the suture that is fused – and make some additional cuts that will allow the skull to be reshaped progressively, driven by normal brain growth.”

“If we had waited,” Cassie said, “we wouldn’t have had that option. He would have had to have the open surgery at six months.”

After coordinating schedules, Colton’s surgery was scheduled for July 11, 2019. “Dr. Barta and I arrange these procedures when it’s best for the patients,” said Sandoval. “We were happy we were able to do it for Colton.”

There was just one caveat. “The parents must commit to having their babies wear a helmet for up to a year following the surgery to mold the skull reshaping process,” Sandoval noted. “The only time it’s taken off is when you’re bathing the baby or for daily care for a maximum of about an hour a day.”

Cassie and Mike had no problem making that commitment. “We are going to be religious when it comes to that,” Mike said. “We want his head to come out fine.”

On July 11, 2019, Colton was scheduled for surgery. “I hope that he can bounce back,” Cassie said. “I have heard how quickly that happens…I just want my happy boy back.”

Stay tuned. In the final story of this series, Sandoval and Colton’s parents will walk us through how the procedure went, what the aftercare looks like and how he is adjusting to wearing his helmet.