Can you diagnose facial pain with just an MRI? A U of M team gets out of their comfort zones to find out.

For years, it has been an accepted practice to confirm the debilitating facial pain condition known as trigeminal neuralgia (TN) using magnetic resonance imaging (MRI) to see if the trigeminal nerve is being compressed by neighboring blood vessels or other structures and to offer brain surgery as a result. When he was a neurosurgery resident at the U of M, David Darrow (pictured here), MD, MPH, who is now a faculty member, wondered if that was the best approach, given what he was seeing in the Neurosurgery Department’s TN patients.

Compression = force
He became interested in the whole notion of compression in this context. “Compression implies a force. When we get an MRI, it tells you about the structures involved but nothing about force,” Darrow said. “We wanted to test the possibility that if you took a random sample of MRIs and see that the nerve looks compressed on the scans, can you predict the presence of trigeminal neuralgia?”

The result of their work is a paper titled, “The practical limits of high-quality magnetic resonance imaging for the diagnosis and classification of trigeminal neuralgia.” It will be published in the October 2022 issue of Clinical Neurology and Neurosurgery. 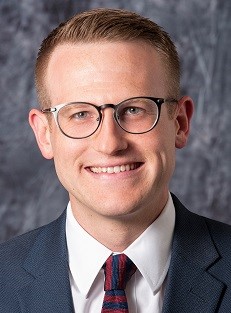 The paper’s message isn’t one that everyone wants to hear, according to Darrow (pictured here). He believes there is a fundamental flaw in associating the markers of compression on an MRI with a diagnosis of trigeminal neuralgia. “I was very skeptical about this, despite it being well accepted in the community,” he said. “The problem is with patients who have facial pain but don’t have compression.”

Darrow was concerned that there might be confirmation bias – a tendency to search for, interpret, favor, and recall information in a way that confirms or supports one's prior beliefs or values – related to interpreting what is seen on MRIs when diagnosing trigeminal neuralgia. “Patients come in and say they have facial pain that sounds like trigeminal neuralgia,” he said. “They have TN symptoms, including electric shock and triggered pain.” An MRI is taken and shows nerve compression, which confirms the diagnosis – perhaps incorrectly, from Darrow’s perspective.

Ability to predict TN
To test the accuracy of using MRI to diagnose TN, the team gathered scans from 50 people who got them for diagnosing trigeminal neuralgia and 50 people who had similar scans for other reasons such as hearing loss. Haines, Grande, McKinney, and Quinn were tested on their ability to predict whether the MRI indicated trigeminal neuralgia.

“I blinded all the scans and had them read each side of the person’s head and tell me if they thought there was compression and if so, did they think the patient had trigeminal neuralgia,” Darrow explained. “What I found was that the interrater agreement about compression was moderate – 50 to 60 percent agreed about what was on the image. When tested on diagnosis, they did just better than chance. You would think that with 50 patients and 50 controls, it would be easy to see the difference. It wasn’t. It’s a complicated disease process that’s not readily explained by this very old diagnosis theory.”

Challenging process
The process of grading the MRIs for the study was challenging. “It took years,” said Darrow. “The graders come from different schools of thought. Dr. Haines believes in not putting all your faith in imaging vascular compression but even when it’s not there, it doesn’t mean you shouldn’t operate. Dr. Grande is a proponent of when it is there, it’s a sign you should operate. We’re trying to clarify a much more complicated discussion than exists today in the literature.”

Compression is a major factor
The traditional treatment for trigeminal neuralgia – surgically decompressing the offending branch of the trigeminal nerve — seems to help for about 60 to 65 percent of patients long term. Darrow believes that for some people, compression is a major factor in their pain. For other people, it’s not … there is something else going on. “But these things are still tied together through the trigeminal nerve system,” he said. “Because of that, there must be an intrinsic property in that system and if anything is wrong, trigeminal neuralgia occurs.”

To sort all this out, Darrow believes there are other diagnostic tools that can be used instead of MRI. “Electrophysiology that enables us to map out the trigeminal nerve system could be a promising frontier and would allow us to look at the function of the system rather than the structure,” he said. “There isn’t a lot of evidence in that area, but if the disease isn’t explained by the structure, it must be explained by the function.” He is involved in a current investigation to figure that out.

Getting back to the basics
This study made Darrow realize that he had to get back to the basics when diagnosing trigeminal neuralgia. “As much as I love imaging and electrophysiology, talking to the patient is the most important element of the diagnosis,” he said. “We need to help the patient communicate better about their condition to enable us to accurately determine the correct treatment.”