In the summer of 2017, 22-year-old Baylor University student Sami Kaiser (pictured at right with neurosurgeon Daniel Guillaume, MD, MS) was working two jobs while she was home in Minnesota, managing a local yacht club and completing a public health internship. “I was feeling super tired but didn’t think anything of it because I was working 70 to 80-hour weeks,” she said.

As the summer went on, Sami noticed additional symptoms, such as light-headedness, intense migraines, numbness and tingling. She assumed it was just fatigue. After returning to Baylor, however, Sami was hospitalized for these symptoms as well as a fast heart rate. “They told me it was just anxiety, which was frustrating,” she said. “I knew something was wrong and it wasn’t anxiety.”

Sami would see several other doctors trying to get a handle on her symptoms. One took an MRI of her brain and discovered that she had a Chiari malformation type 1, a relatively common condition in which brain tissue extends into the spinal canal putting pressure on the brain stem. “My case was too complex for the neurosurgeon I saw, so my parents and I decided it was time to come home to Minnesota,” said Sami.

At home, a family friend recommended that she go to the U of M. “She said it was an amazing place with an amazing neurosurgery department,” Sami noted.

The day before Thanksgiving of 2017, Sami saw U of M spinal neurosurgeon Kristen Jones, MD. Jones thought Daniel Guillaume, MD, MS, Director of the Pediatric Neurosurgery Department at U of M Masonic Children’s Hospital, would be a better fit for Sami’s case.

"He went above and beyond"
“Dr. Guillaume is an earth angel,” said Sami. “From the second I met him, he reassured me that everything would be okay and that he would see me through this. I can’t emphasize enough how comforting that was during such a dark time. He went above and beyond to make sure I was heard and my questions were answered.”

According to Guillaume, Sami’s case was challenging but straightforward. “Dr. Jones determined that in addition to the Chiari malformation that was pinching the back part of her spinal cord, Sami had basilar invagination,” he explained.

Basilar invagination is an in-folding of the base of the skull that occurs when the top of the C2 cervical vertebra migrates upward. It can cause narrowing of the foramen magnum (the opening in the skull where the spinal cord passes through to the brain). It also may press on and deform the lower brainstem, putting stretch on the nerves that come out of the brainstem to control swallowing and other important functions. That, plus the Chiari malformation, was causing Sami’s symptoms.

Sami's first surgery
“When Sami came in, she had had headaches, dizziness, numbness, trouble swallowing, walking, and was dropping things,” said Guillaume. “We talked with her for some time about her symptoms and the options for treating them.” He and his colleagues decided to take a more conservative approach and on December 28 performed what’s known as a Chiari decompression on Sami. They removed some bone at the back of her skull and spine to relieve pressure on the cerebellum and brain stem. Although the surgery went very well, it didn’t make as much difference for Sami as her care team had hoped.

“We thought it was the end of it, but then I started to get horrible double vision,” Sami said. “I was referred to Dr. Collin McClelland.” McClelland, of the Department of Ophthalmology and Visual Neurosciences, told Sami that she had strabismus or eye misalignment that was caused by the Chiari. On April 16, he performed Sami’s first eye surgery.

Second surgery more complex
Because her symptoms persisted following the Chiari decompression, Guillaume scheduled Sami for a more complex surgical procedure in mid-July. Unfortunately, she was riding in the family car when her father hit a deer going 60 MPH. “My dad was fine and the car was fine, but I experienced horrible neck pain,” said Sami, who ended up at the U’s emergency room. “They said I had whiplash, but I noticed my regular symptoms were worsening. I couldn’t lift up my right arm or get out of bed for more than five minutes at a time.” After a call to Guillaume, Sami’s surgery date was moved up to June 15. 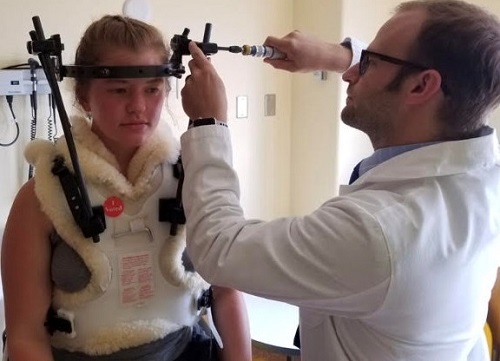 Assisted by Jones and Emiro Caicedo-Granados, MD, of the U’s Department of Otolaryngology – Head and Neck Surgery, Guillaume performed a 14-hour procedure on Sami. “We went through her nose with an endoscope and a drill and removed all the bone and soft tissue pushing on her brain stem,” said Guillaume. “But that took away much of the stability from the joint between her skull and the spine. To fix that, we flipped her over and fused the spine to her skull. Dr. Jones put screws in the bones of the spine and the skull and connected them with a rod. We then harvested some of Sami’s rib to help grow things together.”

The surgery worked. “I had no neurological symptoms, other than intense pain,” Sami said. “A couple of days later, Dr. Guillaume decided to put me in a halo brace.” Although she was supposed to recover in the hospital for two to three weeks, Sami’s first-week progress in occupational and physical therapy encouraged Guillaume to let her go home.

She would wear the halo brace for another two months. “It was hard to sleep and eat, but I knew it was necessary for my recovery,” Sami said. The halo was replaced by a cervical collar, August 15, which she wore for two months. Sami is now being weaned off wearing any brace as she continues to progress in physical therapy.

"With medicine in mind and
healthcare at heart."

As a Medical Humanities major at Baylor, one of the ideas Sami’s classes discuss is, With medicine in mind and healthcare at heart. “Dr. Guillaume is the epitome of this,” she said. “He is obviously skilled and talented, but what is more obvious is his compassionate nature and genuine desire to heal. He saved my life and I will be forever grateful.”

Interestingly, even though Sami’s basilar invagination is rare, Guillaume and his team have seen three other patients with the problem since her surgery, and all have improved with surgery. “Our team has a lot of expertise for this,” he said. “Patients who seek treatment at the U of M are at the best possible place,” added Sami. “I cannot thank everyone there enough. They have been nothing but compassionate and kind.”

If you would like more information about the U’s Pediatric Neurosurgery Department or to refer a patient, please call 612-624-6666.