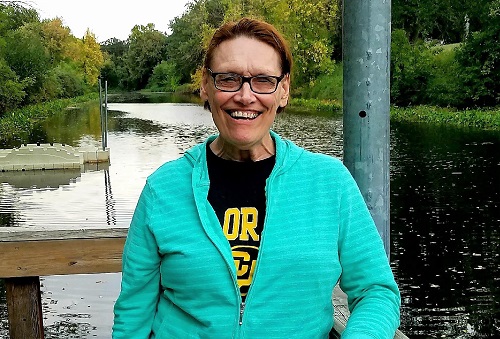 Have you ever been in constant pain and it’s getting to the point at which you can’t do the things you typically do? And no one believes that you have a problem? That’s how 64-year-old Rosseau, MN, resident, Allana Anderson Foss (pictured at right) felt about her neck pain. Until she found both belief — and relief — from U of M neurosurgeon, Kristen Jones, MD.

Alanna’s journey began in October of 2017 when she was visiting her daughter in Colorado. “I woke up with a pounding headache and my neck really hurt,” she said. “I thought I must have slept wrong.” Alanna went to the local emergency room during her visit, but “they didn’t do much,” she said.

That trip to the hospital was followed by a series of visits to several different doctors. “They tried this and that, but nothing worked,” said Alanna. “They finally referred me to a neurologist in Grand Forks, but the day before I was scheduled to go there, the nurse called and said they didn’t want to see me because the problem was too severe.”

Meanwhile, Alanna’s symptoms were getting worse. Her right hand curled up and her foot turned in. “I had what I thought were stroke symptoms from the neck down,” she said. “It was hard to do ordinary things like get in and out of bed, take a shower, and feed myself. I got to the point where I couldn’t drive, either.”

One of the abilities that was most difficult to lose made her even more determined to find a solution. “I love to embroider and one day, I couldn’t even get the needle into the cloth,” she explained. “I just sat there and sobbed.”

Alanna would eventually be referred to the Mayo Clinic but was told that she was not a candidate for surgery. Somehow, amidst all these dead-end referrals, Alanna ended up seeing Kristen Jones at the U of M. “I was lucky I found her,” she said. 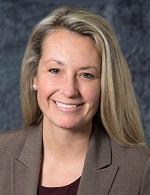 “Alanna came to us with severe neurologic impairment. She was losing the use of her right hand and could barely walk,” Jones explained. “We verified that she had severe spinal cord compression at the junction of her skull and spine. Her innate anatomy made her case quite complicated…I think that’s why she was bounced around a bit by the other physicians.

“Performing the C1-C2 fusion that Alanna required is fairly common,” Jones continued, “however, this case represented many unique challenges. It was our pleasure to help her when she hadn’t been able to find help elsewhere.”

To prepare for the procedure, Jones and her surgical team used three-dimensional computerized tomography (CT) to create a map of the bones and arteries in Alanna’s neck. “We used the scans during surgery,” Jones explained. “Everything was thoroughly planned to avoid surprises…we were ready for what we found.”

On January 2, 2018, the U of M team performed the surgery that would relieve the pressure on Alanna’s spinal cord. Jones placed screws in the first two bones of the spine to stop them from slipping back and forth, which originally caused the compression. “We removed the back half of the bone by drilling very carefully through it, being sure not to touch the spinal cord underneath,” explained Jones. Alanna’s arteries were also uniquely configured, which made screw placement and visualization of the bone challenging.

After the seven-hour surgery, Jones visited Alanna to see how she was doing. “She came into the ICU with another surgeon and asked me to open my hand and I could,” exclaimed Alanna. “Then she asked me to raise my right arm and I raised both. Dr. Jones gave me a high five and said, ‘You beat the odds, girl.’ I just started crying. It was a miracle.”

Dr. Jones gave me a high five and said, ‘You beat the odds, girl.’ I just started crying. It was a miracle.”

After spending a few days in the hospital, Alanna began the work of recovering. “I was told that rehab might take as long as six months,” she said. “I worked hard and was done in a week.” Alanna noted that during her recent six-month checkup, “Dr. Jones said that I was much stronger, and my X-rays looked good. I’ve been doing physical therapy and she told me to continue it.”

A hand-written thank you note
Jones was impressed with Alanna’s progress. “One of the first things she did when she came back to see me was very kind,” Jones said. “She wrote me a thank-you letter in her own handwriting. It was remarkable that she could already do that. She can also walk now without assistance. Looking at her, you would never know how disabled she’d been or what she’s been through. She’s worked hard to get this far.”

Alanna feels that she owes it all to her surgeon. “To me she’s up there with God, to tell you the truth,” she said, laughing. “I can’t say enough about her. I think she is really good at what she does, and I’m tickled I fell into her hands.”

For other people struggling to be believed about their medical condition, Alanna advises them to take matters into their own hands. “If your physician seems like they can’t help you, find someone else,” she said. “You can’t just stop and give up. If I’d waited any longer, I probably wouldn’t be talking to you now.”

It’s not unusual for providers to be confronted with complicated cases such as Alanna’s and not know what to do. “You don’t know what you don’t know,” said Jones. “And you may not be sure how to get answers to your questions. That’s a good reason to refer a complex spine case on. We’re happy to provide an opinion and try to get patients the help they need.”