On July 11, 2019, two-month-old Colton Fearing underwent a unique endoscopic procedure to correct what’s known as scaphocephaly – an uncharacteristically long, narrow head. The condition was caused by the fusion of his sagittal suture, which is located on the top of the head, running from the soft spot to the back of the skull. If not surgically released, the fused suture could create several neurological issues.

Because of his age, Colton qualified for an endoscopic procedure, rather than a much larger, more involved surgery. His care team – pediatric neurosurgeon Carolina Sandoval, MD, U of M Masonic Children’s Hospital; and plastic surgeon Jo Barta, MD, Gillette Children’s Hospital – are specially trained to perform this procedure. They were assisted by pediatric neurosurgery resident, Bryan Ladd, MD.

Procedure's advantages
The procedure went well and there were no complications, according to Sandoval. “The biggest advantage of doing it endoscopically is reduced operative time and avoiding many of the risks of a larger surgery, including the need for blood transfusions,” she said. “We hope to do more of this type of procedure in the future.”

Colton was a trooper throughout it all. “Originally, we were told we would be in the hospital three to five days,” said his mom, Cassie. “They told us we could head out on day three. It was a lot easier and less stressful than I thought it would be.”

There is one condition that comes with the endoscopic procedure – Colton will have to wear a helmet until the skull reshaping process is complete. Getting him fitted for his first one was quite a process.

Fitted for his helmet
Colton was taken to an orthotist – someone who makes and fits braces, helmets and splints for people who need added support for body parts that have been weakened by injury, disease or disorders of the nerves, muscles or bones. To begin the fitting process, the orthotist put a nylon cap on Colton’s head. “Then he put several reflective dots on his body, including the top of his head, his forehead and over both ears,” Cassie explained. “After the dots were in place, he used a scanner to create a 3D image of Colton’s head. It was really neat.” 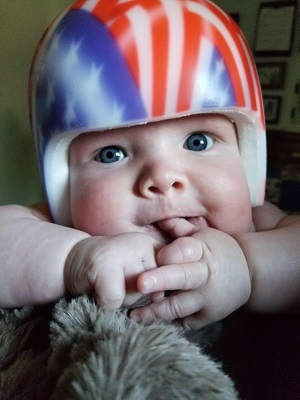 The helmet was built based on that scan. Because Cassie and Colton’s dad, Mike, love the Fourth of July, they chose a flag-based design for his first helmet. Later this year, they plan on having one wrapped to look like a hockey helmet, as Mike is a big Minnesota Wild fan.

Getting used to it
Colton and his family are just now getting used to his helmet. “He’s doing great,” said Cassie, who admits to having more trouble adjusting than Colton is. “The first day, he wasn’t sure about it because he had to wear it for an hour on and an hour off. Then he had a little heat rash that required keeping it off him for a couple of days and we had to take him in for an adjustment.”

Helmet adjustments must be made relatively often to accommodate the baby’s growth. “What you watch for are red spots, which could be indications that the helmet needs to be adjusted,” explained Cassie.

Colton must wear his helmet a total of 23 hours a day. “The helmet is bigger than I anticipated,” said Cassie. “You have to give him a little space to avoid getting bonked by it. Like any change, it’s going to take some time to get used to.”

Expanding clinic options
Sandoval is thrilled with Colton’s progress and his speedy recovery from the endoscopic procedure. She and her team are happy to offer this option to parents like Cassie and Mike. She noted that the Craniofacial Clinic is expanding its available clinics to other sites in the metro area and including evaluation for nonsurgical cranial deformities.

“We’re working with physical therapy, orthotics, and our nurse practitioners to include the whole spectrum of cranial abnormalities, from complex syndromic cases to conditions such as positional plagiocephaly,” Sandoval explained. “We’ve created a comprehensive Craniofacial Clinic that offers a wide range of options for parents.”