In the United States, Parkinson’s disease occurs in approximately 13 out of 100,000 people, and about 60,000 new cases are identified each year (source: U.S. National Library of Medicine). It affects more than 1 million people in North America and more than 4 million people worldwide.

“Parkinson’s disease is caused by the loss of dopamine-producing cells in the part of your brain that manages movement,” explained neurosurgeon and MnDRIVE Neuromodulation Scholar Michael C. Park (pictured second from left at right), MD, PhD, U of M Department of Neurosurgery and Neurology. Dopamine is a neurotransmitter used as a signaler between neurons, some of which control movement. Its loss can result in symptoms such as tremors, slowness, stiffness, and abnormal gait.

Using DBS to treat symptoms
Park specializes in deep brain stimulation (DBS), a surgical procedure that helps reduce Parkinson’s symptoms (the disease itself cannot currently be cured). It has only been since 2002 that DBS for the treatment of Parkinson’s disease was granted approval by the U.S. Food and Drug Administration.  Subsequently, the use of DBS has become more common.  And in recent years, stimulation systems that can be implanted have become more numerous (Park noted that there are now three options, made by Medtronic, Abbott and Boston Scientific).

Treatment for Parkinson’s disease may start with lifestyle changes, such as exercise and physical therapy. Often, the patient is given medication that provides dopamine to the brain. If the standard medication initially controls their symptoms but eventually fails or causes excessive side effects, Parkinson’s patients could become candidates for DBS.

Vetting the candidate
To qualify, the patient’s diagnosis must be confirmed as Parkinson’s and their overall health should be good enough to get them through the surgery successfully. They must also not have dementia or Alzheimer’s disease. “DBS candidates should have good cognitive understanding of what will happen throughout the process,” explained Park.

The patient’s brain should also be adequate for DBS implantation. “It should have reasonable anatomical structures in which to implant the electrodes,” Park said. “We want to make sure we can provide relief through the stimulation with minimal risk to the patient.” 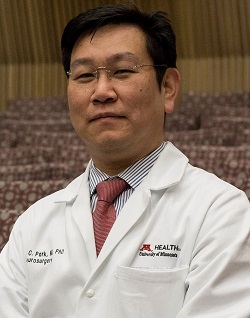 Picking a stimulation target
When a DBS candidate has been thoroughly vetted, their movements are videotaped and imaging studies are completed and evaluated. This will help the neurologist and neurosurgeon decide which target in the brain will give the patient the most symptom relief, Park explained. In general, for patients whose tremors are the dominant symptom, the subthalamic nucleus or the ventral intermediate nucleus of the thalamus would be possible targets. With stiffness, freezing, and abrupt movements, the target may be the global pallidus internus.

Finally, as part of the Movement Disorder Consensus Group at the U of M, which includes neurologists, neurosurgeon, neuropsychologist, electrophysiologist, movement disorder nurse practitioner, nurse coordinators, and associated care providers, Park would choose the most appropriate target and the best stimulation device/system to implant.

The surgery
DBS surgery is separated into two parts. During the first procedure, which takes about five hours, the DBS electrode is implanted in the patient’s brain (the patient is awake during a specific part of the procedure, which might seem scary; however, the brain has no pain receptors, thus the patient feels no pain).

To start, the patient’s head is stabilized with a stereotactic head frame and images are obtained to correctly align the brain and the stimulation target. The patient is then positioned and sedated. Park makes a small incision on the appropriate side of the head – stimulation of the left side of the brain provides symptom control on the right side of the body, Park explained. He drills a small hole through the skull. At this point, the patient is awakened.

“We insert a very fine electrode into the targeted area of the brain while the patient is awake and specific neurological tests are performed,” Park said. “The neurologist and electrophysiologists who are a vital part of the surgery map out where in the brain we are, collect data from the recording electrodes, and identify the ideal location for the DBS electrode.” Then, the electrode is implanted. 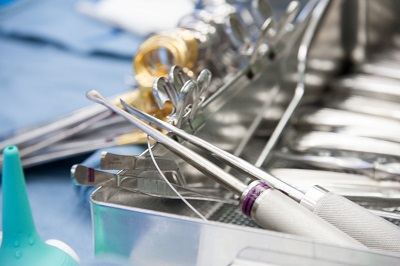 About a week later, the patient comes back for the second procedure, which is performed under general anesthesia. Park and his team insert the generator/battery (often referred to as the pacemaker for the brain) at the patient’s chest wall under the skin. They will then connect it to the electrode in the brain. “The patient goes home the same day,” Park said. “About a month later, they will go to the neurologist for DBS system testing, programming and activation.”

Education is vital
It’s important, according to Park, to educate patients and their families before they go through the DBS procedure. Care Coordinator Karen Ellis, RN, Neurosurgery Department; and Deep Brain Stimulation Program Manager Susan Vold, BSN, RN, PHN, HNB-BC; and Research Nurse Kelly Sovell, RN, MPH, AHN-BC, of the Neurology Department, provide a DBS class for patients and families that, according to Park, is very popular. “Keeping the number of participants small makes the class extremely personal and hands-on,” he said. “The class gives participants a deeper knowledge about the surgery and the entire treatment process.”

After they’ve had the surgery, how do patients react? Park said his patients tell him...

"I wish I had done this sooner"

"It turned out a lot better than I expected"

…and in cases where the patient has bilateral issues, "When can I get my second side done?"

Be your own advocate
Parkinson’s sufferers interested in deep brain stimulation should be their own advocates. “Be aware that some neurologists may not offer DBS as an option,” said Park. It’s also important to investigate where the procedure will be performed, how experienced the neurosurgeons are with the procedure, and if there are options for the different kinds of system to be implanted (not all neurosurgeons offer all three device systems).

Why wouldn’t patients have the procedure? Well, it’s brain surgery. “One of the biggest hurdles is that patients are afraid of the procedure,” Park explained. “The risk is reasonable if you’re in good health and the efficacy is high with the correct diagnosis and target selection.”