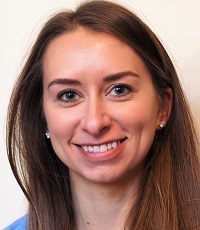 Bard is a certified physician assistant who joined the M Health stroke team in October 2018. In addition to seeing patients at Fairview Southdale Hospital, a comprehensive stroke center, she helps support stroke patients remotely. “I work with the telestroke program to evaluate patients and provide specialist care, while they remain at their local Fairview hospital,” she said. “Telemedicine and telestroke are important because they prevent unnecessary transfers and allow patients to stay in their own communities with their families.”

The M Health telestroke program currently provides emergent stroke care at Fairview Ridges Hospital, Southdale, and Grand Itasca. In addition, Bard provides inpatient consultation for patients at Ridges with stroke and transient ischemic attack (TIA). “I complete a comprehensive stroke workup for these patients and determine what medications can be changed to decrease the likelihood of future stroke,” said Bard.

When she is working remotely with patients, Bard uses a telemedicine workstation, which has three computer monitors for simultaneously videoconferencing with the patient, while also viewing their neuroimaging and medical record. “At Ridges, the nurse brings the telestroke cart into the patient’s room,” she noted. “It’s set up at the foot of their bed and I can move the camera for better access, such as zooming in to see the patient’s eye movements. The patient’s bedside nurse helps me with aspects of the physical exam.”

Before accepting this new role, Bard spent five years working in general and stroke neurology, and two years in neurocritical care. “I gained lots of stroke experience and wanted a job that focused more on those patients,” she said. “This position was the most unique that I found – it’s not being done elsewhere. It’s a chance to make a major difference in outcomes. Patients with stroke or TIA are at high risk of stroke recurrence. By accurately identifying critical stroke risk factors, we can prevent that recurrence.”

Bard likes the detective work that comes with neurology. “I also like that I have more of an educational role with patients,” she said. “Much of what I do in telestroke is counseling, explaining risk factors and signs of strokes to patients and their families. I like educating people about their health and breaking things down, so they can understand and enact change.”

Bard became certified as a Spanish medical interpreter while in college and spent several years using that skill as a volunteer in clinics. “It helped me see when patients weren’t understanding something … how they looked, what they asked.” Bard identifies these mannerisms in non-Spanish speakers as well. “These visual and verbal cues help me identify when patients don’t comprehend what we’re telling them, which they often won’t say directly,” she explained.

There are a few challenges with her new role. “It’s not as easy to build rapport and trust with a patient when you aren’t with them face to face,” said Bard. “Inpatient telestroke is uncommon and there’s not really an established model for how it should work.” She looks forward to the challenge, though.

Bard currently lives in Edina, MN. Her undergraduate degree is in biology and Spanish, and she attended PA school at Lock Haven University in Pennsylvania, where she grew up. In her spare time, she likes to travel, play guitar, and spend time with her Brittany Spaniel, Tippet. 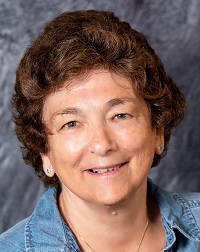 Messer was recently officially hired by the Neurosurgery Department after having been on a contract for 10 months. She has more than 20 years’ nursing experience and earned her BSN at Montana State University in Bozeman. Most recently, she worked for 15 years managing a cardiology clinic at Baylor Medical Center in Dallas, TX.

Messer supports neurosurgeons Andrew Grande, MD; and Stephen Haines, MD; and nurse practitioner Christina Ritter, DNP, FNP-BC, at the U’s Clinics and Surgery Center. Her new role gives her the opportunity “to work with forward-thinking physicians involved in research and new ways of working out healthcare issues,” she said. “A lot of what they do in their labs comes to fruition in their daily work.”

The challenge for Messer, who spent most of her career in cardiology, has been to understand neurosurgery procedures, medications, and the healthcare needs of neurosurgery patients. “I like working with them in the clinical setting, coaching, teaching, empowering them to help themselves,” she said. Messer was surprised by “just how much neurosurgery there is, how diverse it is. You go from the nerves to the endovascular system and the spine to tumors and congenital deformities,” she explained.

“I was also surprised at the job fit and am enjoying the opportunity to learn another specialty,” Messer added. “I like working with the physicians and the other nursing staff. They’re a great group who work together well as a team.”

Messer returned to the Twin Cities (she grew up in St. Paul) to be with her father, who is almost 94. She had moved to Texas right after college and still has two adult children there. In her spare time, Messer likes to swim, ride bikes, and go for walks. She hopes to start ice skating this winter. 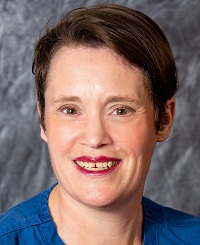 James also worked on a contract with the Neurosurgery Department before being officially hired. Just before joining the department, she completed 14 weeks as a travel nurse in Anchorage, AK.

After earning her BS in Nursing from the U of M (her second bachelor’s degree), James worked at Regions Hospital in St. Paul and at North Memorial Health Hospital in Robbinsdale, MN. She earned her first bachelor’s in Television, Radio and Film at S.I. Newhouse School of Public Communications of Syracuse University in New York. James then worked in the film industry in Los Angeles for a few years.

She has enjoyed the challenge of working in a new type of role (as a clinic nurse) and in a new specialty. “I really like helping our patients navigate our challenging healthcare system and getting answers to their questions,” James said. Getting up to speed on everything required some teamwork. “I have great coworkers who were willing to teach me,” she noted.

James supports neurosurgeons Kristen Jones, MD; and Ramu Tummala, MD, at the U's Clinics and Surgery Center. “I’ve gotten to the point where I’m able to anticipate what they need and want,” she said. James also likes working where there is cutting-edge technology. “There is always something new to learn here and the doctors are at the top of their field,” she said.

When James has spare time, she likes to dance, ride horses, play the guitar, and interact with her cat and three dogs.