These days, smartphone applications invite ordinary citizens to become research assistants by mapping neurons, studying phytoplankton, or documenting wildlife. Researchers at the University of Minnesota Neurosurgery Department are harnessing that trend by using epidural stimulation and a HIPAA-compliant game to help spinal cord injury patients who are unable to move their legs.

Their goal is twofold: use epidural stimulation to potentially help these patients regain some volitional (voluntary) movement and engage them via the game to help determine optimal settings for the stimulator itself. “The problem is there are more than 40 million different settings on the stimulator,” said lead investigator David Darrow, MD, MPH, a fourth-year neurosurgery resident at the U of M. “It would take an eternity to discover which are good and which aren’t one by one.”

Under the auspices of the FDA-approved E-STAND (Epidural Stimulation After Neurologic Damage) Phase II Clinical Trial, Darrow, with help from fellow resident Bryan Ladd, MD, created a tablet-based Android game that will enable participants to document which settings for their implanted spinal cord stimulators help them regain voluntary movement. 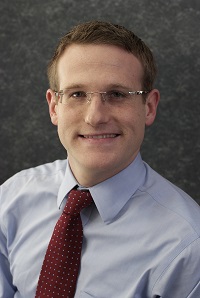 Over the 13 months that they’re enrolled in the study, patients will first be implanted with a stimulator. They will then begin testing stimulator settings one by one – about 200 unique settings in all. For example, participants might be asked to move their right foot. “They’ll move their foot or leg while they’re lying down,” Darrow (pictured at left) explained. “We look at reaction time and the fidelity at which they move — did they move the left when they should have moved the right? We’ll look at these things thousands and thousands of times to see which settings are optimal.” Data will be transmitted from the tablet and uploaded every few days to a HIPAA-compliant server.

University faculty mentorship and stimulator implantation surgery is provided by Uzma Samadani, MD, PhD (at HCMC); Michael Park, MD, PhD (at University of Minnesota Medical Center-UMMC); and Ann Parr, MD, PhD (at UMMC and the Minneapolis Veterans Affairs Medical Center). With current funding, six patients each will be implanted at HCMC and the VA. “We will use the preliminary results to apply for additional funding,” said Darrow. “We hope to eventually enroll a total of 100.”

The E-STAND team is building on work done in a 2008 study at the University of Louisville (KY) and the University of California, Los Angeles. Study participants had multi-electrode leads implanted in their spinal column and connected to a stimulator placed lower in their body. “The study’s objective was to see if this type of stimulation could help these patients walk again,” said Darrow, who attended a presentation about the original study in 2015. The results were astonishing, he noted.

“In contrast to just finding improved walking, they were surprised to find that the first patient could voluntarily move his leg – a major discovery,” Darrow explained, adding, “We believe that when you turn on the current, it improves the signal-to-noise ratio of the brain signals still trying to communicate with nerves in the spinal cord, helping some of the overly excited nerves that regulate movement settle down. It allows your body to better interpret the signals. You may have lost 99 percent of the nerve fibers through the injury, but a few still get through. No one knows how extensive the return of function will be, which was part of the problem when I saw the presentation in 2015.”

That’s one of the challenges faced by the E-STAND team. “There are questions about what the epidural stimulation actually does for patients,” said Darrow. “We’re focused on volitional movement, but the preliminary data shows that it also changes autonomic function, potentially augmenting cardiovascular, bowel, or bladder function. I am not sure if patients will regain the ability to walk, but if they didn’t have to use a urinary catheter anymore and had improved bowel function, that would completely change their lives. There isn’t any data that supports this, but it’s a big part of our trial.”

Darrow added that collaborators from the University of British Columbia will come down for patients with autonomic dysfunction and test them with the stimulator settings. “They will do it three times for every patient with conditions such as autonomic dysreflexia,” he noted. “If these patients sit up, for example, their blood pressure and heart rate can surge and potentially cause a stroke. They can also have low blood pressure, which affects their balance and ability to think. In the few patients who’ve had it, the implant seems to greatly improve these things.”

E-STAND participants have begun to be prescreened via the trial website. “If they pass the online pre-screening, we do an exam to determine their eligibility for the trial,” Darrow said. “We evaluate the injury, assessing full upper body strength, overall health, whether they will do okay in surgery, and if they are willing to participate, given the requirements.”

If you have any questions about the E-STAND trial or want to participate, more information can be found here.