Chairman of the U’s Neurosurgery Department from 1974 to 1989, Shelley Nien-chun Chou, MD, PhD, was a man of remarkable achievements, which was even more amazing considering his humble beginnings. In 1924, he was born in a small village in China into a family that placed great emphasis on education. At a time when 95 percent of the people in his region of China were illiterate, his father — who died early in Dr. Chou’s life — named him after the poet Percy Bysshe Shelley.

To ensure that the family’s children would continue to be educated, his grandfather hired tutors to teach them in various subjects, including English. After Dr. Chou had begun his formal education, World War II curtailed its completion. With his acquired fluency in English, however, he was befriended by a variety of Western contacts who influenced his decision after the war to emigrate to the United States, which he did with his family in 1948. 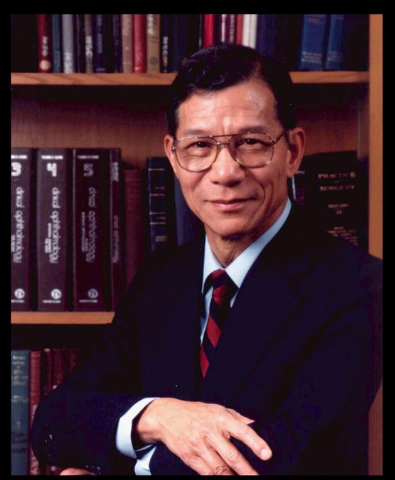 A neurosurgical pioneer
Dr. Chou's contributions to neurosurgery were prolific, including pioneering research in brain scanning, in addition to major clinical contributions in cerebrovascular and spinal surgery. In a 2014 article titled, 75 Years of Neurosurgery at the University of Minnesota, co-authored by Professor Emeritus and former Department Head Dr. Stephen Haines, it was noted that, “Some of the first transthoracic repairs of spinal deformity and fracture were developed by Shelley Chou as part of a complex multidisciplinary team effort.”

In addition, the article continued, Dr. Chou’s seminal contributions to the understanding of brain death resulted in his appointment as a consultant to the President's Commission on Brain Death. He also served as president of several national neurosurgical organizations.

Deep interest in education
Perhaps his greatest contribution was his deep interest in graduate neurosurgical education, particularly involving the American Board of Neurological Surgery and Residency Review Committee, where his influence will continue to be felt for many years to come.

Dr. Chou stepped down from the chairmanship in 1989, handing on “a department with a strong record of producing academic neurosurgeons and leaders of community neurosurgeons, presidents of national neurosurgical societies, and many professors and leaders of some of the finest private practices of neurosurgery in the country.”1

An esteemed leader
The esteem with which he was held by his colleagues at Minnesota and the wide respect for his leadership ability became obvious when, after the resignations of the Dean of the Medical School and of the Vice President for Health Sciences, Dr. Chou became the unanimous choice of the Clinical and Basic Science faculties to become the Interim Dean of the Medical School and Vice President for Medical Affairs – after he had already retired.

When he did finally retire, Dr. Chou found more time to enjoy the desert southwest during the winters with his wife, Jolene.

While Dr. Chou passed away in July of 2001, his legacy lives on in the Shelley N. Chou Lectureship, which focuses on impactful research by a recognized neurosurgeon and provides a forum to foster meaningful discussion about potential clinical applications of current advances in neuroscience, neurosurgery, and other fields of inquiry. He and his wife endowed the Shelley and Jolene Chou Nursing Award, which is given annually to a neurosurgical nurse at the University of Minnesota Medical Center who exemplifies the highest traditions of nursing care. Finally, he endowed the Zhou Zi Zhen Award honoring his mother, which is given to a resident in the U’s Neurosurgery Residency Program who exemplifies the highest standards of patient care, continual learning, and academic achievement.

Skilled neurosurgeon, inventive researcher, inspiring teacher, and distinguished leader — Dr. Chou is all these things – and the U’s Neurosurgery Department wouldn’t be what it is today without him.

For a more intimate look at this inspiring leader, his U of M colleague, Edward L. Seljeskog, MD, PhD, interviewed him in this 2015 American Association of Neurological Surgeons video.