Seven-year-old Jazmine Anderson of Bismarck, ND, is the type of child who once inspired her elementary school principal to tell her, “Don’t let anyone dull your sparkle.” She is a “whirling dervish” and sharp as a tack, according to Kathy Sommer, MS, RN, Jazmine’s Care Coordinator at University of Minnesota Health (M Health).

Sommer sees Jazmine on a regular basis. The little girl was born with a genetic condition called neurofibromatosis 1 (NF1). According to Sommer, it means that a gene on Jazmine’s 17th chromosome – neurofibromin – is defective. When operating normally, neurofibromin regulates bone formation, growth, and repair. It also suppresses the growth of tumors. In Jazmine’s case, its ability to do these things is compromised.

First signs
When Jazmine came into the care of her then foster mother, Melissa Anderson, she noticed that the six-and-a-half-month old had telltale café au lait spots on her legs and abdomen. A pediatrician recognized the spots as a symptom of NF1. To monitor any potential tumor growth, Jazmine had a baseline MRI when she was two. “Before we even left the hospital, our pediatrician called to say that she had bilateral optic gliomas,” Melissa said.

An optic nerve glioma (also called an optic pathway glioma) is a slow-growing brain tumor that arises in or around the optic nerve, which connects the eye to the brain. It typically occurs in children under the age of 10. As the tumor progresses, it presses on the optic nerve, causing a child’s vision to worsen.

To treat her gliomas, Jazmine’s pediatrician recommended that she be taken to the University of Minnesota Masonic Children’s Hospital and into the care of pediatric oncologist and NF program director Christopher Moertel, MD. “We made an appointment to meet the team in Minnesota in January of 2014,” Melissa said. “At that point, the decision was made to simply wait and watch for tumor growth.”

Adoption day!
A month later, Melissa and her husband, Justin, would officially adopt Jazmine on Valentine’s Day. “She’s thriving in her home environment,” noted Pediatric Neurosurgery Nurse Practitioner Leah Kann, who is also part of Jazmine’s M Health care team. “Melissa and Justin have all these wonderful kids. They have such big hearts and Jazmine really benefits from it.”

She would need all the support she could get. The MRI also revealed that Jazmine had a Chiari malformation, which isn’t unusual with NF1 patients. It is a condition in which brain tissue extends into the spinal canal. The skull is abnormally small or misshapen and presses on the brain, forcing it downward. It was giving Jazmine painful headaches and if left untreated could have caused several other neurological problems. “We met with Dr. [Daniel] Guillaume [of Pediatric Neurosurgery] to discuss our options,” said Melissa. “He recommended doing a surgical decompression, which we scheduled for March 2014.” 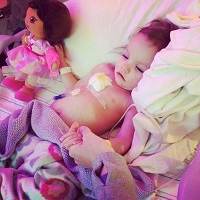 Unfortunately, when the family returned to the U of M for the procedure, Jazmine’s optic tumors had progressed to the point of affecting her vision. The decision was made to delay the decompression surgery so she could start chemotherapy to reduce the pressure on her optic nerves. Since that time, Jazmine has been on chemotherapy regimens four times and is currently receiving  an oral anti-tumor medication that has shown promise in treating optic pathway gliomas in childen with NF1.

In March of 2017, “she was finally able to have the decompression surgery with Dr. Guillaume,” Melissa said. She also needed to be treated for another condition, known as hydrocephalus. “We saw that the Chiari was obstructing the flow of cerebrospinal fluid, which caused the hydrocephalus,” explained Kann. Jazmine would undergo a couple of surgeries to address the condition’s symptoms. Unfortunately, neither worked.

Hydrocephalus treated
Then in January of 2018, Guillaume performed a septum pellucidotomy on Jazmine to help treat her hydrocephalus. This is a procedure in which a portion of the septum pellucidum – a thin, almost transparent membrane that runs down the middle of the brain from the corpus callosum to the area of a large fiber bundle called the fornix – is removed. “It enabled everything to communicate again to drain the ventricular system,” noted Kann. “Jazmine hasn’t needed any revisions since. Her headaches are better and she’s feeling more like a normal seven-year-old.”

Currently, Jazmine is “doing great,” according to Melissa. “She’s been through so much, but you really wouldn’t know it. She's been a fighter from day one. Her spunky personality and sweet smile are infectious.”

The lifetime nature of NF1 means that Jazmine needs to return to the U of M regularly. Sommer coordinates her appointments. “Part of my role is educating the patient and their family about their condition, the follow-up requirements, and to be available for questions and concerns, taking those panicky calls and trying to prevent everyone from getting super stressed,” she explained.

“NF1 is so variable, you just don’t know what to expect,” Melissa added. “There is such a wide range of effects it can have on a child.” In addition to everything else she has been and is being treated for, Jazmine has ADHD (attention deficit/hyperactivity disorder), which is “staggeringly common” in NF1 patients, according to Sommer. She is also being seen by a cardiologist in Bismarck, as her oral medication can cause heart problems.

Connect with others
Melissa advises other parents with NF1 children to take it one day at a time. “It can be so overwhelming... you need to break it down to get through it. It can also be a very isolating journey at times,” she said. “Some people are scared off by the complexity of our lives or don't understand. It helps to seek out other parents with NF1 kids and to connect with support groups ... other people you can relate with or vent to. People who get it.”

As a precocious seven-year-old, Jazmine is aware of her conditions. “It’s part of our daily life,” Melissa said. “There are times in school when she feels icky or ‘off.’ She'll take some time to herself and her teacher will let me know if she needs to come home. She knows she’s different in that sense, but she deals with it very well.”

Sommer agrees. “Jazmine is so loving and so sweet,” she said. “It’s been so much fun to watch her grow up and see her thrive.”

For more information about M Health’s neurofibromatosis program, you can contact Kathy Sommer at ksommer10@umphysicians.umn.edu, or call 612-365-8100 to schedule an appointment.