When Ibrahim Ali was born on July 1, 2020, his parents Egal Abdi and Amal Mohamoud of Eagan, MN, noticed that his eyes always looked down and that he was making unusual noises at night. The week after his birth, Egal and Amal took Ibrahim in for a checkup with pediatrician David Yehl, MD, at M Health Fairview’s clinic in Eagan, MN. “Dr. Yehl noticed that his head size was unusual,” said Egal. “He didn’t say anything specific but asked us to come back in a week for a weight check and a head circumference measurement.”

It was during the second appointment that Dr. Yehl ordered an ultrasound of Ibrahim’s head because he was concerned there was too much fluid on his brain, according to Egal. On July 20, 2021, Egal and Amal took Ibrahim in for the ultrasound.

“On the way home from the appointment, they called us and said that Ibrahim had a condition known as severe ventriculomegaly,” said Amal. (This is a brain condition that mainly occurs in the fetus when the fluid-filled lateral ventricles in the brain become dilated.) “They told us that tomorrow, July 21st, we would meet with Dr. [Carolina] Sandoval because there was an urgent surgery that needed to be done.”

Trip to the ER 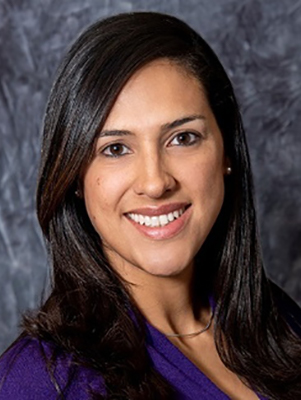 That night, Ibrahim began exhibiting alarming symptoms that his parents were told to watch for, and they took him into the emergency room. After an overnight stay, Egal and Amal met with Dr. Sandoval (pictured here) to discuss what would happen next.

She confirmed that Ibrahim had severe hydrocephalus, a condition in which fluid accumulates in the ventricles of the brain and has nowhere to go. “Sometimes, there is a slow, relentless progression with hydrocephalus; other times, the symptoms become more apparent overnight,” said Dr. Sandoval. “It seems like that’s what happened with Ibrahim.”

Her main concern was that Ibrahim’s ventricular spaces seemed to have some scarring. “We also had to decide whether or not more than one shunt was needed to connect the cavities in his ventricles,” said Dr. Sandoval. She was prepared to go in with an endoscope to assess the situation. “I wanted to see if I could make the connections required to create one big cavity so one catheter would be sufficient to drain the entire system,” she said.

Successful surgery
Ibrahim’s surgery went well. “We encountered no complications and the scars and bands we saw on the ventricles were mild,” said Dr. Sandoval. “All of the spaces were connected, so we placed one catheter in the lateral ventricle connected to a valve and a distal catheter that goes into the belly.” Doing so enables the excess fluid to be moved from the ventricles in the brain to the new location in the abdominal cavity where it is absorbed by the body.

“I remember vividly that Dr. Sandoval didn't come out right away during the surgery to explain how things were going,” said Egal. “She told us that she wanted us to have all the information, instead of giving it to us in bits and pieces. We were excited and happy to learn that everything went well.”

After Ibrahim left the hospital, he quickly recovered from the surgery and his eyes were tracking normally. “Because of the initial issue with his eyes, Dr. Sandoval suggested that we take Ibrahim to the ophthalmologist,” said Egal. “Fortunately, everything was okay.” 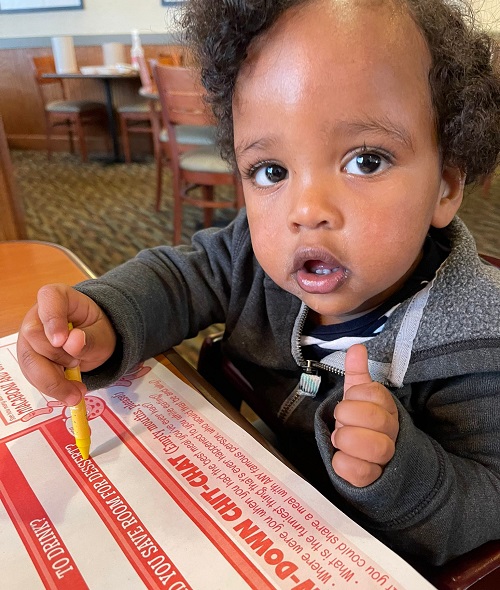 Ibrahim (pictured here) has been developing as expected since his surgery. “He’s moving his hands and legs normally; he plays with his sisters,” said Amal. “Thank God It doesn’t look like there is any long-term effect – there isn’t anything that’s suspicious.”

The timing of the operation gave Ibrahim the chance to recover. “The brain has a remarkable ability to expand and catch up when the ventricles are no longer taking all the available space,” said Dr. Sandoval. “His postoperative MRI looks quite good and clinically, he seems to be thriving. He’s moving symmetrically and is very active and alert.”

As a result of Ibrahim’s start in life, Amal and Egal are paying close attention to him. “We ask ourselves how we missed this at first,” said Egal “Initially, we thought there was something weird about his head, but we dismissed it. As a parent, you don’t want to look at your child differently, so you block the part of your brain that’s asking the questions.”

Finding resources
Egal and Amal are grateful for the resources that Dr. Sandoval’s team suggested to help them learn about Ibrahim’s condition. Amal also appreciated being able to call the nurse to ask questions. “It’s important to double check that you’re not dismissing things,” she said. Thanks to the team’s advice, they found a hydrocephalus support group through the county in which they live. “When the parents are open to it, we help them find other families who want to share their own journeys with hydrocephalus,” said Dr. Sandoval. “It really does make a difference.”

One of the complicating factors for Amal is that she grew up in Saudi Arabia and doesn’t speak English well. That made it important for her to have a translator in the room when meeting with Ibrahim’s healthcare providers. “We have excellent interpreters with great availability; however, there is always a concern about what might be lost in translation,” said Dr. Sandoval. “The patient/doctor relationship is different as a result. We must make the extra effort to create the connection and to make sure the families feel their questions are answered.”

Doing what’s best for the child
Egal, who is originally from Somalia and has been in the United States for many years, was good at bridging any gaps in information, according to Dr. Sandoval. “A lot of times, there are interesting nuances related to decision making and the understanding of certain conditions that are led by the family’s cultural background,” she said. “That’s important to consider when working with multicultural families. We all want to be on board with doing what’s best for the child.”

Egal noted that because of the history of bad encounters with the medical profession, a lot of people in their community often have difficulty trusting doctors and that impacts how they may react to a child’s illness. “They feel their child is different and may opt not to deal with it,” he said. “My wife is more open-minded and looks at doctors differently. We feel that it’s best to enrich ourselves with information to help deal with our child’s situation.”

Educate yourself
Both Amal and Egal emphasized that, “If your child is diagnosed with a condition or has surgery that might make them different from other children, it doesn’t make them less normal. You just need to educate yourself and learn to deal with their condition just like we learned to raise children without it.”

They relied on their Muslim faith to help them support Ibrahim. “We believe that nothing will happen to us except what Allah has decreed,” said Egal and Amal. “He is our protector.”