Sometimes, it takes determination and persistence to get your child what they need. Autumn Lyons of Sturgis, SD, discovered that as she tried to get medical help for her nine-year-old daughter, Mallory.

“It started March 26, 2019, when she complained of a headache,” Autumn said. “The next day, she got a stomachache, so I made an appointment with her pediatrician. She ordered an X-ray and decided it was the worst case of constipation she’d ever seen in her life and prescribed X-lax. I wasn’t happy with the diagnosis or the treatment.”

The next day, Mallory began vomiting everything, including water. Autumn called the clinic nurse and was told to give Mallory a “warm bath and keep pushing fluids.” When on a subsequent call, Autumn was told to “take Mallory for a walk,” she took her daughter to an emergency room instead because she was concerned about dehydration.

Mass found in her brain
Mallory had another X-ray in the ER that determined she didn’t have constipation at all. The next day, she started having trouble walking. When Autumn took her in to see another pediatrician, an MRI was ordered, and a large mass was found in Mallory’s brain. She was sent immediately to the emergency room.

“The ER doctor said we needed to get her to a facility that could handle her condition,” said Autumn. “I looked at her and said, ‘If this was your daughter, what would you do?’ She said she’d take her to the University of Minnesota.” Autumn and Mallory were air lifted to Minneapolis and into the care of pediatric neurosurgeon Carolina Sandoval, MD, at University of Minnesota Masonic Children’s Hospital.

Hemorrhagic stroke
Sandoval determined that Mallory had an intracranial bleed or what is known as a hemorrhagic stroke. An additional MRI was ordered, and it suggested that the stroke occurred after a cavernous mass – a tangle of small blood vessels in the brain – ruptured and began bleeding. The resulting clot causing Mallory’s symptoms was in a challenging area of her brain. This condition is rare in the adult population and even more so for a pediatric patient.

“It was deep in the middle of Mallory’s brainstem on an area called the pons,” Sandoval explained. “It’s a small, narrow region with several nucleus for vital functions. It’s also where many fibers from the upper brain converge to go down to the lower brainstem and spinal cord. Numerous functions are controlled from there, which makes it a challenging area upon which to operate and as a result, the area cannot tolerate the sudden impact of a blood clot.” 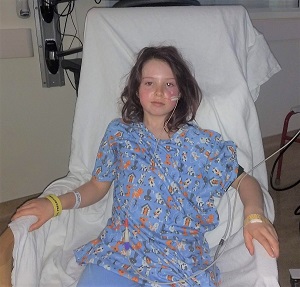 When Mallory was admitted to U of M, she was intubated and had weakness on the right side of her body that had worsened since her evaluation at the other hospital. Sandoval needed to remove the clot. “We went in through the back of the skull and via a suboccipital bony opening, we performed a hemorrhage evacuation,” she explained.

Colleague consulted
Because of the rarity of the condition in a patient Mallory’s age, Sandoval called cerebrovascular specialist Andrew Grande, MD, to evaluate the case “I asked for Dr. Grande’s opinion and insight to help make sure we did the right thing,” she said.

“The first few days in the ICU, they would bring her in and out, checking her reflexes and other physical reactions,” said Autumn. “At first, she had no movement on her right side and facial droop on the other. The third day was the hardest because she had the worst headache and was miserable and scared. I laid in the bed with her the whole time because it was the only way she could stay calm.” 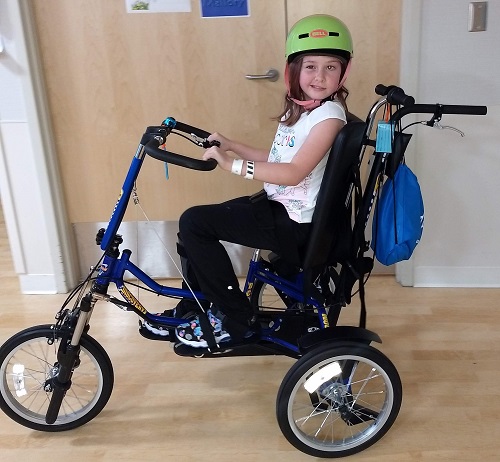 After discharge, Mallory went to Gillette Children’s Specialty Healthcare in St. Paul, MN, for occupational, physical, music and speech therapy. “We also saw a counselor and she went to school because they didn’t want her to fall behind,” Autumn said. “Her hours were full, from morning to afternoon.”

Amazing recovery
Mallory’s improvement from day to day was amazing, according to Autumn. “She did get discouraged and very homesick and still had trouble with headaches and nausea,” she said. “At one point, she had a headache that wouldn’t go away, so I asked them to do an MRI just to check. Something I can say about both hospitals is that they listened to me. I was included in the care process.”

On May 1, 2019, Autumn and Mallory went home to South Dakota. “When we got to the airport, there was a huge welcoming committee,” said Autumn. “When we got outside, there was a limousine provided by my best friend. We had it for the whole day. The driver asked where Mallory wanted to go, and she said McDonald’s.” Naturally.

Mallory continued with both physical and occupational therapy up until the start of school in September. While fourth grade has been challenging for her, Mallory continues to make progress. “The last time I saw her, she was on her way back home from rehab,” said Sandoval. “She was ambulating, had a great attitude and had participated actively in her therapies. Even though she was wearing an orthosis on her leg, you could see that she was walking well. She made an incredible recovery, both for the location and size of this hemorrhage.”

Mallory is an active fourth grader now who likes to do things with her hands. “She’s into making jewelry and is learning how to make rope,” said Autumn. “She won second place at a show recently with a quilt she’d pieced with her grandma.”

Mother's determination spurred her recovery
Mallory’s recovery is thanks to her mother’s determination to get her what she needed when she needed it. Autumn’s advice to other parents who find themselves in a similar position is, “Don’t sit back and let a doctor tell you what’s going on. If you think there is something wrong, you need to pursue it right away.”

Sandoval agrees. “Mallory was demonstrating that she couldn’t move one side of her body well,” she said. “That’s the kind of symptom that, in the adult world, is now more widely recognized as a sign of stroke that warrants immediate medical attention. We don’t think of kids having strokes because they are far less common and being nauseous or having a headache could be related to many other things. But in conjunction with weakness on one side of the body, slurred speech or weakness in the face, it should prompt you to seek emergent medical attention and escalate the care your child receives.”