On November 4, 2013, Laura Walz was managing a clothing store in Edina, MN, when her brain “blew up.” She had just made the morning run to the bank and was returning to the store. “Suddenly, I got warm, broke out in a sweat and became disoriented,” Laura said. “I actually didn’t know where I was.” She had enough presence of mind to call the store and discovered to her dismay that she was standing right in front of it.

A colleague took Laura to a changing room and asked her if she should call 911. Laura’s immediate response was “no,” but her colleague called anyway. Laura was transported to Fairview Southdale in Edina where it was discovered that she had a ruptured aneurysm. She was then transferred to the University of Minnesota Medical Center (UMMC). Neurosurgeon Andrew Grande, MD, led Laura’s care team at UMMC. “I’m not a religious person, but I believe an angel sent me to Dr. Grande,” she said.

“We treated the aneurysm, and everything went well,” Grande noted. “Laura spent a couple of weeks recovering in the hospital, which is typical for her condition.”

Laura’s memories about her hospital stay are scattered. She recalls nurses who were kind to her and is especially grateful to neurosurgery resident Coridon Quinn, IV, MD; and Chief Resident Molly Hubbard, MD. “Molly was my night angel because she was the one who caught my vasospasms, which happened at night,” Laura explained.

Common complication
Vasospasm is a common complication following a ruptured aneurysm. Irritating blood byproducts remaining in the brain cause the walls of an artery to contract and spasm, restricting the brain’s blood flow. Laura’s vasospasm was severe enough to require an injection of medication directly into the artery to relax it. This was done through a catheter during an angiogram procedure.

To effectively examine Laura’s neurological function during the angiogram, standard procedure precludes administering a sedative, according to Grande. “Molly saw how uncomfortable I was and asked me what music I wanted to listen to,” Laura said. “The first song that came on was Hangin’ Tough by New Kids On The Block.” Coincidentally, Laura was an online DJ for NKAirplay, a radio station that only played New Kids On The Block music. “I also did some graphic design work for Danny Wood and his breast cancer nonprofit, Remember Betty,” she noted. “Hangin’ Tough has been my song ever since.”

Challenging recovery
Although the surgery went well, Laura’s post-operative recovery was difficult. Climbing stairs was especially challenging. “I would get so frustrated because I could walk, but when the physical therapist wanted me to go up and down stairs, I would feel like I was falling,” said Laura. She would also struggle with speaking. “When I was in outpatient rehab, I worked a lot on speech,” she noted. “I had a lisp before the aneurysm and had developed a bad stutter after the surgery.” Hard work helped her overcome both conditions.

Perhaps most disturbing was the effect the ruptured aneurysm had on her long and short-term memory. “I lost several months and continue to have trouble remembering things,” Laura said. “To help me recall people’s names, I learned to associate things with them. For instance, I had a psychiatrist named Kaiser and to help me recall her name, I associated it with Kaiser rolls. I also learned that it’s important for me to write things down.”

Helping her multitask
As a busy store manager, Laura was good – really good – at multitasking before her aneurysm ruptured. “Dr. Grande noticed that I was struggling to stay focused and recognized something in me that he also struggles with – ADD [attention deficit disorder],” Laura said. “He suggested that I have my doctor prescribe Adderall. It was a life changer for me. I don’t repeat myself now, I can stay focused, and I feel more like myself because of it.”

Improved focus also helped Laura pick up painting again. She was able to finish a painting of a tree that featured dots and spots instead of leaves. “After the aneurysm, I had a spot I would see and named him Mr. Sparkle, which was why I did the dots in the painting,” she explained. “Dr. Grande suggested I see an ophthalmologist who prescribed prism glasses that caused Mr. Sparkle to go away. I don’t miss him at all.” She gave the painting to Grande.

Laura continues to wrestle with what many people who have had an aneurysm or other brain injury call their new normal. “I tell people I’m 70 percent of what I used to be,” she said. Her increased difficulty with recalling information makes her feel less intelligent than she was. “Dr. Grande says it’s not that the information is gone, my brain is just not able to retrieve it as easily,” she noted.

Laura also struggles with chronic fatigue. “When I talk to my doctors, I’m constantly reminded that no one knows how long it will take me to fully recover or if I ever will,” she said. “Everyone’s brain heals at different speeds.” 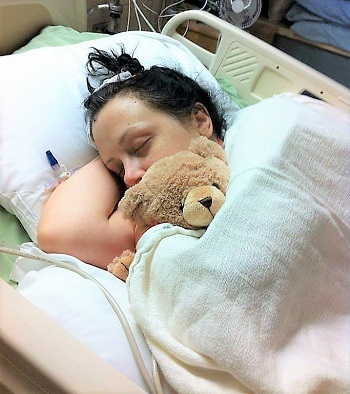 Laura recovering in the hospital with help from a friend

Should relatives be screened?
Six months after her aneurysm ruptured, Laura’s father had an aortic aneurysm that ruptured. Thankfully, he was treated immediately and recovered quickly. Because of the proximity of the two events, Laura was concerned about whether her two brothers were also at risk for an aneurysm like hers. Grande, however, reassured her. “We recommend that if you have two first-degree relatives who have had intracranial aneurysms, you should get screened,” he explained. As a result, her father’s condition wouldn’t necessarily require that her brothers be screened for brain aneurysms.

On the brighter side, Laura now manages another clothing store and loves her job. The company has been very supportive…her manager understands when Laura reaches a point at which she needs to slow down. “One thing I don’t take for granted is going from 60 to 70 hours a week to working a more reasonable 40 hours and making sure I take time out for fun,” she said. “Not everything is measured by your career.”

Advocating for others
Laura has also become an advocate for people in similar circumstances. “I want people, especially women who are more affected by aneurysms than men, to know that it’s out there,” she said. And she wishes there were local support groups specifically for aneurysm survivors. “I was referred to groups for stroke survivors, but it’s just not the same,” Laura noted.

Grande, who recognized Laura’s willingness to advocate and knew that she loves public speaking, arranged for her to talk to a Speech Pathology class at the U. “I told them about what I experienced after the aneurysm and about how they’re advocates for their patients,” she said. “We can’t easily speak for ourselves.”

When talking about her condition, Laura tells people that she didn’t have the “thunderclap headache” typically associated with a ruptured aneurysm. Instead, she had two episodes prior to the rupture that Grande said were “warning shots.” Once, Laura woke up with excruciating pain that ran down the side of her neck. Because it went away in about 30 minutes, she assumed she’d just slept in the wrong position. The second incidence of the same pain occurred when she was driving, and she had to pull over. Again, it went away. “I didn’t really think anything of it either time,” she said.

Five years have passed since her aneurysm ruptured and Laura has learned to be grateful that it happened. “Obviously, I wouldn’t wish this on my worst enemy, but it made me appreciate more things in my life,” she said.