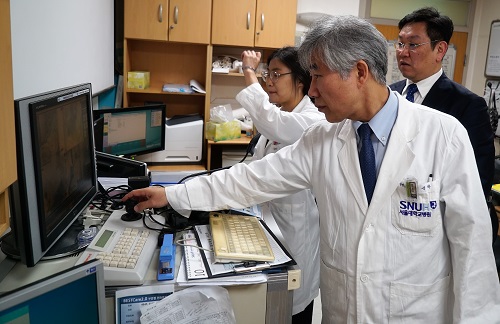 Faculty member, Michael C. Park, MD, PhD, recently visited Seoul, South Korea, to continue his work rekindling the U of M’s relationship with the Neurosurgery Department of Seoul National University Hospital. He was accompanied by neurophysiologist Joshua Aman, PhD, of U of M Department of Neurology and Udall Center of Excellence for Parkinson’s Disease Research.

This was Park’s second visit to the university. He met with Professor and former Chairman Dr. Sun Ha Paek (pictured at right with Park), who shares Park’s specialty as a functional neurosurgeon. Like Park, Paek’s patient focus is on deep brain stimulation (DBS). “He has an extensive patient database and clinical data he’s collected,” Park said. “He needs help with analysis…that’s where we come in.”

The interesting thing about the Korean database is that it’s comprised of intraoperative data from numerous electrophysiological readings. “They perform DBS surgery while the patient is under general anesthesia – we perform the procedure with the patient awake,” explained Park. “They take electrophysiological recordings throughout the procedure. It will be interesting for us to see what we can learn from the data. Our Udall Center team can potentially form some collaborations based on what we find. On the other hand, the Korean team is interested in the research that is happening at U of M, such as 7-Tesla imaging and image analysis. Our interests will give us opportunities to share information back and forth.”

While in Korea, Park attended a conference led by Kendall Lee, MD, PhD, of the Mayo Clinic Neurosurgery Department in Rochester, MN. This conference is held every year with the meeting site alternating between South Korea and Minnesota. “Dr. Lee suggested that for the 2019 conference, we should host it together,” said Park. “We could split the meeting between our two campuses.”

Deep connection to the U of M
The Department of Neurosurgery at Seoul National University College of Medicine was founded in 1957 by Professor Bo Sung Sim. Sim had returned to Seoul after two years of training in neurosurgery under William Peyton, MD, MS, PhD, and Lyle French, MD, PhD, at the University of Minnesota. His work in Minnesota was part of the International Cooperation and Administration program, which was designed to help the Republic of Korea recover from the devastation of the Korean War.

The University of Minnesota School of Medicine developed a special relationship with Seoul National University and provided training, both in Minneapolis and in Seoul, in many specialties of medicine. Subsequently, Professors Kil Soo Choi and Jeong Wha Chu also came to Minnesota for training in neurosurgery, returning to join the faculty in Seoul. Professor Choi would eventually become the second department chairman.