Renowned Canadian neurosurgeon/scientist visits the U, sparking inspiration and collaboration

“If you look at progress in neurosurgery over the last 100 years, it has, to a large extent, paralleled and depended on advances in technology,” said Garnette Sutherland, MD, Professor of Neurosurgery, University of Calgary, Canada. “One can see how technology plays a big role in patient outcome following a neurosurgical procedure.”

Sutherland, who has “played” with technology throughout his long career as a neurosurgeon, was on the U of M campus recently to participate in one of many “collisions” being orchestrated by the U of M’s Neurorobotics Consortium. These events help bring together scientists from many disciplines to spark inspiration and collaboration and to shape new ideas.

Continuing to evolve
“Everyone has special abilities and when you interact with different people from different backgrounds you begin to think about new ideas and directions,” Sutherland said about his visit to the U. “That is key to continuing to evolve as an investigator. We go back to our institutions armed with exciting ideas and potentials. Similarly, we inspire the institutions we visit with new ideas and concepts.”

Sutherland noted that some of the Minnesota investigators with whom he met are involved in analyzing surgeon and trainee performance. They are working on, “how we analyze performance to understand the challenges they encounter in striving to achieve excellence” he said. “The people in Minnesota have unique ideas about that. I will take that back to Calgary with me, and even more important, will create collaborations between our unit and the unit in Minnesota about big data analysis and how to look at surgical performance in a new way.”

Honoring the patient contract
Recognized as a leader in merging technology with neurosurgery, Sutherland was a key player in the development of the intra-operative magnetic resonance imaging (iMRI) technology, a high-field moveable MR system that gives surgeons detailed, 3-D MR images during surgery. This innovative technology has been used in treating more than 40,000 neurosurgical patients worldwide. The inspiration for this technology came from Sutherland’s commitment to honoring the contract he makes with his patients.

Prior to iMRI, for instance, neurosurgeons had to rely on post-operative imaging to see if all went well with a surgical procedure. “I remember seeing things that I didn’t like, and I would have to bring that patient back to the operation room,” Sutherland said. “That sparked a genuine interest in translating imaging technology into the OR. You could take your post-op images before you even closed the incision to optimize your patient’s outcome and honor your contract with them. That was one of our first neurosurgical inventions.”

Partnership and inspiration were key elements in bringing another innovation to life – the MR-compatible robot, neuroArm.

Inspired by the moon walk
As a teenager, Sutherland was deeply affected when Neil Armstrong walked on the moon in 1969. “That event inspired lots of young people around the globe into pursuing science and engineering and to think about doing something new, which I think NASA does so very well,” he said. It could also explain why Sutherland wondered what aerospace engineering could bring to neurosurgery.

“Engineers responsible for building robotic systems for the International Space Station or for Mars exploration have a tremendous amount of knowledge in areas such as collision avoidance and how you navigate something with a complex trajectory,” Sutherland explained. “That’s what neurosurgery is about…localizing the problem and navigating to that target without damaging anything [such as brain tissue] along the surgical corridor. Incorporating innovations for aerospace applications with neurosurgery produces superb navigation to a target.” 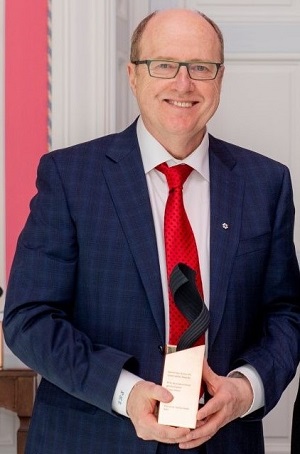 (At left) Garnette Sutherland with the 2019 Governor General’s Innovation Award* he received from Canada (source: Univ. of Calgary)

Working with industry
Sutherland’s team partnered with aerospace engineers to create neuroArm. “We contacted a Canadian company called MacDonald Dettwiler [now Maxar Technologies,]” he said. “They won the NASA contract to build the Space Arm – in Canada we call it the Canadarm. They also built another platform called the Special Purpose Dexterous Manipulator that’s on the International Space Station. They had a tremendous depth in aerospace engineering, and we worked with them to build our robot for neurosurgery, which incorporated the same kinds of technological advances.”

Partnering with the community
Sutherland’s team also partnered with the Calgary philanthropic community for project funding. “We met with the Friends of Medicine, a group of oil company executives,” said Sutherland. “We ran our proposal by some of them and they said they would commit to funding the project. One can use that great community support to gain provincial and national endorsement to make a project come to life.”

The varied partnerships took Sutherland and his team down some interesting, unpredicted paths. “When we first used neuroArm during a procedure, we noticed we were recording the forces of the tool and tissue interaction,” he said. “That was wonderful! It was the first time we were able to quantify how hard you push on the brain when you do a task. Based on that, we went on to put the same kind of sensors in conventional tools and developed what you might call ‘smart’ tools. If a surgeon uses those tools, they measure the force of the interaction between the tissue and the tool.”

Bringing innovation to education
Sutherland immediately saw the implications for neurosurgical education. “One of the potential problems with surgery is using too much force, which damages tissue,” he said. “Smart tools can help surgeons learn the art of surgery based on quantified metrics.”

Another project that spun out of this work, according to Sutherland, is building what’s known as single-domain antibodies, which are designed to work with targeted proteins. “We can combine them with nanoparticles and add a fluorescent marker that makes abnormal tissue fluoresce,” he noted about a trans-Canada endeavor working with the National Research Council of Canada in Ottawa, ON, and the University of Victoria in British Columbia. “Then the robot, which is under the surgeon’s control, can remove what’s fluorescing. That was not thought of when we began our original work on neuroArm.”

Sutherland noted another unpredicted path – “In thinking about the acoustic properties of tumors versus normal brain tissue, can we use sound, sight and touch to augment neurosurgical procedures?”

The possibilities are endless.

Sutherland’s contributions to science and medicine are reflected by 214 peer-reviewed publications, 31 monographs/book chapters, 16 patents and more than 300 international lectureships. His many accolades include receiving the Life Science Alley Luminary Award in Minnesota (2011), his induction into the Space Technology Hall of Fame (2014) and receiving the NASA Exceptional Technology Achievement Medal (2015). In addition, Sutherland was appointed Member of the Order of Canada in 2011 and received a *2019 Governor General’s Innovation Award, which is given to individuals, teams and/or organizations whose innovations are: