Long-term relationships among researchers often help fuel discoveries made at academic centers throughout the world. That’s certainly true of the friendship between U of M neurosurgeon Andrew Grande, MD, and Benedikt Berninger, PhD, who is a professor at the Center for Development in Neurobiology at King’s College in London, England.

Communication between the two friends received a boost when Berninger was recently asked to come to the U of M campus as a visiting professor. During the visit, he spent time with researchers in Grande’s stroke and stem cell lab and at the Stem Cell Institute. He also gave the Institute’s weekly lecture during a presentation titled, Engineering Neurogenesis for the Adult Brain.

Met during fellowship
The two men originally met in 2010 during Grande’s William P. Van Wagenen Fellowship in neural stem cells and neurogenesis at Ludwig-Maximilians University in Munich, Germany. “Andy was doing basic research on the possibility of converting glial cells into neurons,” explained Berninger. “That has real potential for treating diseases in which neurons degenerate, such as stroke.

“In the years since his fellowship, we have been working on this topic intensively,” Berninger continued. “He is highly motivated to move this forward, which is why Andy is interested in communicating with scientists like me.”

Since 2005, work in this arena has been reenergized, according to Berninger. “New hope and insights gained may lead to real advancement,” he said. “It’s worth it to try again using improved methods. We still have many things to learn.”

"Perfectly valid idea"
The researchers’ next step is to go from basic rodent models to testing their cell reprogramming theory on higher animals. “That requires several years of preparation,” said Berninger. “Then we can move forward to clinical trials. This is something that is bound to work to some degree. Converting glial cells to neurons is a perfectly valid idea and I think we need to test it with rigor to see what can be done with it.”

While on campus, Berninger had an opportunity to observe Grande during a surgical procedure – an aneurysm clipping. He was also able to observe the impact on a patient receiving deep brain stimulation surgery to help treat a movement disorder. “It was very impressive,” Berninger said. “I will definitely take that with me as well.”

The overall visit was an inspiration for Berninger. “I was really inspired by meeting with Andy; he himself is inspired by this approach and its possible future,” he said. “He wants to engage basic researchers like me and others in sharing his hope.” 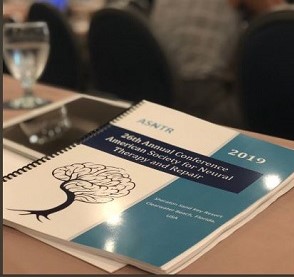 Taking their collaboration on the road
While he was in the States, Berninger made another stop with Grande and University of Minnesota Neurosurgery Department research colleague, Walter Low, PhD. They presented during the recent American Society for Neural Therapy and Repair Annual Conference, in Clearwater Beach, FL. The two-hour presentation included: