Imagine that you’re participating in your second American Birkebeiner cross-country ski race in northern Wisconsin. About halfway through, your brain blacks out, but your body somehow keeps you moving along the course. That’s what happened to 30-year-old Madison, WI, resident, Leif Evensen, during the 2019 race held in late February.

“The last thing I remember is that a friend of mine passed me and said, ‘Hi, how are you doing,’” said Leif. “I thought he was a completely different person from ten years ago.”

Skiing on autopilot
Leif skied most of the 50-kilometer course on autopilot and recalls very little from the race. “At one point, I stopped at an aid station, complaining of a headache and they treated me for hypothermia and dehydration, which didn’t do anything,” he said. 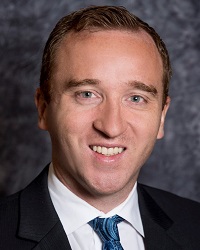 Taken to the local hospital, Evensen was again treated for hypothermia and dehydration, typical issues with skiers coming off the Birkebeiner. “At one point, they gave me a CT scan because I kept complaining about my head hurting,” he said. When the doctors read the scan, they transferred Leif to University of Minnesota Medical Center (UMMC) where he was put in the care of neurosurgeon Robert McGovern, III, MD (pictured).

“The doctor who called from the ER in Wisconsin said they had seen some blood and a mass in Leif’s brain,” said McGovern. “When he arrived, Leif was neurologically okay when he was awake, but kept drifting off.”

Pressure building
The blood in Leif’s brain was obstructing its natural drainage process and cerebrospinal fluid was accumulating, creating a condition known as hydrocephalus. As the pressure built in his skull, it was causing Leif to drift in and out of consciousness.

“We had to put a drain into the ventricle [one of the four connected fluid-filled cavities in the center of the brain] to remove the fluid,” McGovern explained. “If the pressure had built up too long, he could have gone into a coma. It was what we needed to treat first.”

But it wasn’t straightforward. The large mass was in the ventricle that needed to be drained and it had bled, causing the hydrocephalus. When the drain was finally in, it didn’t take Leif long to recover. “Within a few hours, he was alert and neurologically normal,” said McGovern. “After that, we got an MRI to get a better look at the tumor, which helped us plan our surgical approach.”

Rare tumor
The type of tumor that Leif had – a central neurocytoma – is exceedingly rare. “The tumor was really large,” noted McGovern. “I knew from the beginning that I wouldn’t be able to remove the entire mass in one procedure.” But it was important to remove as much of the tumor as possible because although benign, central neurocytomas can recur if not completely removed.

During the first surgery in March, McGovern and his surgical team removed everything they could see. During the second surgery on April 8, 2019, “We used BrainPath to help us avoid normal brain tissue,” said McGovern. “It gave us a more minimally invasive way of getting where we needed to go.”

The BrainPath® system includes an obturator with a minimally disruptive tip. An obturator is a device that blocks the opening of an instrument being introduced into the body. According to its manufacturer, BrainPath is designed to reduce damage by displacing tissues of the brain during advancement to the targeted abnormality. The sheath remains in the brain after the obturator is removed to serve as a protective portal for surgeons to easily maintain access to the surgical site.

Keeping watch
As they wrapped up the second procedure, the surgical team decided to leave tiny bits of the tumor that were attached to important blood vessels deep in Leif’s brain. The consensus on his follow-up treatment, according to McGovern, was to watch for any regrowth on subsequent MRIs.

Leif is recovering well from the two surgeries. “I’m back at work fulltime,” he said. “The hardest part was physical. My body was extremely sore and tight because I went from doing the toughest aerobic activity you could do to doing nothing. Now, I’m back to doing short runs.”

Impressed with care team
“Extremely impressed” with his UMMC care team, Leif noted that, “Dr. McGovern was helpful and understood that I am young and active and accommodated that as much as possible. The nursing team was also very, very good.”

While he was recovering in the hospital, Leif was determined to get back to his normal routine as quickly as possible. “I made it a point when my body was ready to get up, get showered, and dress in street clothes,” he said. “I walked around the ICU that way – which may have seemed odd to some people – but I believe it was one of the things that helped me get discharged early.”

The next step for Leif is to see how his MRI looks three months after the April surgery. “I’m really hoping the tumor hasn’t regrown because I don’t want to have to do radiation therapy,” he said. Radiating any regrowth would be the recommended course of treatment.

Because his condition “came completely out of nowhere,” Leif has some advice for people who find themselves in his situation. “It’s kind of a cliché, but make sure you’re living knowing everything could go away at any time. Don’t take things for granted, especially your health and relationships.”