Elizabeth Shih is a fifth-year PhD candidate working in the Alford Lab of the U’s College of Science and Engineering. She studies the results of applying mechanical force – stretching in different directions – to biomaterial, and human and animal tissue.

When she met neurosurgeon Andrew Grande, MD, Shih got interested in cerebral aneurysms.

An estimated 6.5 million people in the United States have an unruptured brain aneurysm. Each year, about 30,000 of those aneurysms rupture. That means a brain aneurysm ruptures every 18 minutes in this country.1

Low risk for rupture
“Statistically, an aneurysm is at low risk for rupture, but it’s still terrifying for a patient to be diagnosed with one,” said Shih. “No one wants to go through their lives thinking it probably won’t rupture. I wouldn’t be okay with that. But when does an unruptured aneurysm need surgery?” 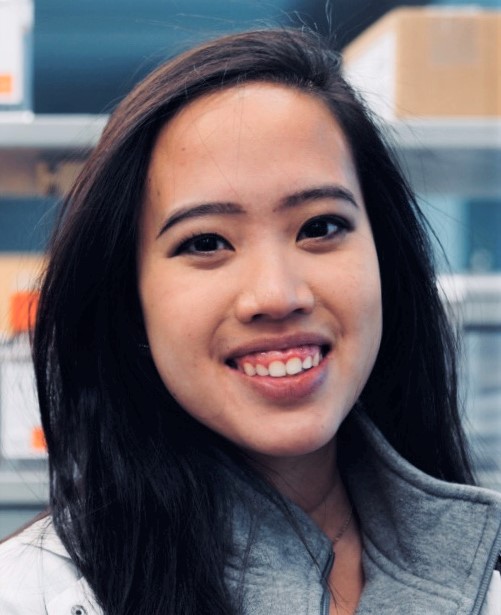 Shih (pictured at left) wanted to apply her experience with studying mechanical forces that drive structural and functional changes on the cellular level of tissues to the possibility of creating a more reliable way of determining whether an aneurysm would rupture. She learned from Grande and other neurosurgeons that several factors can cause a rupture, from the aneurysm’s size (small is good, large is bad), location, and growth, to family history, high blood pressure, and smoking.

“Dr. Grande has had a number of cases in which an aneurysm that looked small on the scan would suddenly rupture,” said Shih. “He would also see patients with gigantic aneurysms that had apparently just been hanging out for years.”

A mechanical problem
Shih and her colleagues in the Alford Lab believe that a ruptured aneurysm is fundamentally a mechanical problem at the cellular level, and a process known as tissue remodeling contributes to the weakening of the blood vessel tissue. “If we think about tissue remodeling in an aneurysm, we can split it into healthy remodeling, which is what all tissues go through as you develop and age,” she said. “There is also maladaptive remodeling, which we believe happens in many aneurysms.”

Because Grande performs numerous aneurysm surgeries, he had a quantity of patient-donated tissue available for Shih to use to help her understand its mechanical properties. Used to handling cow and pig heart valves and pericardium tissue that allowed her to cut shapes in the sizes she needed, Shih wasn’t prepared for just how tiny aneurysm tissue is.

Stretching tiny tissue
Typically, she would attach the tissue to a framework that would stretch it along two different axes. But the lab didn’t have a framework small enough to accommodate stretching the aneurysm tissue. “Andy uses tiny titanium clips to close an aneurysm and inhibit blood flow,” she said. “I asked if I could have some. With his help, we created a custom-built attachment using the clips so we could stretch the tissue.”

After completing a literature review, Shih learned that the protein composition in aneurysm tissue is fairly heterogenous. “In one area of the aneurysm, you might have one type of organization on the microscale,” she explained. “It might be completely different on the other side. That could lead to mechanical heterogeneity – different areas of the aneurysm having different properties. One region might be really stiff; another might be really weak. We think that might be important in determining the overall stability of the aneurysm.”

The result of this work is a paper soon to be published in the Journal of Vascular Research titled, “Characterizing Tissue Remodeling and Mechanical Heterogeneity in Cerebral Aneurysms.” Shih is first author; Grande is a co-author.

First to do this
“Our paper is the first to use a novel mechanical testing method, which was created by Professor Victor Barocas’ U of M research group years ago, and apply it to aneurysms,” said Shih. “We are the first to evaluate aneurysms’ mechanical heterogeneity.”

Shih is also doing work to correlate heterogeneity to failure of an aneurysm under load. “Preliminarily, I can say there is a correlation between how heterogenous an aneurysm is and how easy it is to fail under load experimentally using biomechanics,” she said.

In addition, Shih is working on developing a computational model that uses the novel mechanical properties she gathers from aneurysm tissue to evaluate in silico (computationally) how stable an aneurysm really is. “Making a clinically significant computational model is going to be a whole new ordeal,” she said. “It’s the goal of my thesis work.”