U of M surgical team reshapes baby’s skull to allow normal brain growth, help him grow into an active toddler 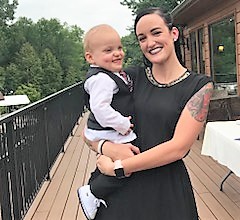 At 15 months old, Brockton Vogtlin is an active, normal little boy. “He's mobile and so close to walking…he's being a typical, risk-taking boy and I swear he hits his head constantly, but it doesn't phase him at all,” laughed his mother, Taylor Vogtlin (both are pictured at right).

Taylor is thankful that it doesn’t phase him. Brockton was born when he was just 27 weeks old, 13 weeks shy of a normal-term pregnancy. “He spent 89 days in the neonatal intensive care unit [NICU],” said Taylor. It was while he was in the NICU that he was initially diagnosed with plagiocephaly – a condition characterized by an asymmetrical distortion or flattening of one side of the skull. He was then referred to nurse practitioner Leah Kann in the U’s Plagiocephaly Program. 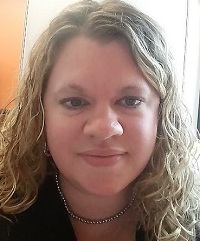 “In the NICU, they lay the babies mostly on their sides, which can create a long and narrow head,” said Kann (pictured at left). “He was three months old when he came in to see me but was still newborn-sized. At that point, his head was long and narrow, but because of some abnormalities along the sagittal ridge, I could tell that he had craniosynostosis, not plagiocephaly. We decided to wait until he was a bit older to get the confirming CT scan of his head because he was so small.”

Craniosynostosis affects one in 2,000 infants, making it relatively common. Kann noted that it is a disorder in which there is early fusion of the sutures of the skull. It produces an abnormally shaped head and can affect the appearance of the face. The deformity varies significantly depending on the suture or sutures involved.

“Brockton came back a few months later for the imaging, which confirmed craniosynostosis,” Kann said. “The sagittal suture had fused too early. As his brain was growing, it couldn’t do so side to side, just from front to back, which made his head very long and narrow. By opening the skull and rearranging the bones, his head shape will be more normal as his brain continues to grow.” Kann recommended waiting until Brockton was older to have the required surgery. 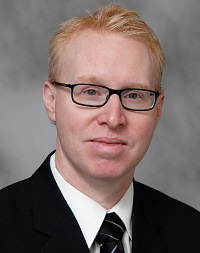 In October of 2017, Daniel Guillaume (pictured at left), MD, MS, Director of Pediatric Neurosurgery at the U of M Masonic Children’s Hospital, partnered with craniofacial plastic surgeon Martin Lacey, MD, to perform the surgery. “Brockton’s was a pretty straightforward case,” said Guillaume. “There are different ways of doing this surgery…we chose to do a cranial vault remodeling.” The procedure involved removing and reshaping the fused cranial bones. “Basically, we made his head shape normal in the operating room,” explained Guillaume.

“The first couple days after the surgery, the nurses and I took turns during the night to calm Brockton down because he was in so much pain,” said Taylor. “We had to hold his arms and legs to prevent him from reaching his head.”

With the resilience so common in children, Brockton recovered quickly. “His head healed fast,” Taylor exclaimed. “By the time he was home, I remember only giving him his pain reliever a couple times.”

Even though she is a registered nurse who works at the U’s Clinics and Surgery Center, Taylor learned something important as she went through this with her son. “I had to step back from my nursing role and focus on playing the mom role,” she said. “This was the time that we needed to show Brockton how to be strong.”

It was also a time for trust. “We needed to trust the surgeons because they know exactly what they're doing,” Taylor said. “We also needed to trust that our child is strong and resilient. My son has shown me how to be strong, and he's only been here for 15 months.”

Brockton and Taylor go for regular follow-up visits to the U’s Craniofacial Clinic. “He has been doing very well since the surgery,” said Kann. “His head shape is much better and he’s developing appropriately. He’s just a really cute little guy.”