Years of scientific progress lead to hope for a glioblastoma patient

“Zero stars, would not recommend, it absolutely sucks,” is how Keegan Walsh describes life since his wife, Laura, was diagnosed with glioblastoma, the most common and aggressive form of adult brain cancer. Her journey so far has included two brain biopsies, two shunt emplacements for removing excess fluid from her brain, and one brain tumor resection – all within six months and starting just two weeks after delivering her third child. Laura also went through rounds of radiation and chemotherapy. Despite these treatments, her cancer continued to grow.

After her surgeries at the Mayo Clinic, Laura was referred to Neurosurgery Department Head Clark C. Chen, MD, PhD, by her oncologist. Chen is the site lead for a nationwide clinical trial of a drug known as ONC201, which is designed to fight glioblastoma.

Good candidate
Based on data collected in Chen’s lab, Laura is a good candidate for the trial because her tumor had a specific genetic mutation and low levels of a protein called epidermal growth factor receptor (EGFR). ​Activation of ​EGFR​ stimulates ​the growth of cancer cells. “Like a car at a traffic light waiting for a green light before crossing the intersection, cells need a ‘green light’ signal before they can grow,” explained Chen. “EGFR provides the signaling that enables the growth of glioblastoma cells.”

With low EGFR levels, the growth of Laura’s tumor depends on another signal. Chen’s previous work suggests that this signal is carried by dopamine, a chemical found in the brain. Dopamine belongs to a class of chemical messengers called neurotransmitters. In a patient not afflicted with brain cancer, dopamine is necessary for important brain functions. Unfortunately, in a subset of glioblastoma patients, dopamine also stimulates tumor growth. ONC201 is a drug designed by the company, Chimerix, to disrupt this stimulation. The drug has been cleared by the Food and Drug Administration (FDA) for clinical trial purposes.

Decade-long journey
The discovery that Laura’s tumor may be sensitive to ONC201 started more than a decade ago when Chen’s research team carried out a study that tested how every gene in the human genome contributed to glioblastoma growth1. This study unveiled the multitude of signals that fuel this growth and were not previously recognized, including the contribution of dopamine. “We found that only a subset of glioblastomas are sensitive to drugs that disrupt dopamine signaling. It took several more years of work before we discovered how EGFR influenced this sensitivity,” said Chen. 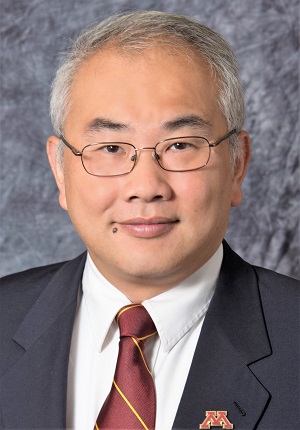 Chen (pictured at left) drew an analogy between his findings and power grids. “The signals that fuel glioblastoma growth are like power stations that support an electric grid,” he said. “In grids with multiple power stations, disrupting one station may not cause an outage because the remaining power stations fill in. Outages can be triggered, however, by disrupting multiple power stations.” Therefore, if glioblastoma receives growth signals from both EGFR and dopamine, disrupting dopamine alone ​will not shut down tumor growth, according to Chen. “In contrast, glioblastoma with low or no EGFR expression is dependent on dopamine signaling,” he said. “Our work suggests that patients with these tumors are exquisitely sensitive to ONC201.”

“The best birthday gift”
Since enrolling in the clinical trial in February 2021, Laura has been taking five of the ONC201 pills every Friday. She goes in for lab appointments every four weeks, and every eight weeks has an MRI to see how the tumor is doing.

The first and second MRIs showed that the tumor had shrunk significantly, while the third and fourth MRIs showed continued control of tumor growth. These MRIs suggest that the drug is working as would be expected based on Chen’s research. The third MRI took place on Laura’s birthday. “I was able to give her the news that there is no evidence of tumor growth,” he said. “I think it was the best birthday gift that I could offer to any brain tumor patient.”

Because of this impressive response, Laura has not needed any further surgeries since starting her care at the University of Minnesota.

It takes a village
This journey has been incredibly challenging for Laura and her family. “If you add all the things she’s gone through, we’re looking at two years of figuring out what her new normal will be,” Keegan said. “She’s made leaps and bounds in recovering her physical and mental capabilities; however, Laura’s short-term memory seems to be her greatest challenge. She also has gaps in memory from around the time the tumor was discovered. She’s done occupational, speech, and physical therapy. There is a lot to deal with … new challenges arise from day to day.”

The recovery process has been enabled by Laura and Keegan’s parents. “We would be in a lot more hurt if my folks weren’t retired,” he said. “They have lived with us now for 18 months and help with both Laura and our three kids while I’m working full-time. Laura’s folks help us on nights and weekends or when my parents are unable to. I can’t put into words how grateful we are to have them in our lives. It takes a village to deal with cancer.”

Laura and Keegan appreciate the impact that Chen has had on their lives. “His positivity has been great,” said Keegan. “Following the first MRI, he came into the waiting room and was excited about how good it looked. It’s nice to have that positive energy when you’re dealing with such a Debbie Downer situation.”

Chen notes, “In addition to dealing with the daily challenges, Keegan and Laura are essentially living from MRI to MRI, never knowing when the news of tumor growth will come. As a community, we should recognize how difficult this is and do our best to support them.”

“Not to yield”
Chen and his U of M research team are determined to help more patients like Laura. “The National Brain Tumor Foundation has given us a grant that will enable us to start a clinical trial to identify a broader segment of glioblastoma patients who will benefit from this drug,” he said. “We’re in the final phases of putting the infrastructure in place.” Long-time U of M Foundation donors, Bob and Corrine Ferris2, are also helping to fund the new trial.

“Reflecting on this decade-long intellectual odyssey gave me a new-found appreciation for Tennyson’s words as we continue our path toward a glioblastoma cure, ‘to strive, to seek, to find, and not to yield,’” said Chen.

2Thanks to generous funding of a clinical trial, brain tumor sufferer getting more time with loved ones