Jason Kopacz is a committed runner. He has completed the New York, Disney, and two Twin Cities marathons, and on April 18, 2022, he ran the Boston marathon. He set a personal record during this year’s Boston run, something that’s difficult to do as the course is so challenging.

Would it surprise you to learn that Jason didn’t really start running until after he was diagnosed with Parkinson’s disease (PD) in 2014? He was 36 when he got the news.

Jason’s grandmother had Parkinson’s, so there may be a genetic component to his having the condition. He works with Paul Tuite, MD, of the Department of Neurology, to help manage the disease. “For the first two years, I didn’t have to take any medication,” Jason said. “Dr. Tuite just recommended changing my diet and exercising.”

Exercise helps
Research has shown that exercise is one of the best ways to help manage Parkinson’s disease symptoms, but Jason may have taken it to the extreme. “We used to joke that my wife, Kristi, and I only used our elliptical trainer as a clothes dryer,” he said. “The day I got my diagnosis, we decided to get Fitbits and started working out at the same time. I took a little bit more of an aggressive approach, but my wife has been with me pretty much the whole time I’ve been running. I have lost more than 90 pounds since my diagnosis. It’s amazing how different my life is now.”

In one way, Jason followed the typical course of someone who has Parkinson’s. He eventually had to begin taking medications to help him manage his growing symptoms. “If you take Parkinson’s medication for too long, however, your body starts getting jittery and you develop what’s known as dyskinesia [uncontrolled, involuntary muscle movement],” he said. “Because I was concentrating on keeping my body from moving, I would also get really stiff.”

Deciding to get DBS
Consulting with Tuite and Robert McGovern, MD, of the Neurosurgery Department, Jason decided to have deep brain stimulation (DBS) surgery. “With folks who have Parkinson's disease, we begin to think about deep brain stimulation when their medications start wearing off more frequently and they can't move like they're used to or they start developing side effects,” said McGovern. “The surgical procedure isn’t a cure for Parkinson's, but it helps improve the patient’s quality of life for as long as possible.” 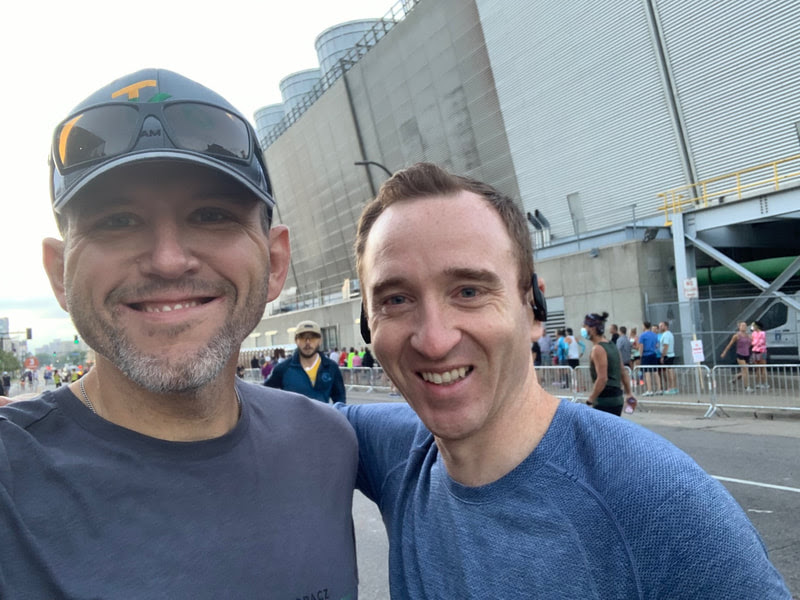 Jason and McGovern (pictured here with Jason at the Twin Cities Marathon) discovered they had a common interest early in their relationship. “I remember meeting Dr. McGovern for the first time during a Zoom call in my car,” said Jason. “He mentioned something about marathoning, and I told him I’d done Twin Cities and Disney and that I was trying to get to Boston by doing another Twin Cities Marathon. During the appointments that led up to the surgery, all we talked about was marathoning. We go back and forth about the sport on a regular basis. I consider him my friend.”

First of two procedures
While McGovern enjoys “nerding out” about running with his patient, his primary focus in January 2021 was on the first of two DBS procedures he would perform on Jason at M Health Fairview University of Minnesota Medical Center. Deep brain stimulation is a neurosurgical procedure involving the placement of a medical device called a neurostimulator, which sends electrical impulses through implanted electrodes to specific targets in the brain to help treat movement disorders, including Parkinson's disease, essential tremor, and dystonia.

Surgery on both sides
Jason’s left side was the one primarily affected by his condition. Because Parkinson’s disease tends to be lateralized, many patients start off with one side that's much worse than the other, then it gradually starts to involve the other side, according to McGovern. As a result, Jason would need two surgeries. “They did the right brain-left body first,” he said. “Then they implanted the stimulator in my chest and did my left brain-right body.”

Both surgeries went well. “We were able to place the electrode in a good spot each time,” said McGovern. “His anatomy was fairly classic, so we didn't really have to change anything.”

Easy recovery
Following the procedures, Jason’s tremors were gone. “Recovery was pretty easy,” he said. “I had to take a couple of weeks off exercising, but there wasn’t really any pain, there was just a weird feeling in my head from having the electrodes there. I don’t really notice it now at all.”

True to his nature, Jason joined another elite club during this process. He was one of less than 10 DBS patients a year who volunteer for an additional research study through the U of M’s Udall Center for Excellence in Parkinson’s Disease. While data is always collected intraoperatively from recordings taken from the implanted electrodes, Jason agreed to have a second set of temporary electrodes implanted that extended through the skin of his abdomen.

Commitment to research
“The patient comes back the week following their surgery and the external wires are hooked up to a research recording rig for two days of studies and then removed,” explained McGovern. “Jason’s participation in that study is helping us investigate how DBS works and how we can improve it. People with PD are very committed to helping others with this disease.”

Another commitment that Jason is making to Parkinson’s disease patients is through his foundation, Team Kopacz. The group hosts an annual charity golf tournament and has raised more than $130,000 for PD research. Even though the event was affected in 2021 by the COVID pandemic, they were still able to donate almost $50,000 to the Michael J. Fox Foundation and the U of M. “We’re hoping to do more this year,” he said.

Start low, then adjust
Since his surgeries, Jason has needed a few follow-up appointments to adjust his stimulation settings. “The thing about the doctors at the U of M is that they try to get you to the lowest simulation level possible from the beginning,” he said. “That enables them to turn it up later, if needed. I really appreciate that approach.”

McGovern believes that his patient is doing great so far. “His movement, sleep, and dyskinesia have all improved,” he said. “Jason should benefit from his surgeries for a very long time.”