In 2016, Braunschweig, Germany, resident Steffen Rhode went to an eye doctor because he was having trouble with the vision in his left eye. When the prescribed glasses didn’t help, he went to another ophthalmologist who told Steffen he thought the problem was his brain, not his eye, and referred him to a neurologist. That was when Steffen had his first MRI. The image showed something in his brain, but the doctor wasn’t sure what it was.

“It was difficult at the beginning because I wasn’t getting explanations from anyone about my problem and I didn’t know the questions to ask,” Steffen said. “Navigating the entire process was up to me.”

Steffen then spent 10 days in a Braunschweig hospital going through numerous tests. Despite everything, he realized that he still wasn’t getting the answers he needed, so Steffen went to Charité in Berlin, Europe's largest university clinic. “I found a very good doctor there who wanted to do a brain biopsy to understand what she was dealing with,” he said.

Biopsy revealed glioblastoma
When he decided to have the biopsy later in 2016, it revealed that Steffen had a glioblastoma in his brain stem. He was 35 at the time. The aggressive brain tumor meant that his prognosis wasn’t good, but Steffen didn’t hear that from his doctors in Germany.

He turned to the Internet for answers. Steffen discovered that the average lifespan of someone with his diagnosis is well less than a year. His research also told him that the glioblastoma would start growing into his brain and at that point, there would not be much his doctors could do. “Honestly? I was preparing to die within a year or even faster,” Steffen said. “That was my mindset for that time.”

His brother and ex-girlfriend believed that something more could be done for Steffen. “They weren’t going to give up until they found something or someone who could help,” he said. “They discovered a lot in their research but the only way they found to actually destroy the tumor was through laser ablation. I asked several neurosurgeons in Germany and Europe about this kind of treatment, but it wasn’t available.”

Laser ablation a possible solution
Laser ablation involves a pea-sized incision being made in the skin and a similar-sized hole drilled in the skull. A laser probe is inserted in this small opening directly into the tumor and used to destroy the cancer cells, with minimal impact to nearby healthy brain tissue. This innovative laser treatment requires real-time MRI monitoring and a dedicated intra-operative MRI team. It cannot be performed in a conventional operating room. 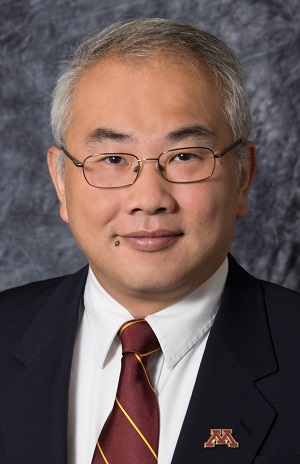 Steffen’s research team began looking at different places that offered laser ablation and ultimately discovered Clark Chen (pictured at left), MD, PhD, who currently serves as the French Lyle Chair and Head of the Department of Neurosurgery at the University of Minnesota.

When Chen received Steffen’s MRIs, he realized he was fighting overwhelming odds, especially given the tumor’s location in the brain stem. “Every millimeter of the midbrain could impact Steffen’s neurological function,” Chen explained. “It’s the highest priced real estate in the brain. All the neurons in the cortex converge in the brain stem … surgery in that area could impact who Steffen would become after the procedure.”

Despite the odds, Chen agreed to take Steffen’s case. “He was 35 and dealt an unfair hand by fate. I wanted to do everything that I could to even up the odds by offering him the best that modern medicine has to offer.”

But Steffen had a significant hurdle to jump because his health insurance wouldn’t pay for him to go to the United States for treatment. “We set up a crowdfunding page and the response was amazing,” he said. “I was hoping we could raise a portion of the money required, but within four days, we had everything we needed. More than 1,600 people donated.”

Steffen’s father and ex-girlfriend accompanied him to the States in February of 2017. “While we had conversed on multiple occasions by phone and mail, I met with Dr. Chen for the first time a couple of days before the surgery,” Steffen said. “He explained what would happen during the procedure and answered all our questions.

Communication was key
“The overall communication was so great and made such a big difference,” he continued. “Right before they started the surgery, Dr. Chen called everyone on the surgical team to my bed, including my father and girlfriend. He explained what was going to happen in such a way that I felt everyone knew what they had to do, and no one seemed worried about what would happen. I wasn’t scared at all.”

Chen faced significant challenges in the operating room. State-of-the-art technology called magnetic resonance thermometry laid the foundation for his surgical approach. “Through this technology, I could see real-time how fast and how far the laser’s heat was propagating,” he said. But Chen relied on more than technology, explaining, “you have to depend on judgement cultivated through years of treating these tumors, factoring in both the tangibles and intangibles.”

Steffen went back to his hotel a day after the procedure, which is a typical hospital stay for a patient who has laser ablation. “Because he was so far from home, I asked him to stay for a week to make sure everything was fine,” Chen noted.

Quick recovery
Recovery for Steffen wasn’t too difficult. “I had some trouble with my eyes,” he said, “but it was easier than recovering from the biopsy, which took more time. A week after the procedure, I felt fine and could fly home.” 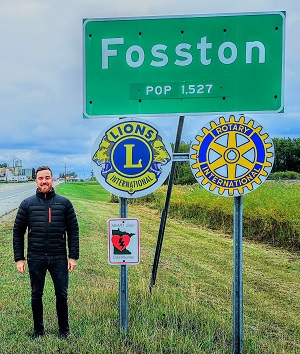 Glioblastoma survivor Steffen Rhode on a visit to Fosston, MN, where he once spent time as an exchange student

Steffen’s double vision continued for several days. “When you do laser ablation, tissues swell and cause problems for the adjacent nerves,” Chen explained. “It’s not uncommon for patients to have temporary problems after the surgery. If the nerves are uninjured, the problems eventually solve themselves.” As they did in Steffen’s case.

After returning to Germany and back into his local doctor’s care, Steffen has been going in every three months for an MRI. “Each time, you can see the tumor shrinking,” he said. “If you think about it,” Chen said, “Steffen went from having no options to being effectively cured of his disease. He experienced the full spectrum of emotions.”

"Can live again"
Such an emotional rollercoaster is not unusual. “Many of our glioblastoma patients live from MRI to MRI,” Chen said. “They never know what the next image will show. That kind of stress really compromises their quality of life. For the patients like Steffen who benefit from the procedure, it usually takes a while before they realize they can live again.”

Steffen agrees. “I’m regaining trust in the fact that my life may be longer than I had thought,” he said. “I expected to die and was preparing for that. Then suddenly, I’m expecting to have more time, which is great. Now, my biggest challenge is coming up with how I want to live this life. I’m in the process of figuring out what that means.”

Steffen flew to Minneapolis in September of 2018 to visit Chen. “It was heartwarming to see how well he’s doing,” said Chen. “I think this case is illustrative of how much we can achieve together between patient and doctor. If Steffen hadn’t searched the Internet, he wouldn’t have found me. If I had brushed him off as just another patient with unrealistic expectations after reading information on the Internet, we would never have achieved this result. That mutual respect was the foundation of our therapeutic success.”