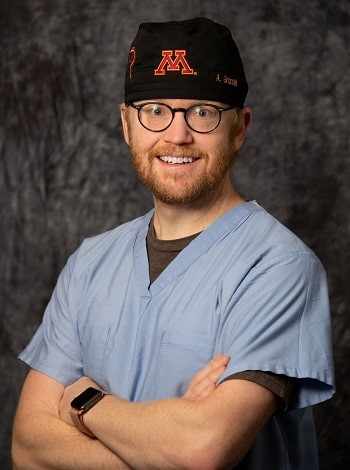 Andrew Grande, MD, is from the Twin Cities. He grew up in the Minneapolis lakes area and then later moved to St. Paul where he attended high school at St. Thomas Academy. He graduated from St. Olaf College (Northfield, MN) with a BA in chemistry and then attended the University of Minnesota Medical School. During college and medical school, Dr. Grande was active in research, working in the laboratories of Drs Esam El Fakahany, Virginia Seybold, and Walter Low. These experiences later culminated in a burning curiosity in and passion for using stem cells to treat stroke.

Dr. Grande completed his neurosurgical training at the Mayfield Clinic and University of Cincinnati. During his training, he worked very closely with Dr. John Tew, learning the nuances of trigeminal neuralgia treatment, including both microvascular decompression and radiofrequency ablation. He then went on to complete a fellowship with Mario Zuccarello, Andrew Ringer, and Todd Abruzzo at the University of Cincinnati in both endovascular and cerebrovascular neurosurgery. During this time, Dr. Grande was exposed to intracranial bypass surgery for treating moyamoya disease and to cutting-edge endovascular treatments such as the use of Onyx glue for treating cerebral aneurysms.

During his residency and then continuing into his fellowship, Dr. Grande was involved in stem cell research with Dr. Masato Nakafuku at Cincinnati Children's Hospital. Professor Nakafuku was one of the world's first to demonstrate neurogenesis in the hippocampus following stroke and he remains internationally recognized for his work with adult neurogenesis. In Nakafuku's laboratory, Grande's research focused primarily on reprogramming cells within the cerebral cortex to form neurons following stroke.

In 2010, Grande was the recipient of the William P. Van Wagenen Fellowship from the American Association of Neurological Surgeons. As a Van Wagenen Fellow, he traveled to Munich, Germany, where he completed a post-doctoral fellowship in the laboratory of Dr. Magdalena Gotz at Ludwig-Maximilians-Universitat. There he focused his research on identifying afferent connections to new neurons generated in the rodent cortex following a cortical layer specific injury.

Following his post-doctoral fellowship, Dr. Grande spent one month as a visiting neurosurgeon with Dr. Juha Hernesniemi in Helsinki, Finland.

Dr. Grande joined the University of Minnesota Department of Neurosurgery in 2011. His clinical interests are in treating cerebral vascular diseases, using either open vascular or endovascular techniques. He has specific interests in treating complex aneurysms, moyamoya disease, and trigeminal neuralgia.

Dr. Grande also directs the Stroke, Brain Injury, and Stem Cell Lab at the University of Minnesota. His research is focused on translating stem cell therapies for stroke from the bench to the bedside. Ongoing studies include exogenous cord blood stem cell transplantation for neuroprotection, reprogramming reactive astrocytes to form neurons, and characterizing normal adult neural stem cells found in the brains of humans and other large animals.

"It has always been a dream of mine to be a neurosurgeon in Minnesota, in particular at the University of Minnesota. I was born and raised here, my entire family is here and there is nothing I enjoy more than interacting with Minnesota patients. When contemplating places to work, I only considered Minnesota; I just knew I could be a better neurosurgeon here. I think there is something comforting in having a neurosurgeon with whom you have some connection.

Philosophy of Care:
My philosophy is to care for others as I would my mother, father, wife or child. I ask my patients to call me "Andy" because it's important to be on a first name basis with those who entrust their lives with me. While neurosurgery is a world of unpredictable fates, I am committed to each patient to do my absolute best all the time.

American Board of Neurological Surgeons Diplomate

Dr. Grande co-directs the Stroke, Brain Injury, and Stem Cell Lab at the University of Minnesota. His research interest is focused on translating stem cell therapies for stroke from "the bench to the bedside." Ongoing studies include exogenous cord blood stem cell transplantation for neuroprotection, reprogramming reactive astrocytes to form neurons, and characterization of normal adult neural stem cells found in the brains of humans and other large animals.