Changes are being made to the electroconvulsive therapy (ECT) service at the University of Minnesota Medical Center (UMMC) that will affect providers, patients, and learners. Leading the changes is ECT service medical director and Department of Psychiatry and Behavioral Sciences faculty member, Ziad Nahas, MD, MSCR. ECT is used to treat conditions such as treatment-resistant depression, severe psychosis, and catatonia.

“As of the week of August 2, 2021, the service is being run entirely by our department, with all of the hospital ECT consults directed to our faculty,” explained Dr. Nahas. The service continues to closely collaborate with the Department of Anesthesia.

Patient-centric
Making these changes means that Dr. Nahas and his team are running a patient-centric service where the attention to “first, do no harm,” is a high priority. “We will not simply apply tools without careful consideration of their risks and benefits,” he said.

In addition to Dr. Nahas, providers in the ECT service include Gamze Çamsari, MD; and Saydra Wilson, MD (as soon as their credentialing process is completed). Nurse Manager Karmen Rushton, RN, leads a team of “remarkably competent nurses and psychiatry associates,” noted Dr. Nahas. “Our ECT staff is uniquely qualified to deliver this service.”

More evidence-based
As leader of this important service, Dr. Nahas is using the opportunity presented by a departing colleague to standardize processes and procedures and move to more academic, evidence based ECT practices.

Part of the evidence that Dr. Nahas wants his team to track includes efficacy and cognition measures; one of which is something known as “time to reorientation.” After a patient regains consciousness following the light anesthesia given before the ECT procedure, they are asked five questions: full name, date of birth, where they are, day of the week, and the date. 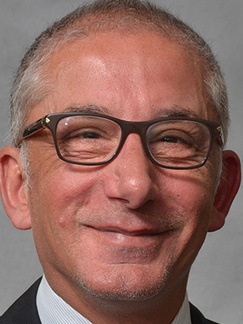 “Patients take some time to regain their orientation,” said Dr. Nahas (pictured at left). “The way patients start remembering things is almost like watching them age in front of your eyes. They will first say their full name because that’s one of the first things we learn.”

It’s important to track the time between when the patient first opens their eyes after the anesthesia wears off to when they become fully reoriented because it’s known to predict long-term cognitive impairment, one of the potential side effects of electroconvulsive therapy. “It’s like a vital sign,” said Dr. Nahas. “If a psychiatrist is wondering if it’s worthwhile going beyond an average number of ECT sessions and the patient is starting to show a longer time to reorientation, the risk/benefit ratio is changing. They may want to think of an alternative treatment.”

Building the data
When the Food and Drug Administration reclassified ECT devises as Class II in 2018, which expanded the patient population upon which they can be used, the agency asked clinics to start collecting cognitive data before and after the procedure, according to Dr. Nahas. While that data has been collected from the clinic’s patients, it is not yet in a broadly shareable format. “We are planning to create such a database as soon as we overcome electronic health record coding issues,” he noted.

Making these changes is a first step in preparation for the opening of an Interventional Psychiatry Program at UMMC. The new service will provide procedures such as ECT, transcranial magnetic stimulation, ketamine injections, and vagus nerve stimulation. “The flow standardization we are working on now will translate to better integration and coordination among the treatment protocols from an algorithmic standpoint,” said Dr. Nahas. “For instance, if the patient is presenting with a particular level of treatment resistance, you had better start with this treatment and then you can move to this one. There should be an evidence-based protocol for how intervention tools are applied clinically in the most optimal way.”

Benefitting learners
The changes are benefitting the learners coming into the ECT clinic, including residents and medical students. And this year’s Neuromodulation Fellow, Camille Merhi, MD, is helping to shape them.

Because of the model being built by Dr. Nahas and his team, he believes it’s possible that other ECT clinics will implement the changes they are putting in place. “It may give us a chance to share our model throughout the Fairview system and ultimately, with the state of Minnesota,” he said. “I can easily see this as a prelude to having our own ECT training course. There is no academic center for such training in the Midwest – people have to go to institutions such as Emory or Columbia to get it.”

Learn more about the impact of ECT on treatment-resistant depression.