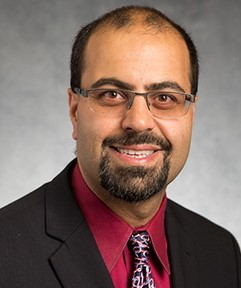 “One of the fundamental problems in psychiatry is that our treatments are often partially effective,” said Widge (pictured at left). “When they work, it’s great, but too many patients are left with residual symptoms.” His research – and the point of his paper – was to identify a brain stimulation mechanism that could be used as a long-term, reliable treatment for patients with conditions such as depression, addiction, or anxiety.

To achieve that goal, he and his collaborative research team took a group of patients who had been through a deep brain stimulation (DBS) clinical trial and altered their stimulation settings, either on or off, while stress testing cognitive control, one of the brain’s systems involved in executive function.

Widge and his research team found that when they stimulated a tiny point on the brain, it improved cognitive control. “For the first time, we were able to show that one of the ways this neural stimulation works is that it makes patients slightly better at exercising cognitive control,” he explained. “We may be nudging their own self-control, their own self-recovery system, into a slightly more useable state.”

It’s particularly exciting for Widge to spend 15 minutes on his “soapbox” with this audience, which consists largely of surgeons and representatives of medical device companies. He feels it could spark interest in funding clinical trials or connect him with potential collaborators. It’s also an opportunity to spotlight the exciting work being done in neurostimulation at the U. “It gets people who will be at this conference interested in what we’re doing,” he said. “It will give the audience a chance to say, ‘Hey, those guys at the U of M are doing some great stuff and are really on the cutting edge.’”