(Note: February 24 – March 1, 2020, is National Eating Disorders Awareness Week. This story highlights some of the work the Department of Psychiatry & Behavioral Sciences is doing to improve the lives of people with eating disorders.)

According to the National Eating Disorders Association, “eating disorders are serious but treatable mental and physical illnesses that can affect people of all genders, ages, races, religions, ethnicities, sexual orientations, body shapes, and weights. National surveys estimate that 20 million women and 10 million men in America will have an eating disorder at some point in their lives.”

The National Association of Anorexia Nervosa and Associated Disorders estimates that of that population, about four percent of American women suffer from anorexia in their lifetime. 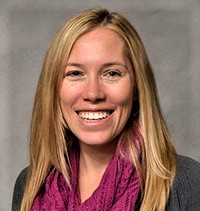 Assistant Professor Ann Haynos (pictured at left), PhD, is a member of the Minnesota Center for Eating Disorders Research, a group that aims to, “understand how people develop and persist in eating disorders and how we can better serve them.” She is leading a multidisciplinary U of M research team that is conducting an innovative study about understanding and treating anorexia nervosa. The U is the only site for this study funded by the Hilda and Preston Davis Foundation, which channels most of its financial resources toward organizations whose attention is concentrated on eating disorders and education for the underprivileged.

State of treatment unclear
Why is this work important? “The state of treatment for people with eating disorders is really unclear right now,” Haynos explained. “We know people get better, but don’t have a strong sense of why or what we can do to help them. For a long time, we have thought the way their brains processed information is part of what contributes to eating disorder symptoms. If we could shift the way that internal processing is done, we can help people with eating disorders react more productively to their food, their anxiety, and their eating.”

The team is taking a novel approach to their research. “We’re using functional MRI [fMRI] for the first time to create real-time neurofeedback,” Haynos explained. During the imaging process, the researchers can see what’s happening in the subjects’ brains as they react to pictures of basic threats to which anyone would react strongly, according to Haynos. The fMRI images show how blood is moving through their brains, indicating which parts are being actively stimulated.

Real-time neurofeedback
“Even more exciting, we can take that information and feed it back to the subject in the scanner, allowing them to understand that when they see a certain image, their brain responds in a certain way,” said Haynos. “This hasn’t been possible until fairly recently.”

During the imaging session, subjects are asked to simply look at the images; at other times, they see a thermometer on each side of an image. These thermometers show their brain’s activity and how it responds to their attempts to control that activity, according to Haynos. This is about using neurofeedback to help regulate the amygdala, a small set of neurons located deep in the brain’s medial temporal lobe. The amygdala has been shown to play a key role in processing emotions and may be involved in keeping people stuck in eating disorders.

Begins in April
The two-year study is expected to kick off in April. “It’s taken a lot of people to get us up and running,” said Haynos. “In addition to members of the Department of Psychiatry, we’re working with the U’s Center for Magnetic Resonance Research, an engineer, a physicist and a biostatistician.”

She added that people who have eating disorders often feel limited by the treatment options available to them. “Our field is extremely new. We desperately need to do research to help us as providers and to help people with eating disorders know what to do to support their recovery,” said Haynos. “This is one of several studies here at the U aimed at creating options for people with these conditions that are so disruptive to their lives.”

Learn more about eating disorder research at the U