A recently awarded National Institute of Mental Health grant of $1.7 million is enabling a U of M research team to test how well combining transcranial magnetic stimulation with the “gold standard” treatment will help young people with Tourette’s syndrome.

What is CBIT?
Last year, the American Academy of Neurology recommended that all patients with Tourette’s get CBIT as the first-line treatment. According to the Tourette’s Association of America, CBIT is a non-medicated treatment consisting of three components:

“When we use CBIT to help patients with Tourette’s, we help them learn how to identify when they’re having their tics and how to use other behaviors to help control them,” said Dr. Conelea. “For example, if someone has a head jerking movement, we help them identify how their body feels when the tic is coming and then teach them a behavior that helps control the tic, such as learning how to hold their head in a still position until the need to do the tic passes.”

Unfortunately, CBIT only helps around 50 percent of those treated.

Part of the original CBIT study
When Dr. Conelea was a graduate student, she was the coordinator for the original randomized trial that tested CBIT. “It was the study upon which the current CBIT guidelines are based,” she said. “I have done a lot of research on CBIT ever since to determine what factors make controlling tics easier or harder. Over time, I became more interested in how the brain is involved.”

That interest led her to a study that tested whether one session of transcranial magnetic stimulation (TMS) could impact tics. That earlier study demonstrated that TMS did lessen the tics and made them easier to control during the time period right after the TMS procedure. 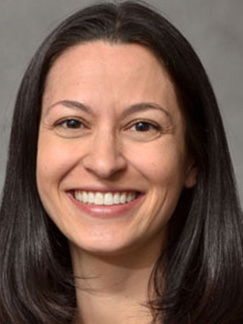 Building on that success, Dr. Conelea (pictured at left), under the auspices of the U’s Converging Approaches to Neurodevelopment Lab (CANLab), will use the NIMH grant to test an expanded combination of CBIT and TMS. “Work like this takes a big team,” she noted. “My co-investigators at the U are Suma Jacob, Kelvin Lim, Mo Chen, Alex Opitz, Bryon Mueller, and Mark Fiecas. Deanna Greene joins us from the University of California San Diego.”

The study is focused on young people between the ages of 12 and 21 who have Tourette’s syndrome or other tic disorders and are right-handed. “We want to see if we can improve CBIT’s effect by using transcranial magnetic stimulation to boost activity in specific areas of the brain,” said Dr. Conelea.

Because TMS is most effective when done repeatedly over several days, study participants sign up for treatment sessions lasting one-and-a-half hours on 10 consecutive business days. Follow-up interviews will be done at one and three months after the treatments.

Stimulating a part of the brain
During the TMS session, a technician will hold a hand-sized magnet against the patient’s head to provide the stimulation. “It induces energy that boosts how certain areas of the brain work,” said Dr. Conelea. “There is a lot of research showing that the area of the brain called the supplementary motor area is overactive in people with tic disorders. We think it interferes with the ability to control tics. This study will test if using TMS to normalize or reduce activity in that area will help make CBIT more effective. We believe it should make it easier to learn the skills, for the skills to work, and for the skills to have a longer effect.”

The plan is to enroll a total of 60 participants over the first two years of the grant. Participants will be randomized into three different groups, receiving either real or sham TMS, and one of two different TMS procedures.

Frustration of having Tourette’s
Dr. Conelea has worked with patients who have Tourette’s for 15 years. “It can be very frustrating when they don’t benefit as much from CBIT,” she said. “They want to control their tics and they just can’t. This study will be most helpful for the kids who really struggle to control their tics even before treatment. We believe it will boost their brains’ ability to do that, which should boost their confidence in being able to apply CBIT. We all feel more confident in something when it works. The hope is that we can give their brains the nudge that will make CBIT work better for them.”

Because individuals with Tourette’s might also have other conditions, such as attention deficit hyperactivity disorder, anxiety, and obsessive-compulsive disorder, the research team will measure the effect of the TMS on symptoms more broadly, as well as how the sessions affect study participants’ quality of life. “We are also doing brain imaging both before and after participation to see how the TMS affects the brain itself,” said Dr. Conelea.

“The Tourette’s community is very excited about this study,” noted Dr. Conelea. “We have already enrolled our first participant.”

Interested in learning more about the study or in enrolling?